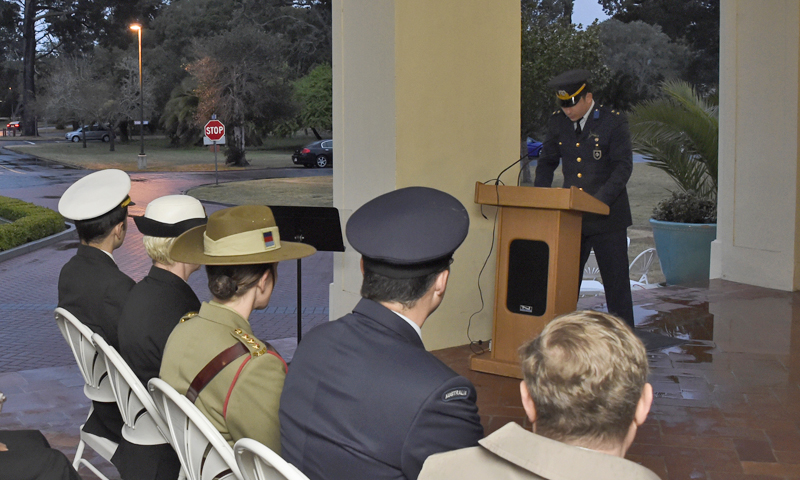 "Today is an extraordinary day, as it marks the centennial of the event," said Master of Ceremonies, Dr. David Marlow. "Therefore, today marks probably the most solemn commemorative event in Australia's history and we join millions of others around the world and troops serving overseas in remembering those who have fought and died to preserve the freedoms and ideals that we have today."

The Gallipoli campaign of 1915 set out to capture the Gallipoli peninsula to open the Dardanelles to the allied navies. The battle lasted eight months with both sides suffering heavy casualties.

"ANZAC Day is the Australian and New Zealand equivalent of Memorial Day in the U.S.," said Marlow. "It's a day we remember those who have fought and died in wars, from World War I, World War II, Korea, Malaya, Vietnam, the Gulf Wars and Afghanistan."

The service included a number of prayers, a traditional poem and a trumpeter who player reveille while the Australian and New Zealand flags were brought to half-mast. Also, retired Vice Adm. Ronald A. Route, NPS President, and Australian Maj. Matthew Scott placed two wreaths near the flagpole.

"First I would like to salute all the souls that died in the Gallipoli War," said Ilaslan. "A hundred years ago today many lives were lost during this war, however this war helped shape the modern day country of Turkey and is one of the reasons we enjoy peace and freedom today."

Every year, Turkey welcomes the families of those lost to visit their ancestors to commemorate their memory.

Today@NPS showcases some of the speakers, conferences, experiments, lectures, and other events that take place at the Naval Postgraduate School on a daily basis. If you would like more information about any of the highlighted activities please contact the Office of University Communications at pao@nps.edu.
April 2015 Title