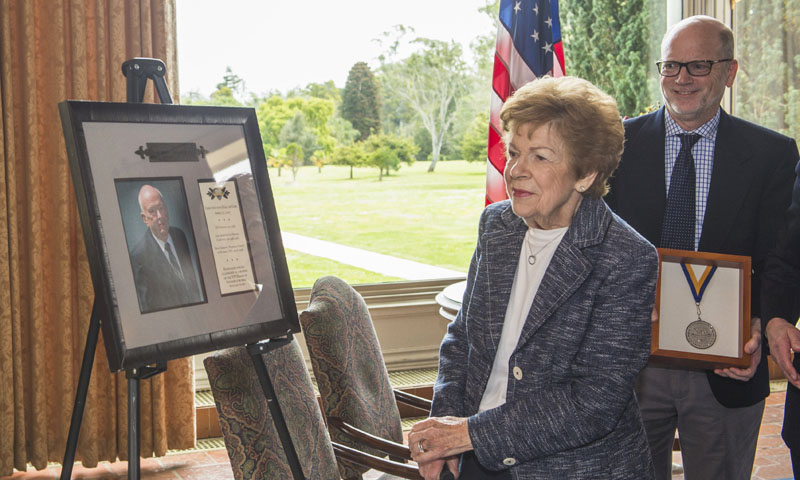 The Honorable Jack R. Borsting became the 22nd person to be inducted into the NPS Hall of Fame, April 27.

Borsting's decades-long career in academia and federal service was celebrated during a ceremony with friends, family and colleagues, followed by his official induction into the university's prestigious collective by his wife Peggy, son Eric Borsting, and NPS President retired Vice Adm. Ronald A. Route.

"On behalf of the Borsting family, I would like to thank Admiral Route and NPS for bestowing this honor on my late father," said Eric Borsting. "NPS had a special place in my father's heart, and I know as he looks down at us today he would be truly touched and honored by this recognition.

"Dad started his career here at this school, and he truly treasured the friends and colleagues he made here," Borsting continued. "We are happy that many of them are here today to celebrate this event, and hope his spirit will live on for those that follow."

Borsting served NPS in several capacities over his distinguished career in academia and federal service. He joined the faculty of NPS' Department of Operations Research in 1959, where he remained for 15 years before becoming university Provost in 1974. Following six years as NPS Provost, Borsting became the Asst. Secretary of Defense (Comptroller) from 1980-1982, appointed by both Presidents Carter and Reagan to serve as DOD's Chief Financial Officer. Borsting's career in academia then took him to universities in Miami, Florida and southern California, but his commitment and leadership to NPS remained, serving on the institution's Board of Advisors for more than 20 years.

Borsting's tenure as Provost came during a critical time in the university's history. In the three years leading up to his appointment, the student body at NPS dropped from approximately 1,800 students to 1,200, with a potential further drop to 900 students within two years. Under Borsting's leadership and savvy understanding of the Pentagon, the student population had risen back to about 1,400 when he left the position in 1980.

"Jack Borsting was an expert in face-to-face diplomacy and truly understood how to not only work with top leaders, but also with the people below," said Provost Emeritus Richard Elster. "Jack had incredibly strong characteristics. He was trustworthy, honest and incredibly energetic, and people trusted his vision. I think the best way for us to honor him is to keep doing what he did ... focus on quality, focus on mission, and love your students."

Highly decorated for his lifetime of accomplishments in both academia and federal service, Borsting was awarded the Institute for Operations Research & the Management Sciences (INFORMS) Steinhardt Prize, the Military Operations Research Society (MORS) Vance Wanner Award for Distinguished Service to the Profession, as well as Department of Defense Medal for Distinguished Public Service, which he has been awarded twice.

The NPS Hall of Fame recognizes the accomplishments of university's most distinguished alumni and friends who, through the attainment of positions at the highest levels of public service, have made the greatest contributions to society, their nations, and to the Naval Postgraduate School.

April 27, 2017
Board of Advisors on Campus for Annual Spring Meeting