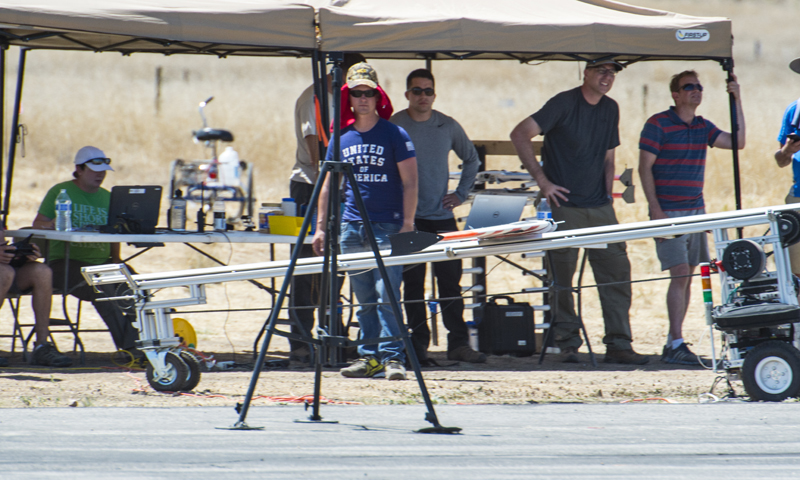 The 50 UAVs were launched and flown autonomously in two "sub-swarms" of 25 UAVs each and guided using ARSENL-developed swarm operator interfaces. The UAVs performed basic leader-follower cooperative behaviors and exchanged information amongst themselves via wireless links.

"This project came from the notion that quantity is a quality," said Chung. "It's like trying to play a game of tennis against an entire 5th grade class. If they were are all lobbing tennis balls across the court, it would be very hard to defend against them."

In the past, each aircraft would be operated by a single person, which makes for a very large footprint with many moving parts.

"One of the ways we can mitigate that is transferring autonomy. These robots can make limited decisions … that will alleviate some of the pressure on our human operators," said Chung. "Today, we were able to successfully control 50 UAVs with two operators that managed the aircrafts behaviors and health."

"Twenty years from now when aerial swarms are routinely helping farmers improve their crops, helping rescuers locate lost children, and helping warfighters to win our nation's wars, people will be able to look back at the efforts of NPS faculty and students in the skies over Camp Roberts as one of the seminal events that made such things possible," he said.

Chung noted that ARSENL's recent successes would not have been possible without the hard work and initiative of its systems engineering and cross-campus team members including NPS professors, Naval reservists, summer interns, NPS students and many more.

Today@NPS showcases some of the speakers, conferences, experiments, lectures, and other events that take place at the Naval Postgraduate School on a daily basis. If you would like more information about any of the highlighted activities please contact the Office of University Communications at pao@nps.edu.
August 2015 Title

August 24, 2015
Student Contributes His Own Perspective to Panel Discussion on ISIS

August 21, 2015
SSAG Gets Lift in Small Satellite Mission of the Year Competition