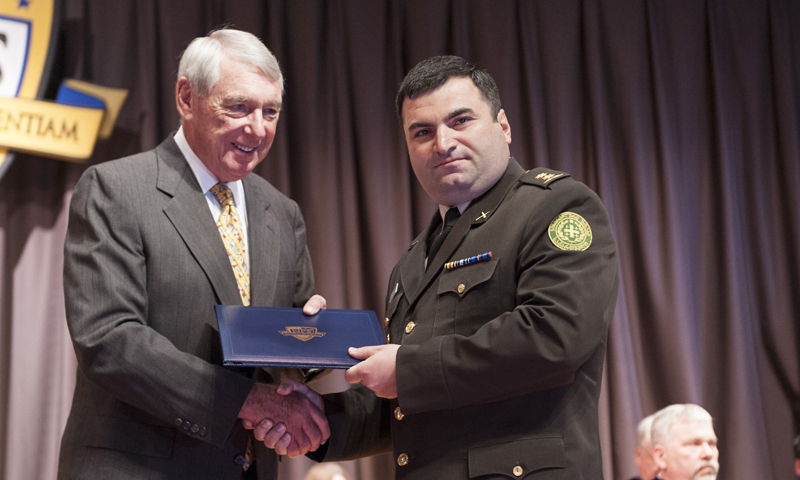 NPS alumnus Georgian Army Col. Giorgi Jachvadze is congratulated by commencement speaker retired Adm. Henry Mauz during the 2013 Winter Quarter Graduation Ceremony. Following his graduation from NPS, Jachvadze has spent the past several months leading a series of reforms within the Georgian Ministry of Defense (MOD) that overhauled his nation's military personnel system, and he directly credits his NPS education for providing the knowledge to do so.

"These reforms have been integral to advancing [The Republic of Georgia] on its path to NATO membership," added NPS Senior Lecturer retired Cmdr. Bill Hatch, who served as Jachvadze's thesis advisor.

One of the most successful of the reforms led by Jachvadze was a MOD transition to a pay-by-rank compensation system.

"Before transitioning to a pay-by-rank system, a large portion of Georgian military personnel's basic pay, about 95 percent, was defined by the position they held, and only about five percent was related to their actual rank," explained Jachvadze.

Transitioning to a pay-by-rank system was important to the Georgian MOD because the prior practice, which offered compensation based upon position, created an improper set of incentives and hampered the ability of the GAF to implement a Western style military personnel system.

Today@NPS showcases some of the speakers, conferences, experiments, lectures, and other events that take place at the Naval Postgraduate School on a daily basis. If you would like more information about any of the highlighted activities please contact the Office of University Communications at pao@nps.edu.
June 2015 Title