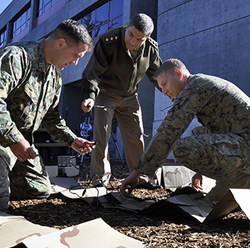 Students working with NPS’ Hastily Formed Networks (HFN) Research Group test solar panels that will provide power to their advanced network communications equipment, Nov. 15. A group of university students and faculty deployed to the Central Philippines this past weekend to support disaster relief and recovery efforts in the wake of Typhoon Haiyan.

NPS Department of Information Sciences Lecturer Brian Steckler, Director of the HFN Research Group, has already arrived in the Philippines to conduct early communications assessments, with the remainder of his team scheduled to join him shortly.

“I am working with the Marine Corps Pacific Forces Experimentation Center,” said Steckler. “My first step will be to find out where they want to use our communications capabilities and to conduct an assessment to determine local communications needs.”

HFN teams equipped with satellite-enabled, hand-held devices will conduct the assessments. While the initial assessments are being completed, Steckler hopes to use the advanced communications tools at his disposal to create hastily formed networks. If successful, his efforts will fill communications gaps allowing for increased disaster relief coordination and emergency response in some of the storm-ravaged nation’s most desperate locales. 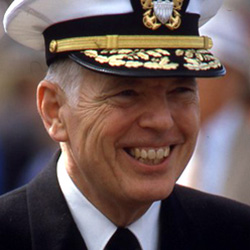 Retired Rear Adm. Robert C. Austin, pictured during his term as NPS Superintendent from July 1986 to July 1989, passed away early this month near family and loved ones in Connecticut. Austin was a firm advocate of the school during and beyond his tenure, stressing increased student enrollments and stability in faculty recruitment and retention.

Upon completion of his term as Superintendent, Austin, a 1963 physics graduate of NPS, was honored with his Fourth Gold Star in lieu of a Fifth Award of the Legion of Merit.

“Rear Admiral Austin's exceptional skill and insight as a fiscal manager resulted in the approval and implementation of numerous projects, programs, and policy improvements affecting all aspects of Navy graduate education programs,” noted the citation for the honor. “His outstanding professional skill and sense of mission allowed him to be a prime mover in major progress toward accomplishing the Chief of Naval Operations' mandate for the Naval Postgraduate School to be a flagship institution.” 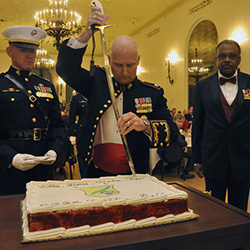 NPS Senior Marine Corps Representative Col. Mitchell McCarthy, center, uses a cutlass to cut the first slice of cake during NPS’ Marine Corps Birthday Celebration in the Barbara McNitt Ballroom, Nov. 9. The ceremony was held in honor of the Marine Corps’ 238 years of service to the nation.

California State Parks Director retired Maj. Gen. Anthony L. Jackson was the celebration’s guest of honor. His address to the assembled Marines and their families honored the sacrifices of those who made the Marine Corps what it is today.

“Remember those who have gone before you, remember those who were ready, able and willing to stand in defense of this nation regardless of the battle,” said Jackson. “You will lead the next generation of iron-willed men and women who make the United States Marine Corps. You will stand tall and you will rise above all of the challenges that confront you.”

In addition to the traditional cutting of the ceremonial cake, the adjutant’s call and the presentation of colors, attendees recognized the youngest Marine in attendance, Capt. Oryan Lopes, and the oldest Marine, WWII vet. David Birge. 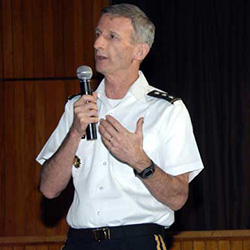 U.S. Army Deputy Chief of Staff, G-1, Lt. Gen. Howard B. Bromberg addresses Army officers from NPS and the nearby Defense Language Institute Foreign Language Center in King Auditorium, Nov. 8. Bromberg addressed the critical manpower and personnel issues Army leaders are facing back in the Pentagon, while also fielding questions from the audience.

“We are cutting back,” Bromberg said, presenting a message heard across all the services in the modern era of sequestration and its effects on the budget. Bromberg detailed manpower concerns and considerations while also delivering comment on Army Strategic Priorities across the service.

Bromberg became the U.S. Army's 46th Deputy Chief of Staff, G-1, on July 21, 2012. He is responsible for developing, managing and executing manpower and personnel plans, programs and policies for the total Army. 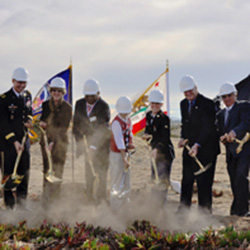 “This clinic will not only help us provide better services, but it will also strengthen our bond to the DoD,” said Lisa Freeman, Director of VA Palo Alto Health Care System. “This clinic exemplifies our motto of serving those who served.”

Farr insists that the clinic is important because it increases health care accessibility to regional veterans. “What this project boils down to is access; direct access to healthcare,” said Farr. “Many of our veterans are not able to make it to the Palo Alto VA clinic for the care they need … if you can’t physically get there and afford it, then it’s not accessible.”

Western Regional Medical Command Commander, Brig. Gen. John Cho, discussed the facilities construction and the importance of keeping faith with our nation’s veterans. “I look forward to seeing this 146-square-foot facility built. This is part of the promise, the heroes in this narrative are our veterans,” said Cho. 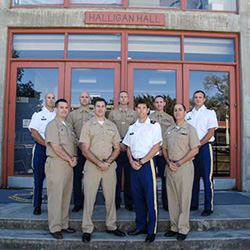 Nine of the 21 students earning academic honors from the Naval War College (NWC) Monterey Program for the fourth quarter of Academic Year 2013 gather for a group photo in front of Halligan Hall on the university campus, Nov. 5, following a brief ceremony in their honor in the NWC Monterey Program offices. 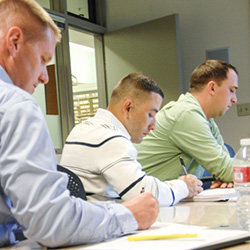 “The workshops are designed to offer a lot of information in a very short period of time. They focus on information that all writers need,” said Graduate Writing Center Director Dr. Sandy Leavitt. “The workshops also offer students a better understanding of how writing works and provide an opportunity to gain hands-on experience playing with words and expressing ideas.”

The Writing Center offers 12 workshops, twice per quarter for resident students, faculty and staff.  The center will host two more workshops this quarter, The Art and Science of Slides, Nov. 7, and Making Data Talk, Nov. 8. 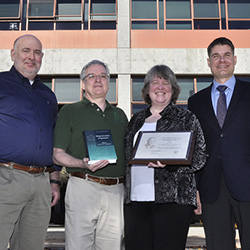 NPS Department of Operations Research faculty members Tom Lucas, Paul Sanchez, Susan Sanchez and Chris Nannini, from left to right, are pictured outside Glasgow Hall with their Koopman Prize, an award for outstanding publication in military operations research presented at the annual meeting of the Institute for Operations Research and the Management Sciences (INFORMS).

The four faculty, along with Purdue University Associate Professor Hong Wong, were recognized for their contributions to a book on experimental design and analysis, authoring a chapter for the text titled “Designs for Large-Scale Simulation Experiments with Applications to Defense and Homeland Security.”

“Our book chapter highlighted a study done for the U.S. Army on unmanned aerial vehicles,” said Lucas. “The recommendations of the study resulted in billions of dollars of savings. Moreover, we introduced recent breakthroughs in our ability to explore large computational models that others can leverage in future studies.”

The Koopman Prize was established in honor of Bernard Osgood Koopman, considered by many to be a founding father of military operations research. 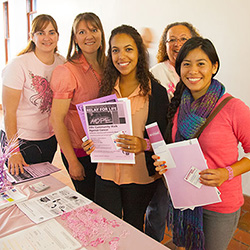 “One in eight women will be diagnosed with breast cancer in their lifetime,” said Tiffany. “Breast cancer is the most commonly diagnosed cancer in women. All of our members are affected by it, either as survivors, supporters or caregivers.” NPS Department of Information Sciences Lecturer Brian Steckler trains Cal Fire and Monterey County Sheriffs communications staff, Oct. 22, using their own mesh networking equipment similar to what he has used for years with his Hastily Formed Networks (HFN) research group. Steckler has been in the middle of some of the world’s most catastrophic natural disasters as part of his research with the HFN group. When disaster strikes, and destroyed cell towers and landlines make traditional means of communication impossible, Steckler’s team can establish a mesh network supporting a variety of devices on demand, and quickly.

Today, the NPS faculty member is a volunteer with the Monterey County Office of Emergency Services (OES) Communications Task Force, and he has made it his goal to ensure that local police, fire and state agencies get hands-on-training with the all-to-familiar equipment they’ve acquired through federal and state grants.

During last year’s North Pass Fire, and in two multi-agency first responder exercises near Big Sur, Steckler demonstrated the capabilities of the technology. With the advantages of dedicating staff to training in clear view, both Cal Fire and Monterey County have stepped up by assigning officers to train with Steckler.