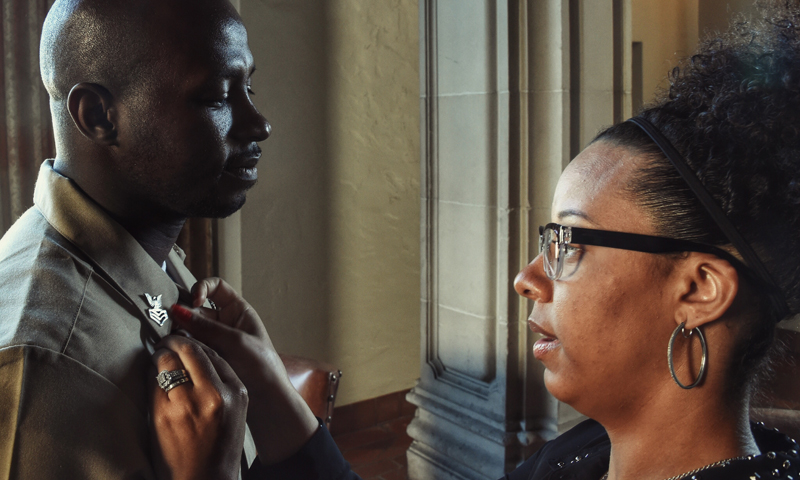 NPS Enlisted Staff Rally Around One of Their Own

Information Systems Technician 1st Class (IT1) Anthony Bowie is pinned by his wife during an awards and quarters ceremony in Herrmann Hall, Nov. 19. Bowie was promoted only after his fellow Sailors discovered an error in his scores that prevented him from advancing during the previous cycle.

"These last few months have been a struggle for me. I've been in the Navy for a little bit over 14 years and I was staring down the possibility of being forced out," said Bowie. "One day, Aviation Electronics Technician 2nd Class Scott Froom was looking over the results of his own test, and decided to look at mine too, and he saw some errors in the results."

After presenting the errors to Bowie, the two checked to see if the errors resulted in a miscalculation of Bowie's test scores; a problem that if proven true would mean Bowie would have earned promotion to 1st Class. This had major implications on the trajectory he had planned for the rest of his life, as Bowie has always thought of himself as a "Navy Lifer."

"It was a scary time for me, I couldn't think about anything else, accept where will me and my family go. And that's scary when you have people who depend on you," said Bowie. "After my first year in the Navy I knew I was going to retire Navy … maybe as a Chief and serve my family as much as I served my country. That's why I studied so hard and was so down on myself when I saw that I didn't make rank."

For the next three months, NPS' enlisted staff united in the goal of getting Bowie promoted. Froom and Operations Specialist 2nd Class Alex McCrea took the lead on the project and were ultimately successful in getting Bowie the promotion he had deserved.

"I can't say it enough, without either of them, I wouldn't be smiling right now. They both saved my Navy career … I just wish there was an award for that, or something we can give them," said Bowie emphatically, adding that he now vows to do the same for his fellow Sailors into the future.

Today@NPS showcases some of the speakers, conferences, experiments, lectures, and other events that take place at the Naval Postgraduate School on a daily basis. If you would like more information about any of the highlighted activities please contact the Office of University Communications at pao@nps.edu.
November 2015 Title

November 24, 2015
First-Ever NPS Student from the Bahamas Excels Among Peers