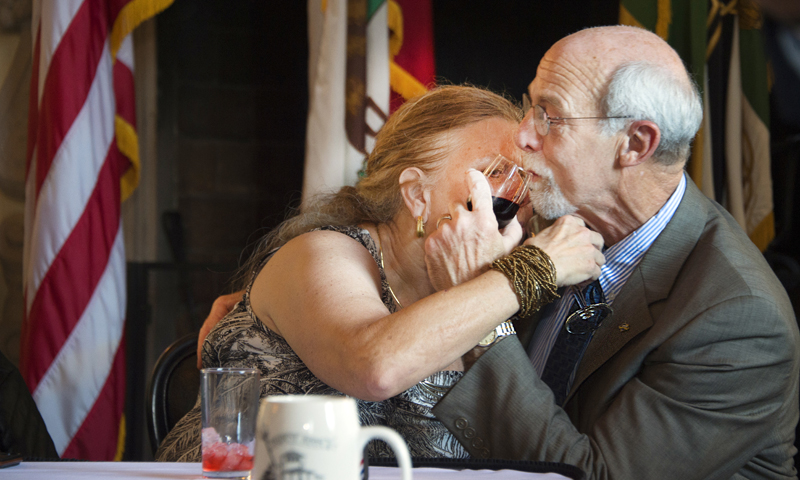 Dudley Knox Library Special Collections Manager and unofficial NPS Historian John Sanders and his wife Linda share a toast during his retirement ceremony on the Herrmann Hall Quarterdeck, Oct. 30. Sanders has been an NPS mainstay, and one of the institution's staunchest supporters, for more than three decades.

"There are a lot of things I am going to miss about NPS," said Sanders. "There's the camaraderie, and this remarkable historic property that we have. But I think at the very top, I will miss seeing the people who work so diligently at shaping the future with such an amazing level of commitment. I will miss being a part of that purpose and motivation."

Sanders came to NPS as a writer/editor with the Public Affairs Office in 1984, and served in various public affairs capacities for 24 years. Throughout his long career on campus, he has seen administrators, professors, students and colleagues come and go, and bravely battled, and won, a lengthy fight with cancer. He has done everything from helping a popular cartoonist launch his career to impersonating Bob Hope. But, Sanders says, one thing he is most proud of is his contribution to educational initiatives like the former Discovery Day program.

"We had some 5,000 kids here exploring science and technology," recalled Sanders. "Discovery Day was for the curious and imaginative. It captured what NPS was able to do for this community."

"As much as anything, it's the laughter in this place [that makes it special]," Sanders continued. "If you let yourself feel it, NPS resounds with the laughter of so many people, like Bob Hope who came here to entertain troops after WWII. These buildings echo with joy of those times."

Today@NPS showcases some of the speakers, conferences, experiments, lectures, and other events that take place at the Naval Postgraduate School on a daily basis. If you would like more information about any of the highlighted activities please contact the Office of University Communications at pao@nps.edu.
October 2015 Title