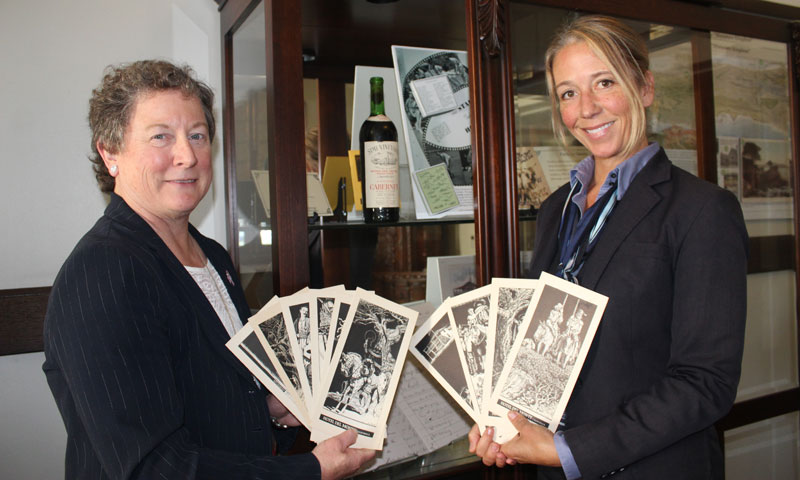 University Librarian Eleanor Uhlinger and Navy Gateway Inn and Suites accounting assistant Holly Rose hold 12 menus that were used at the Hotel Del Monte between April and July of 1937. Copies of the original menus, along with a bottle of 1941 Old Hotel Del Monte Cabernet Sauvignon from the Simi Vineyard, seen on the shelf between the duo, are the newest items on display in the NPS Welcome Center.

Curiosity and a passion for local history led to the return home of the “Old Hotel Del Monte” wine.

“The Simi Vineyard produced wines for the historic Hotel Del Monte. I discovered a framed wine label from 1880 while touring one of the mock-up rooms of the Herrmann Hall Renovation Project. The framed label was displayed as a piece of art on the wall of one of the rooms,” said Holly Rose, an administrative and accounting assistant at the Naval Support Activity Monterey Navy Gateway Inns and Suites.

Inspired by the artwork and its history, Rose began researching the winery.

“Over the next week I came across labels for Simi Vineyard Hotel Del Monte Sonoma Cabernet and a Hotel Del Monte Golden Sherry. Exploring Simi Vineyard’s website I was amazed at the parallels of history their property seemed to have with our own legacy dating back to the 1880s,” Rose added.

According to its website, the Simi Vineyard was founded in Healdsburg, Calif., by Italian immigrant brothers who produced their first wine in 1876. Meanwhile, in 1880, about 200 miles to the south, railroad baron Charles Crocker opened his luxury property the Hotel Del Monte.

“I hope to continue this wonderful nod to our heritage as art in more of the rooms,” Rose added.
Now everyone can take a step back in time and view a bottle of 1941 Old Hotel Del Monte Cabernet Sauvignon the Simi Vineyard donated to the Navy Gateway Inns and Suites, and put on display in the Welcome and Business Center.

“This is a wonderful addition to our collection of Hotel Del Monte memorabilia. I’ve enjoyed refreshing the historic displays in the Welcome and Business Center,” said Eleanor Uhlinger, University Librarian at NPS’ Dudley Knox Library.

There is also a bottle on display in the Trident Room.

“Further conversations with the Simi brand manager has her researching what it would take for us to carry a current day Simi wine with the original hotel label or similar and sell it in the Trident Room,” Rose added.

“Each menu features a black and white illustration by acclaimed artist, Jo Mora, as well as an historical anecdote in addition to a complete list of the day's Dinner Fare,” Uhlinger added.

Please visit the historic exhibits in the Hotel Del Monte Welcome and Business Center, view the menus, and ponder which Simi Vineyards wine would have most complimented your choice.

It seems the Simi Vineyards and historic Hotel Del Monte may have rekindled a 137-year tradition.
October 2017 Title

October 23, 2017
Concerts on the Lawn Returns to Hotel Del Monte