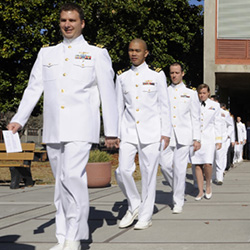 Presiding over a graduation ceremony for the final time was NPS alumna and departing Interim President, Rear Adm. Jan E. Tighe, who after welcoming the graduates and their families acknowledged the work of faculty and staff in preparing the graduates.

“Before I introduce our guest speaker, there are a few groups of people I would like to recognize,” said Tighe. “First and foremost, I would like to acknowledge our faculty and staff that made this graduation possible. Your passion and commitment to this institution and to our students is profound and very appreciated.” 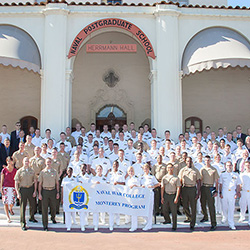 The 56th graduating class of the Naval War College (NWC) Monterey partnership with NPS for Joint Professional Military Education (JPME) stands for a group portrait on the steps of Herrmann Hall, Sept. 19.

A total of 103 U.S. Navy, Army and Marine Corps officers earned their NWC Command and Staff diploma with JPME Phase I certification this past quarter.

NWC Monterey Chairman Fred Drake spoke to the graduating students on the subjects of innovation, integrity and communication during the graduation ceremony. “We have to be innovative and agile in this climate of shifting politics and financial constraints. Too often we search for a schooled solution to complex problems, but they are not easy to find because there are variables in real life,” said Drake.

Through the NPS-NWC partnership, 3,398 officers have earned their JPME Phase I certification since the program’s inception in September 1999. 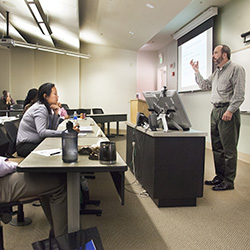 “Within a general planning, programming, budgeting and execution system framework, [the BPEA] illustrates how planning and programming support national defense objectives and priorities,” said Hladky, who also serves as the course coordinator.  “The course focuses on how this kind of system allocates resources in the budget under changing circumstances.”

Students work through several case studies designed to capture the process of translating top-level guidance and integrating it at lower organizational levels to create a defensible budget, implement funds control, and establish performance management and accountability in the resource allocation process 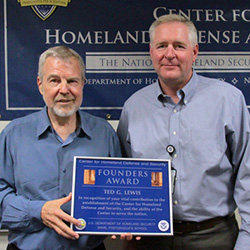 Lewis has been with the center since its inception, writing the first budget document and statement of work while playing a critical role in developing its curriculum. He has written extensively on computer science and his book, “Critical Infrastructure Protection, Defending a Networked Nation,” was the nation’s first textbook on critical infrastructure protection.

“This program [CHDS] is based on the quality of Ted’s leadership,” Woodbury said. “Ted has taught us how to push the envelope as far as possible.”

Woodbury further lauded Lewis for his ability to drive faculty, students and staff to think beyond the obvious to maintain the center’s leading edge academics. As Lewis said, “If things are running smoothly, it’s time to throw some sand in the gears.” 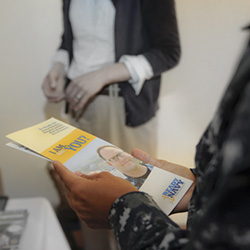 “You should always have a plan,” said NSAM Emergency Management Officer Dave Yeager. “Do you have your shot records, your pets’ shot records … these are the things people don’t think to have.”

Emergencies can happen quickly, officials stress, and you may need to evacuate quickly and not have time to gather or shop for supplies. “We are here to help get people ready for all types of emergencies,” said FFSC Site Director Jodi Pallett. “Not just for natural disasters but manmade hazards as will as domestic threats. 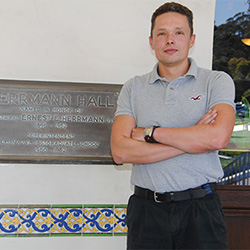 German Army Maj. Tobias Treml has been selected as one of two Summer Quarter recipients of the Outstanding Academic Achievement Award for International Students. Treml was recognized along with Singaporean foreign national Lee Hsu Ann Daryl.

An operations research student, Treml performed his thesis research on the development of a model-based, systems engineering approach in determining specifications for future ground combat vehicles. “Operations research, even though I’d never heard of it before, is very helpful,” said Treml. “Especially at NPS … The curriculum is very practical and it can be implemented in so many places all around the world. It was a great opportunity.”

Treml felt honored in receiving the academic recognition but he was especially thankful for the lessons learned, he said.  A new father, he was particularly excited about the new addition to his family. “My greatest achievement. She’s the first American in the family,” he said. 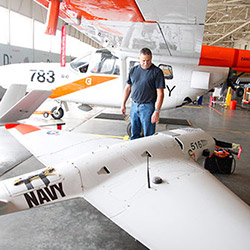 “The Twin Otter aircraft will be used to support post-doctoral atmospheric science and oceanography research,” said CIRPAS Director Bob Bluth. “It will also be used to monitor the Monterey Bay Marine Sanctuary’s eco-system.”

CIRPAS’ new Twin Otter was used previously by the U.S. Army Golden Knights Parachute Demonstration Team, and will undergo a 3-to-5 year refitting process before it begins its new life as a research aircraft. Also recently acquired was an S-band radar system previously used in Army counter artillery operations. It will also be extensively modified to be used by CIRPAS researchers to study the formation of tornadoes throughout the Midwest’s infamous “tornado alley.” 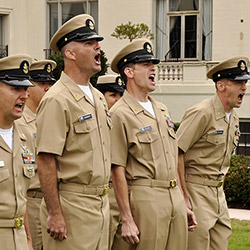 The Monterey area's newest Chief Petty Officers bow their heads in thanks at a pinning ceremony in front of NPS’ Herrmann Hall, Sept. 13. Area commands advanced four Sailors to the rank of Chief Petty Officer (CPO). The ceremony featured chief selects from the Center for Information Dominance Unit (CIDU) and the Fleet Numerical Meteorology and Oceanography Center (FNMOC).

During the event, the newly-appointed chiefs were ceremonially pinned to the rank of CPO by family members and fellow chiefs. The pinning is the conclusion of a six-week training program designed to give the Sailors a better understanding of what it means to be a Navy chief. 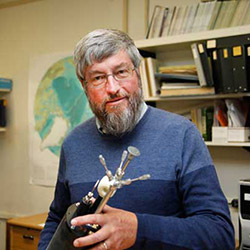 Oceanography Research Professor Tim Stanton is pictured with his Ocean Flux Profiler, an instrumentation package he designed and built, and along with a team of researchers, deployed beneath Antarctica’s Pine Island Glacier to measure the rate at which glacial ice is melting from below. The results of the research team’s landmark study are published in the Sept. 13 edition of Science magazine.

Stanton and Truffer have been working for years with colleagues from Pennsylvania State University, NASA, the British Antarctic Survey, and New York University in an effort, funded primarily by the National Science Foundation, to measure these effects. Their efforts are expected to vastly improve models of the global effects of climate change on sea-level rise. 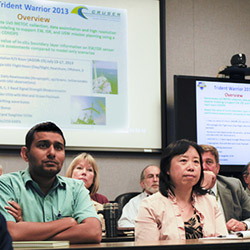 Traditionally held in Root Hall on campus, CRUSER’s monthly meetings provide a collaborative forum for discussing topics of interest and current research in the areas of robotics, unmanned systems and more.

“These meetings are open to everyone,” emphasized NPS Department of Information Science Senior Lecturer Steven Iatrou. 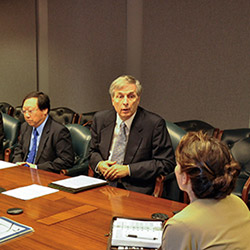 Dr. Thomas Hanley, chair of the ABET Engineering Accreditation Commission NPS evaluation team, leads a final outbrief of their visit to campus leaders in the Elster Conference Room, Sept. 10. The accreditation team spent two days visiting NPS for an evaluation of five engineering programs through the Graduate School of Engineering and Applied Sciences.

“We’d like to begin by thanking the Naval Postgraduate School and its officers, deans, faculty, staff and students for the time and effort that they all invested to ensure our time and visit was productive,” said Hanley, a professor of chemical engineering at Auburn University. “They were cooperative, and we were able to get full and candid answers to our questions.”

With the university’s relevant programs last awarded ABET accreditation in 2007, the visit marks the initiation of the reaccreditation process. Established in 1932 as the Engineers’ Council for Professional Development, renamed the Accreditation Board of Engineering and Technology in 1980, and officially changed to simply ABET in 2005, the organization accredits more than 3,100 programs at 600 colleges and universities worldwide. 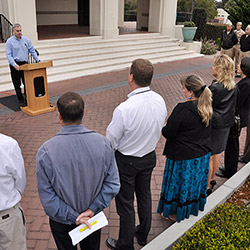 Dudley Knox Library’s newest addition is complete and serving up Starbucks coffee. NPS Police Officers Sal Araujo, left, and Zachary Reiner, right, were the first in line to order their favorite beverages when the café opened for business, Aug. 9.

“We hope this will be your neighborhood spot to study, take a moment to unwind, grab a well-deserved treat, or meet with friends,” said Naval Support Activity Monterey Commanding Officer Capt. Gerral David.

The site offers worktables and plenty of study areas for students as they enjoy a cup of their favorite beverage. 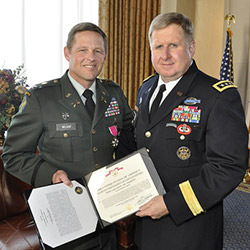 Wilson was applauded by both colleagues and family members alike for a highlight of his 28-year military career – his role in rescuing three hostages from the Revolutionary Armed Forces of Colombia (FARC) during Operation Jaque in 2008.

Wilson is wrapping up his third stint at NPS, where as Co-Director of the defense analysis department’s CORE Lab with Dr. Sean Everton, he has continued to build his reputation as a “soldier scholar.” Herrmann Hall will undergo a major renovation over the next six months. The recently-erected exterior scaffolding, pictured above, represents the first phase in a series of much-needed repairs.

The $6.4 million project addresses the need for increased energy efficiency and the conservation of resources. Project managers also hope their efforts will lead to increased occupant productivity and comfort.

Renovations are scheduled to include, amongst other things, repairs and modification to the La Novia Terrace, the Tower Room, and the sand blasting and exterior painting of Herrmann Hall. 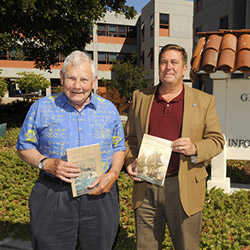 Hughes’ paper, “Naval Operations: A Close Look at the Operational Level of War at Sea,” won first place, and Hughes’ and Kline’s co-authored, “Between Peace and the Air-Sea Battle: A War at Sea Strategy,” took second-place honors. 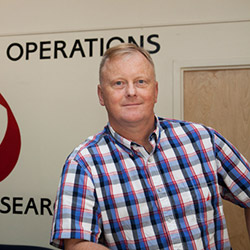 Markowski is quick to credit much of his success over the last eight years to the education he received at the university. “After I graduated in December of ‘04, I immediately went to work in different staff positions, and the critical thinking skills I learned at NPS helped me in all of them,” said Markowski. “NPS is the best education in the military, bar none. ”

“I look forward to mentoring the junior officers in the department as part of my greater contribution,” he noted. 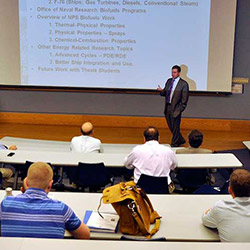 “With this lecture, we are looking to convey what MAE is doing in the area of alternative fuels and advanced combustion cycles which utilize a detonation-based combustion modification,” said Brophy.

Although the lecture was designed to be broad, it touched on specific research programs sponsored by the Office of Naval Research, including research into the combustion properties of drop-in biofuel replacements for both ships and aircraft.