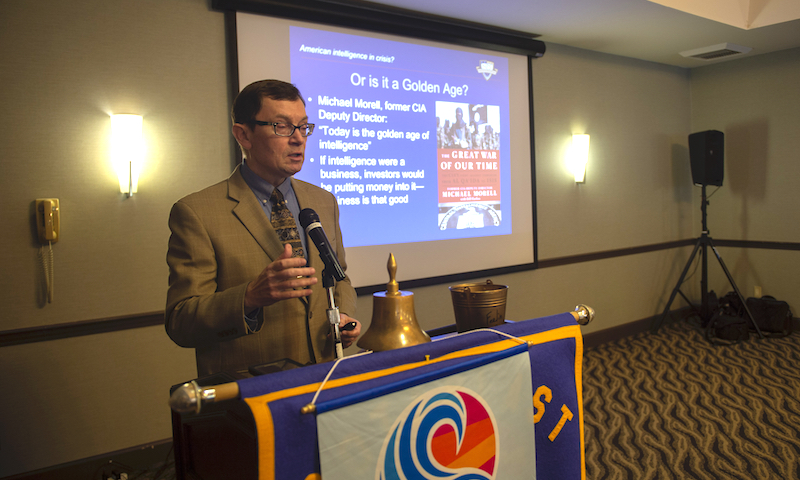 Early in his remarks to the community group, Dahl shared an insight from a past senior intel leader that stuck with him, highlighting the persistent change the nation and world is constantly faced with.

“A comment that really resonates with me was offered by former Director of National Intelligence Jim Clapper, noting that the challenges facing our country and our intelligence system today are more difficult to deal with than anything he had seen in 50 years,” said Dahl.

“We as a nation, the international community and our intelligence system are facing many different types of challenges then we had back during the Cold War,” he continued. “But at least back then, we knew what the enemy was. Today, the challenges, and the enemy, are so varied and different.”

One of the more persistent modern challenges, Dahl noted, is the intelligence community’s need to focus on domestic terrorism ... issues they did not have during the Cold War.

“Today, since 9/11, our intelligence community has to watch us,” said Dahl. “Whether the threat is terrorism or school shootings, these are challenges that we once didn’t have to face.”

Dahl offered an insider’s perspective on the breakdowns in communication that led to the terrorist attacks on 9/11.

“The most common answer to the question of why 9/11 happened is because we weren't sharing intelligence among all of the different agencies of government, up and down the chain of the federal government, and at local levels,” said Dahl. “Today, we've been trying to do much better at that.”

Additionally, Dahl added that the intelligence community no longer has a monopoly on intelligence, as the media and private sector can now access intelligence sources through their own means.

“We have a new paradigm today,” said Dahl, displaying an open source, detailed satellite image of North Korea. “Open source and unclassified information, whether it’s the media or even private companies, are competing with the intelligence community.

“When I was working on Korean issues, we did not have to worry about somebody else popping up on the web to compete with my intelligence assessment of North Korea,” he noted.

Today@NPS showcases some of the speakers, conferences, experiments, lectures, and other events that take place at the Naval Postgraduate School on a daily basis. If you would like more information about any of the highlighted activities please contact the Office of University Communications at pao@nps.edu.
September 2018 Title