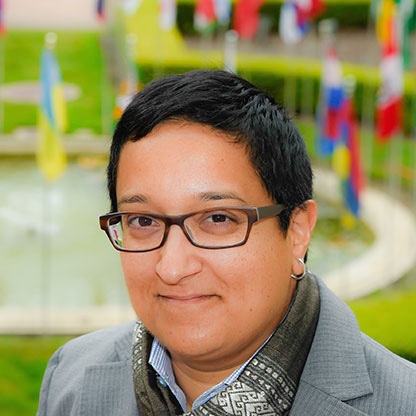 
Naazneen H. Barma is Associate Professor of National Security Affairs at the Naval Postgraduate School. Her research and teaching focus on the political economy of development, post-conflict peacebuilding and political order, and natural resource governance, with a regional specialization in East Asia and the Pacific.

Dr. Barma is currently working on a collaborative research project, funded by the Minerva Initiative, that examines the relationship between state-building and peace-building through the lens of public service delivery in Cambodia, Laos, and Uganda. Her peer-reviewed academic research has been published in several refereed journals and edited volumes. She is author, co-author, and co-editor of four books. She has also co-authored policy-oriented pieces on global political economic order that have appeared in Democracy: A Journal of Ideas, Foreign Policy, and The National Interest.

Dr. Barma received her PhD (2007) and MA (2002) in Political Science from the University of California, Berkeley. For her dissertation project, she won a Jennings Randolph Peace Scholarship from the United States Institute of Peace. She earned both her BA (1996) in International Relations and Economics and her MA (1997) in International Policy Studies from Stanford University. From 2007–2010, Dr. Barma was a Young Professional and Public Sector Specialist at the World Bank, where she conducted political economy analysis and worked on operational dimensions of governance and institutional reform in the East Asia Pacific Region. She is a founding member and co-director of Bridging the Gap, an initiative devoted to enhancing the policy impact of contemporary international affairs scholarship.

Special Topics in the Political Economy of Development

"'Imagine a World in Which': Using Scenarios in Political Science."  International Studies Perspectives 17 (2). May 2016 (with Brent Durbin, Eric Lorber, and Rachel E. Whitlark).