The following is an archive of NWSI news items and event recordings in reverse chronological order since the institute was founded on 30 May 2020. Current news is posted on the NWSI home page and upcoming events are posted on the NWSI Events page.

7 April 2021: Energy Academic Group (EAG) publishes the 2021 2nd Quarter edition of their newsletter, Surge. The quarterly publication provides easy access to EAG activities, energy-related projects across the DOD, NATO, Academia, and Industry, and provides a pathway for student energy thesis research. As one of the cross-cutting Academic Groups at NPS, EAG’s mission is to become a Center of Excellence for Defense Energy. Please visit EAG's website at https://nps.edu/energy for the most current information on EAG activity and events.

April 2021:  Click here and listen to an hour long video of the CNO’s interview with the Center for a New America Security.  During this discussion he touches on the Future Naval Force Structure study and actions to achieve it, the geo-political environment in the Western Pacific, and Navy personnel matters. CNO ties together doctrine, strategy and experimentation focused advancing Naval Force’s warfighting capabilities using Unmanned Systems.

NWSI News - Maneuver Warfare, Learning, Thinking from FMFM-1 to MCDP-7 and Beyond

17 March 2021: The NWSI Critical Thinking and Judgement branch hosted an interactive discussion on Maneuver Warfare, MCDP-7, and the importance of Learning in the Cognitive Era. The event featured student research in support of MCDP-7 and Maneuver Warfare, discussing the past and future of learning, critical thinking and maneuver warfare. For more details on the discussion please read this summary of the event.

16 March 2021: Department of the Navy publishes Unmanned Campaign Framework. "The Department of the Navy is moving with purpose to innovate and adapt new technology to build a more lethal and distributed naval force for the future. To compete and win in an era of great power competition, the Department is committed to investing in advanced autonomy, robust networks, and unmanned systems to create true integrated human-machine teaming that is ubiquitous across the fleet." - Thomas W. Harker, Secretary of the Navy (Acting)

2 March 2021: NWSI member LTC McCoy publishes article with the Modern War Institute. BUILDING THE NEXT GENERATION OF BOYDS, HOPPERS, KRULAKS AND PATTONS "Among technologists, there is an anecdote about a senior military officer who didn’t fully understand the capabilities and limitations of his intelligence, surveillance, and reconnaissance (ISR) assets. The story is said to have taken place at some point in the last decade, when this senior officer, a joint task force commander, was advised of his ISR requests being denied—only to receive a satellite asset at the last minute."

March 2021: The Marine Corps Logistics Innovation Office releases their monthly newsletter. March's newsletter focuses on "breaking the land-centric mindset" and contains a series of articles related to Expeditionary Advanced Base and Distributed Maritime Operations. The articles are examples of how the Marine Corps continues to shift away from the current organization and towards the future operating environment. 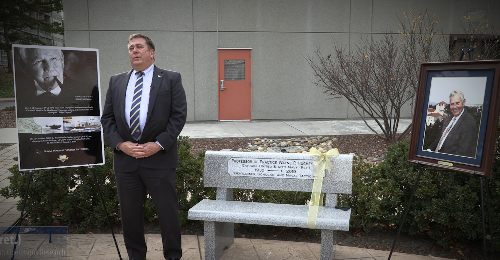 Friday 11 December 2020: NWSI leadership dedicated a bench in the memory of the late CAPT Wayne P. Hughes USN (ret) in the Glasgow Courtyard on the campus of the Naval Postgraduate School in Monterey. See the video of the ceremony posted thanks to the NPS Dudley Knox Library.

17 November 2020: Congratulations to Jeff Appleget, Jeff Kline, and Rob Burks for their publication to the Center for International Maritime Security! Their article, "Revamping Wargaming Education for U.S. Department of Defense," provides compelling points on the importance of wargaming and advocates for increased wargaming education for military officers. The full article can be read here.

16 November 2020: "Craft of Wargaming" on USNI Proceedings Podcast.  Listen to Jeff Appleget, Robert Burks, and Fred Cameron, the authors of the new book "The Craft of Wargaming," on the U.S. Naval Institute Proceedings Podcast, discuss how to run a successful wargame and how military leaders can avoid drawing the wrong conclusions from the results.

13 November 2020: Congratulations to NWSI's own Lyla Englehorn for her recent article published in Future Force Magazine! The article (pp 22-24) highlights NPS's Robotics Engineering certificate program which aims to provide a flexible learning experience that instills the essential concepts and skills necessary to understand, design, and operate robotic systems. The program is designed to contribute to and expand the fledgling “Naval Innovation Ecosystem," by focusing on the critical field of naval robotics. For more information, please go to their website, or email robotics.certificate@nps.edu.

12 November 2020: CRUSER Selects FY21 Research Seed Funding. CRUSER is pleased to announce the seed research proposal selections for 2021. The CRUSER Advisory Group (CAG), co-chaired by the Dean of Research and the CRUSER Director, and consisting of past CRUSER directors, NPS Warfare Chairs, and the senior military service representatives met on October 20th to review the FY21 proposals. This year’s solicited research themes were:  1) Autonomy Modeling and Simulation (A-M&S), 2) Autonomy Enabled Ocean Science, 3) Autonomy in Context, and 4) Autonomy at large.

All recordings are posted here in reverse chronological order and are cleared for unlimited distribution.

30 MARCH 2021 The NPS Alumni Association and Foundation hosted Elsa Kania, author of Myths and Realities of China’s Military-Civil Fusion, Elizabeth Gooch, Assistant Professor at the Naval Postgraduate School, and Maj Erin Moubry for a fascinating discussion of how China leverages military-civil fusion to compete on the international stage. The authors explored the myths and realities of Chinese power and how it is wielded. They also discussed how and where the Chinese narrative is succeeding or failing to better understand the opportunity space for decision-makers at all levels.

2 MARCH 2021 The Naval Warfare Studies Institute of the Naval Postgraduate School presented the second of two panel discussions on Quantum Information Science (QIS) and its implications for the Department of Defense. In this second panel "Quantum Computing" moderator Dr. Paul Lopata, Principal Director for Quantum Science (OUSD R&E) was joined by experts from DoD, academia and industry to discuss these emerging technologies and how QIS may prevent or create strategic surprise.

9 FEBRUARY 2021 The Naval Warfare Studies Institute (NWSI) of the Naval Postgraduate School hosted a virtual discussion on the recently issued Tri-Service Maritime Strategy: Advantage at Sea. Moderated by NWSI Deputy Director Col Randy Pugh (USMC), the authors from U.S. Navy, Marine Corps, and Coast Guard discussed this strategy that "provides strategic guidance on how the sea services will prevail in day-to-day competition, crisis, and conflict over the next decade”.

17 FEBRUARY 2021 The Naval Warfare Studies Institute (NWSI) of the Naval Postgraduate School hosted a discussion on the "How the Fleet Forgot to Fight" series by Dmitry Filipoff of CIMSEC. The series examines the theme of the normalization of deviation across the Navy’s high-end force development, combat training, firepower, strategy, and more. It looks at the ramifications of the Navy’s shift toward power projection after the end of the Cold War and how this will shape the Navy’s transition toward great power competition and its ability to win high-end conflict today.

25 FEBRUARY 2021 the NPS Alumni Association and Foundation hosted Col (Ret) Bill Vivian, author of Marine Corps Doctrinal Publication 1-4Competing, Ryan Evans, editor of War on the Rocks, and Dr. Leo Blanken of the Naval Postgraduate School, Co-founder of Applied Design for Innovation in a discussion about how they are reframing great power competition from their unique perspectives and how that evolving understanding will shape national security over the next several years.