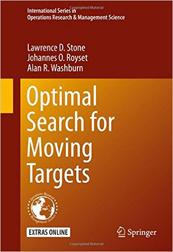 This book begins with a review of basic results in optimal search for a stationary target. It then develops the theory of optimal search for a moving target, providing algorithms for computing optimal plans and examples of their use. Next it develops methods for computing optimal search plans involving multiple targets and multiple searchers with realistic operational constraints on search movement. These results assume that the target does not react to the search. In the final chapter there is a brief overview of mostly military problems where the target tries to avoid being found as well as rescue or rendezvous problems where the target and the searcher cooperate. 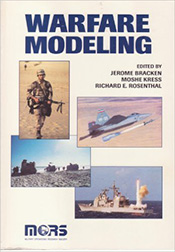 A compendium of warfare modeling by cross disciplinary experts. A must for any serious warfare or gaming modeler. 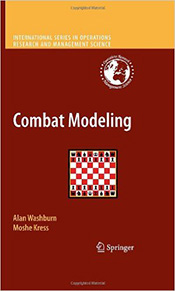 Combat Modeling is a systematic learning resource and reference text for the quantitative analysis of combat. After a brief overview, authors Washburn and Kress present individual chapters on shooting without feedback; shooting with feedback; target defense; attrition models; game theory and wargames; search; unmanned aerial vehicles; and terror and insurgency. Three appendices provide a review of basic probability concepts, probability distributions, and Markov models; an introduction to optimization models; and a discussion of Monte-Carlo simulations. Drawing on their many years of experience at the Naval Postgraduate School in Monterey, California, Washburn and Kress have created a reference that will provide the tools and techniques for analysts involved in the underpinnings of combat decisions. This is a book that can be used as a military manual, reference book, and textbook for military courses on this vital subject.

Operational Logistics: The Art and Science of Sustaining Military Operations 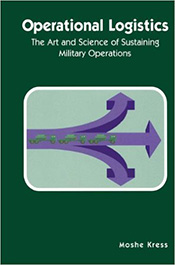 Operational Logistics: The Art and Science of Sustaining Military Operations explores military logistics in terms of the theoretical foundations of operational logistics (OpLog) and its applications. The theoretical foundations are examined with regard to two dimensions. First, the artistic or qualitative aspects of contemporary logistics are looked at in the context of the operational level of war. These OpLog aspects include principles, imperatives and tenets, which are stated and analyzed. The second dimension relates to the scientific aspects of logistics. It is manifested by a formal network model that represents the structural and operational features of an OpLog system. Hence the book examines both artistic and scientific dimensions of military logistics and integrates the respective qualitative and quantitative aspects into a unified and definitive presentation of operational logistics. 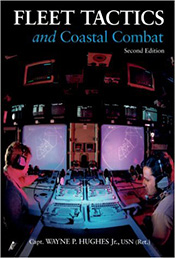 This major revision updates Wayne Hughes's 1986 landmark study that is credited with providing decision makers a sound foundation for battle planning and tactical thinking. The book integrates the historical evolution of tactics, analysis, and fleet operations, and today it can serve as a primer for anyone who wants to learn how navies fight and win. This second edition includes much new material on combat in the missile age and reflects the reconfiguration of many tactics for littoral operations after the fall of the Soviet Union.

See all OR Department Technical Reports.

A scale-independent, noise-resistant dissimilarity for tree-based clustering of mixed data

Clustering techniques divide observations into groups. Current techniques usually rely on measurements of dissimilarities between pairs of observations, between pairs of clusters, and between an observation and a cluster. In our scheme, we fit a set of regression or classification trees with each variable acting in turn as the “response" variable. Points are “close" to one another if they tend to appear in the same leaves of these trees.Trees with poor predictive power are discarded. We demonstrate the performance of this technique by using these dissimilarities to cluster some well-known data sets to which noise has been added.

We develop a new measure of reliability, called cumulative mean bounds, that assesses the mean behavior of a process by calculating the probability that the cumulative sample mean will stay below its long-term sample mean, with a given tolerance, over a period of time. In this report, we provide a derivation of a lower bound for the measure when the underlying data are independent and identically distributed with a normal distribution.This derivation provides a preliminary basis for parallel extensions to the two-sided limiting case when we calculate the probability that the sample mean stays within a given distance from the true mean when the assumptions of independence and normality are removed.

A comparison between the 3/9 and the 5/10 watchbills

This is the second phase of a longitudinal study comparing the fatigue levels, workload, and performance of crewmembers working on the 3-hrs on/9-hrs off (3/9) and the 5-hrs on/10-hrs off (5/10) watchstanding schedules. Crewmembers from the Reactor Department on the USS NIMITZ (N=117, 24.6±3.89 years old, 95 males, 109 enlisted, with 4.25±2.65 years of active duty) participated in this study. Results show that the 3/9 is better than the 5/10 in terms of sleep quality, subjective levels of fatigue, mood, psychomotor vigilance performance, and acceptance by the Sailors. Although crewmembers on both the 5/10 and the 3/9 received, on average, approximately seven hours of sleep per day, the sleep hygiene and acceptance of the two schedules differ considerably.

Environmental motion can affect shipboard sleep of crewmembers. Slamming and similar harsh motion may interfere with sleep, whereas mild motion and sopite syndrome may enhance sleep. If sleep needs vary by sea condition, this factor should be considered when assessing human performance at sea. The goal of this study was to assess sleep duration in different sea conditions.

This paper describes treeClust, an R package that produces dissimilarities useful for clustering. These dissimilarities arise from a set of classification or regression trees, one with each variable in the data acting in turn as a the response, and all others as predictors. This use of trees produces dissimilarities that are insensitive to scaling, benefit from automatic variable selection, and appear to perform well. The software allows a number of options to be set, affecting the set of objects returned in the call; the user can also specify a clustering algorithm and, optionally, return only the clustering vector. The package can also generate a numeric data set whose inter-point distances relate to the treeClust ones; such a numeric data set can be much smaller than the vector of inter-point dissimilarities, a useful feature in big data sets.