While I was a graduate student, I got interested in some of the ATS-6 observations of PC5 pulsations.  The standing Alfven wave appealed to me.  We got one on Dynamics Explorer. Plasma and Field Observations of a Pc 5 Wave Event.  It was more or less the first time anybody had directly measured the mass loading for the oscillation directly from the plasma.

Later, I had a student who studied a particularly nice event from SCATHA.  Patterson (1987): Observations of a hydromagnetic wave in the earth's magnetosphere.  I gave an IAGA talk on this, but could never convince myself there was enough new to warrant publishing. The work showed pretty good agreement between the floating probe measured field and the field inferred from the plasma bulk motion, but as I recall the floating probe was low by a factor of 2 or so. I think Tom Aggson was actually pretty happy with that assessment. 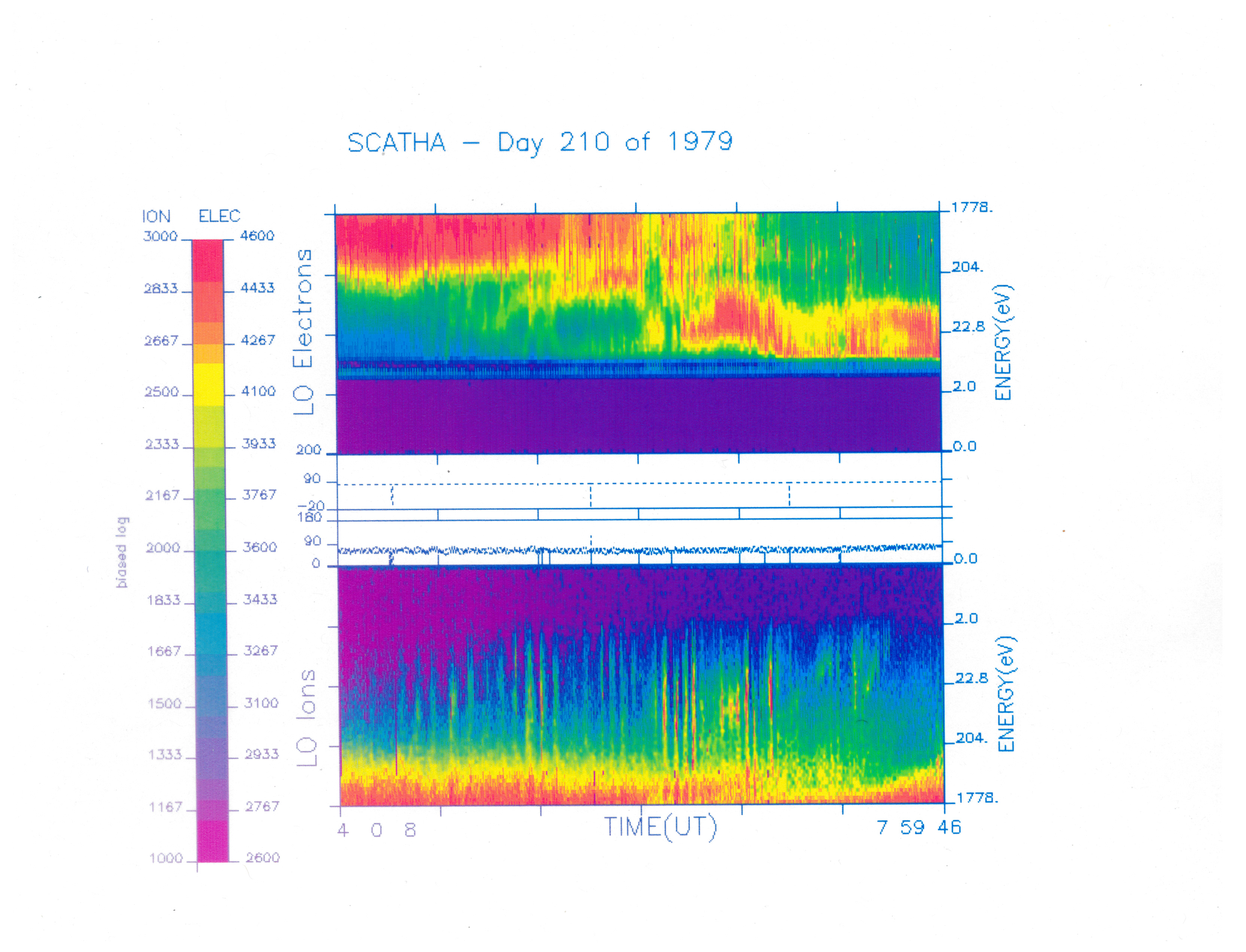 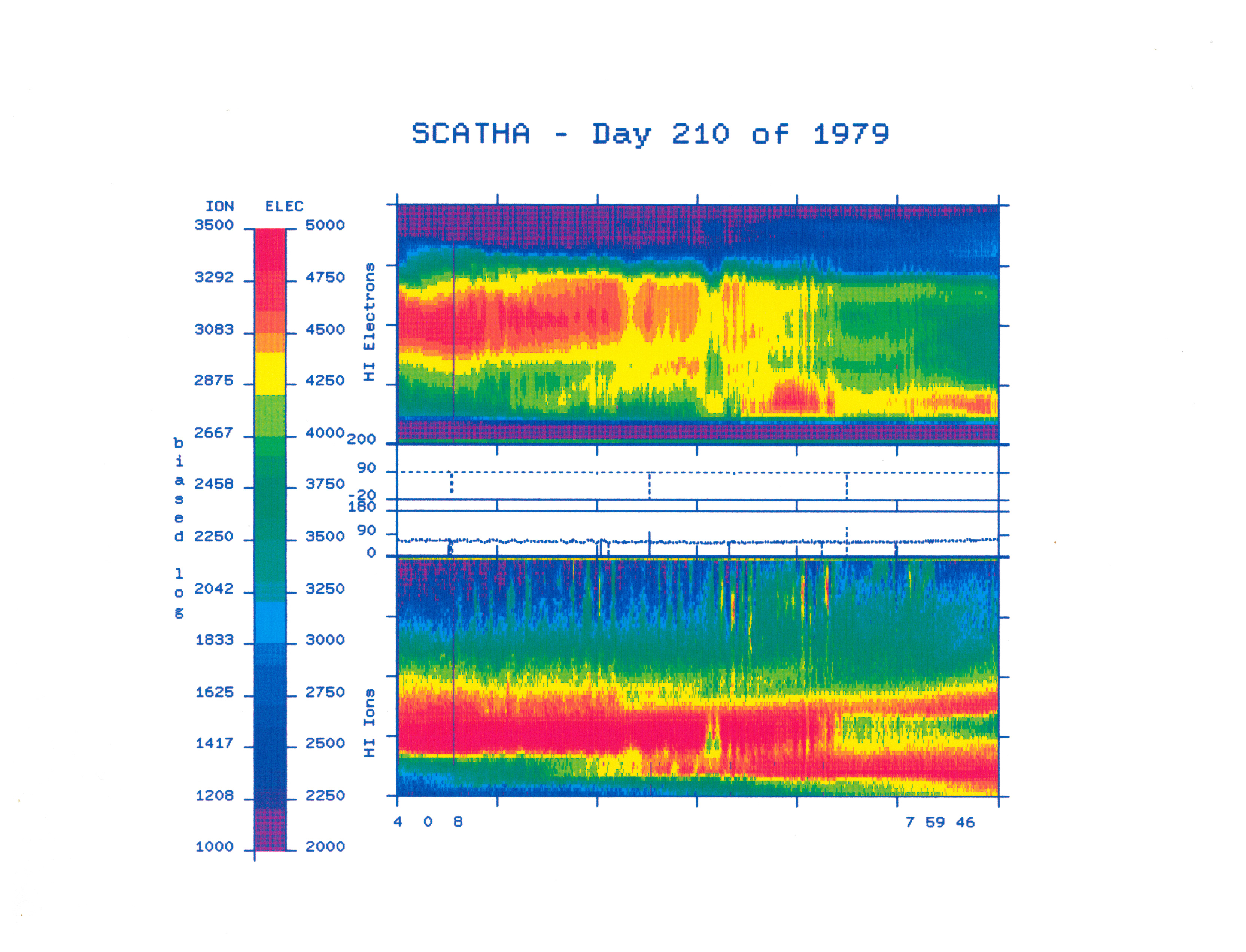 The spectrograms for the micropulsation weren't published, as nearly as I can recall.  Click on these to see the larger versions.  Pretty primitive - this is what I could do with IDL and that HP Paint Jet early on (MicroVax II).  Four hour data summaries.  The orbit for this interval is shown below on the right, from an STK simulation... {In the same time-frame - Pc 5 pulsations in the outer dawn magnetosphere seen by ISEE 1 and 2, DG Mitchell et al, 1990, JGR}

SCATHA was sort of the last gasp of the unbiased floating probe technology - ultimately the active bias folks - Forest Mozer (UCB) and Arne Pedersen et al in ESTEC, won out.  This is mostly because in tenuous plasmas, the effects of photoemission on floating probes is pretty difficult to remove from the data.  Of course, if you make your measurements in eclipse, you don't have this problem.  This thought leads to the paper: Observations of Electric Fields Near the Plasmapause at Midnight (1986).  (Shu Lai worked out the daylight measurements: Boom potential of a rotating satellite in sunlight, 1986)

Pierrette Decreau and her family came to Huntsville for a post-doc, before she took up her regular duties back in France (she became a PI on Cluster, so she did well).  For reasons I'm a little fuzzy on, I'm a co-author on a study of plasmasphere filling she did.  Latitudinal Plasma Distribution In The Dusk Plasmaspheric Bulge

In a similar vein,  Tsugunobu Nagai came to Huntsville for a post-doctoral appointment.  He's made a lot of progress on substorms since then, and has risen to a pretty nice position, as I recently noticed.

(I was also a co-I on his Polar Wind article, with somewhat more justification).

From Patterson (1987) - the period goes as L4 - observable here because SCATHA was not quite geosynchronous.

We could measure the electric field, magnetic field, and plasma, and got pretty good estimates for the mass density by fitting the ion distribution functions. 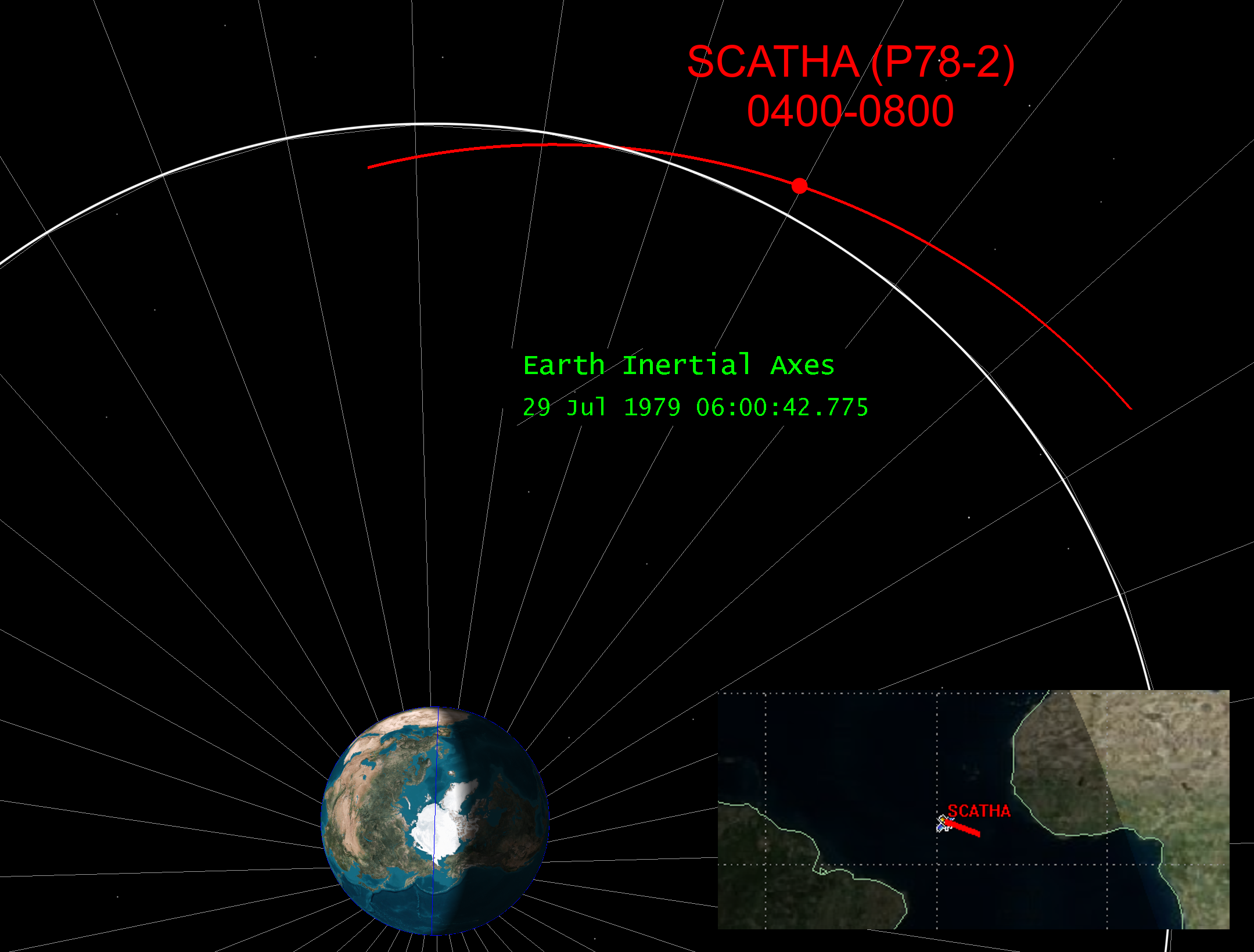 At the time, we didn't have STK - here the satellite orbit off the coast of Africa for 4 hours on Day 210, for the micropulsation event.