In a bit of a pre-cursor to the work begun a decade later, Charles Cassidy (1995) looked at the use of LiDAR for (littoral ocean) mine detection.  Things really got started with Michale Helt (2005) studying the classification of vegetation at the Elkhorn Slough, following my first contracted airborne LiDAR flight.

The work expanded significantly in 2007, with Fermin Espinoza and Robb Owens looking at the ability to find trails under thick jungle canopy.  Identifying Roads And Trails Hidden Under Canopy Using Lidar.   A followup thesis by two of our Greek students reinforced that work (2008) We made some attempts at automating a pretty intensive manual process (Muha, 2011; Harmon 2011) .  The success level was fairly modest, in part because we didn't really have a thick enough canopy in our datasets (it was too easy just to see the trails).

LiDAR waveforms are not heavily exploited in the larger LiDAR community, but the idea of working with spectra is something that corresponded to a great deal of prior work in spectral imaging (HSI), as well as work in space plasma physics with electron and ion distribution functions.  Neal Battaglia worked on data from Calipso (Utility of Satellite LiDAR Waveform Data in Shallow Water, 2010); and Angie KIm built an elegant Monte Carlo code to simulate lidar propagation through tree canopies.  (Simulating Full-Waveform LiDAR; 2009; ASPRS, 2010;  SPIE, 2015)

I had this peculiar idea that we could step back in time wrt LiDAR, and collect a transect on a flightline by turning off the angular sweep on the Optech C-200 scanner.  This produced a very heavily sampled dataset to allow for consideration of the variability in lidar measurements, at least in a purely nadir view.  I presented this at the Optech ILSC in 2013.  "Lidar transect analysis with very high point density" Strictly speaking, not a publication of any sort - but interesting.

We finally got some really good airborne waveform data, and I started to apply the techniques we developed for spectral imaging and space plasma physics (magnetospheric physics).  Olsen, 2017. (Preprint); PowerPoint

We did some exploratory work looking at the relative characteristics of traditional 'analog' systems compared to photon counting technology from Sigma Space (Kim, 2015). 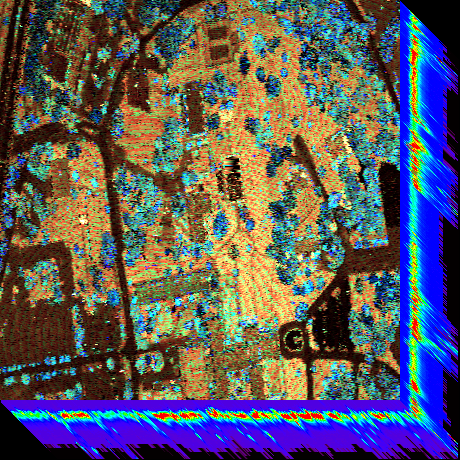