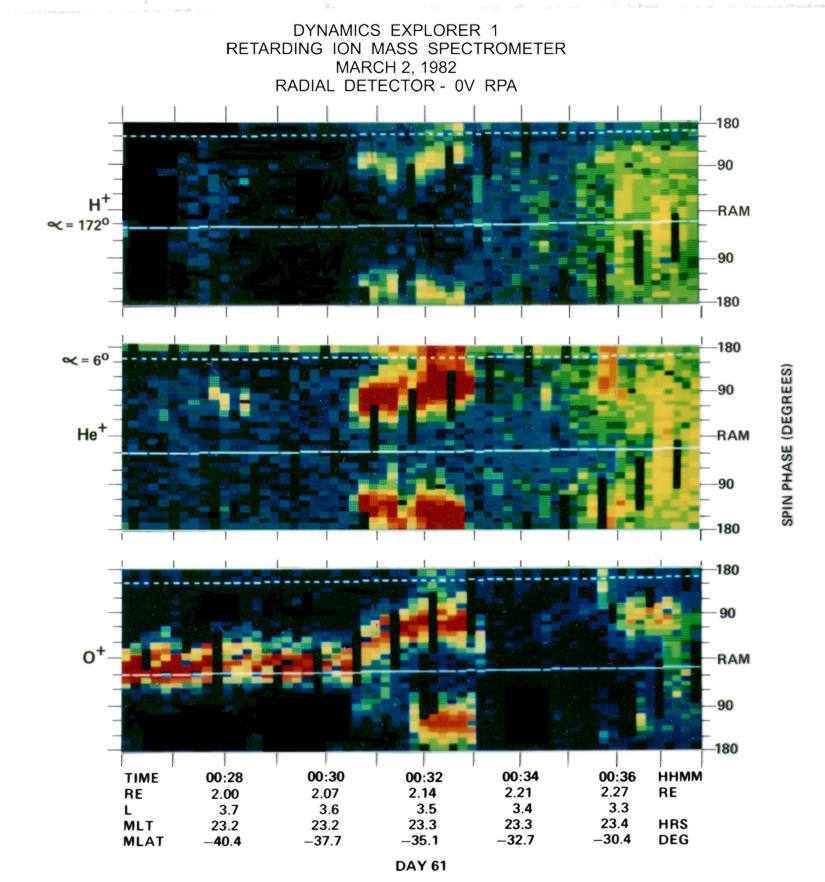 In the 1970's and 1980's, everybody was busy looking for conical ion distributions, notably the auroral studies community.  Lockheed and Aerospace (S3-3, etc) in particular made an industry out of this area.  My one (space physics) 'conference talk' that I claim as a real publication was the COSPAR session where I gave the DE-1 thermal ion mass spectrometry. Conical Ion Distributions At One Earth Radius. (1993)

The figure to the left was not included in the publication - shown here only!

Once upon a time, Alain Roux asked me if I had ever seen any evidence of electron heating parallel to the magnetic field - that ion cyclotron waves ought to do that.  In parallel, I had noticed over the years that just as ATS-6 or SCATHA moved from the outer plasmasphere into the plasmasheet, there was frequently a large flux of low energy (1-100 eV) electrons.   I found one really excellent example on SCATHA, with good support from all the appropriate instruments.   The day 95 event was also fairly extended in time, making it possible to analyze something which normally only occupied a few (16-second) energy scans by the UCSD detectors.  The work was submitted, but one referee (properly I suppose), took real issue with the publication of what amounted to a single event.  A diligent search for a comparable event was done, and the second event analyzed, but the work never was published.  A shame, really, because the interpretation probably was correct, and all my best "art" went into the work, including what was probably the first time anybody plotted plasma data as distribution functions in spectrogram form. Energy Transfer At The Convection Boundary.

I haven't really kept up with the field, but it seems like the magnetosphere people finally decided that the convection derived structure in the ion distribution functions might really be a viable energy source for wave growth.