Spacecraft charging, in general, is where I started, basically continuing the work of my advisor, Elden Whipple.  There is an odd sort of note about the authorship on the first paper.  Carl McIlwain was never much for claiming authorship, unless he felt strongly involved in a project.  He thought his name should come second on this one.

Carolyn Purvis and I did a lot of work after I graduated.  There were supposed to be two papers from that work.  Only the first was published.

Some of the work that Carolyn did is in her 1980 AIAA paper, given here.  I haven't cleaned up the OCR on this one yet. 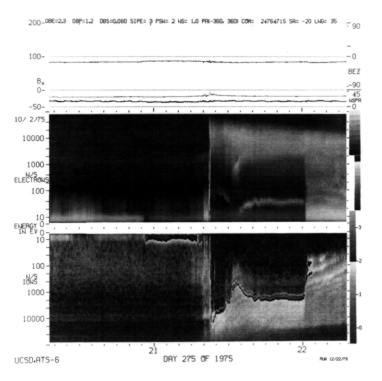 There was a fundamental question that several people worked on, which is where are the critical energy levels which cause satellite charging.  The answer depends on phenomena like secondary emission.  The answer is important because if you are going to build a charging monitor, you need to know what energies to watch for.  My answer was in A Threshold Effect for Spacecraft Charging.   There are some implications for charging theory based on the two crossovers in the secondary emission curve - there are in fact three roots of the charging balance calculation, in principle.  One is stable, one is unstable, and one is metastable.  Shu Lai worked out the theory, and gave an illustration I found unconvincing, so I wrote a comment based on the ISEE-1 data in the Olsen & Whipple article described below.  Comment on Theory and Observation of Triple-Root Jump

The story we (the charging community) put together over time is that in the absence of differential charging on dielectrics, a satellite in the magnetosphere would not charge negatively in sunlight.  So, when ISEE 1 exhibited negative charging behavior, this was quite a challenge to the status quo.  My advisor, Elden Whipple, and I worked on this event.  An Unusual Charging Event on ISEE 1.   We worked really hard to find some way that space charge effects could produce the observed barrier phenomena, and hence allow for charging to occur, but could not.  It was left as a hypothesis that deep dielectric charging of some sort might be the cause. I invested a couple of student thesis efforts in the pursuit of electron charging by ~ MeV electrons

Much, much later, the solution was found, sort of.  It turns out that the fiberglass "belly-band" on ISEE was painted with Goddard White, a supposedly conducting white paint.  Apparently, it is conducting till you put it in vacuum.  Then the water evaporates (outgases), and you are left with an insulating surface, just like ATS-5.  So, it was not the solar arrays.  This paper has got to be one of the few with LEPEDEA data, but without Lou Frank as a co-author.

A paper that received little notice, but is of increasing relevance for surface contamination on optical systems, Spacecraft Generated Ions.  The student who worked on this, Chris Norwood, went off to medical school eventually, I believe.  He and Dean Gant should both be doctors by now.

The hidden ion papers are discussed in the page Ion Flows & Low Energy Plasmas, but just for reference, include one of my favorite ATS-6/SCATHA papers: The Hidden Ion Population Of The Magnetosphere.  A unique bit of work not published in the refereed literature is a comparison between GEOS-2 and SCATHA.  Gordon Wrenn had the ability to bias his sensor wrt the spacecraft that enable him to see the 'hidden' ions.  This paper from the ESA spacecraft charging conference compares some nearly coincident events. Comparison Of Thermal Plasma Observations On SCATHA And GEOS.

Tom Aggson and I did a lot of work together, or at least I got a lot of help from him.  We worked on the quasi-static (DC) data from the floating double probes on SCATHA, and the filter data that did such a great job defining the equatorial noise work.