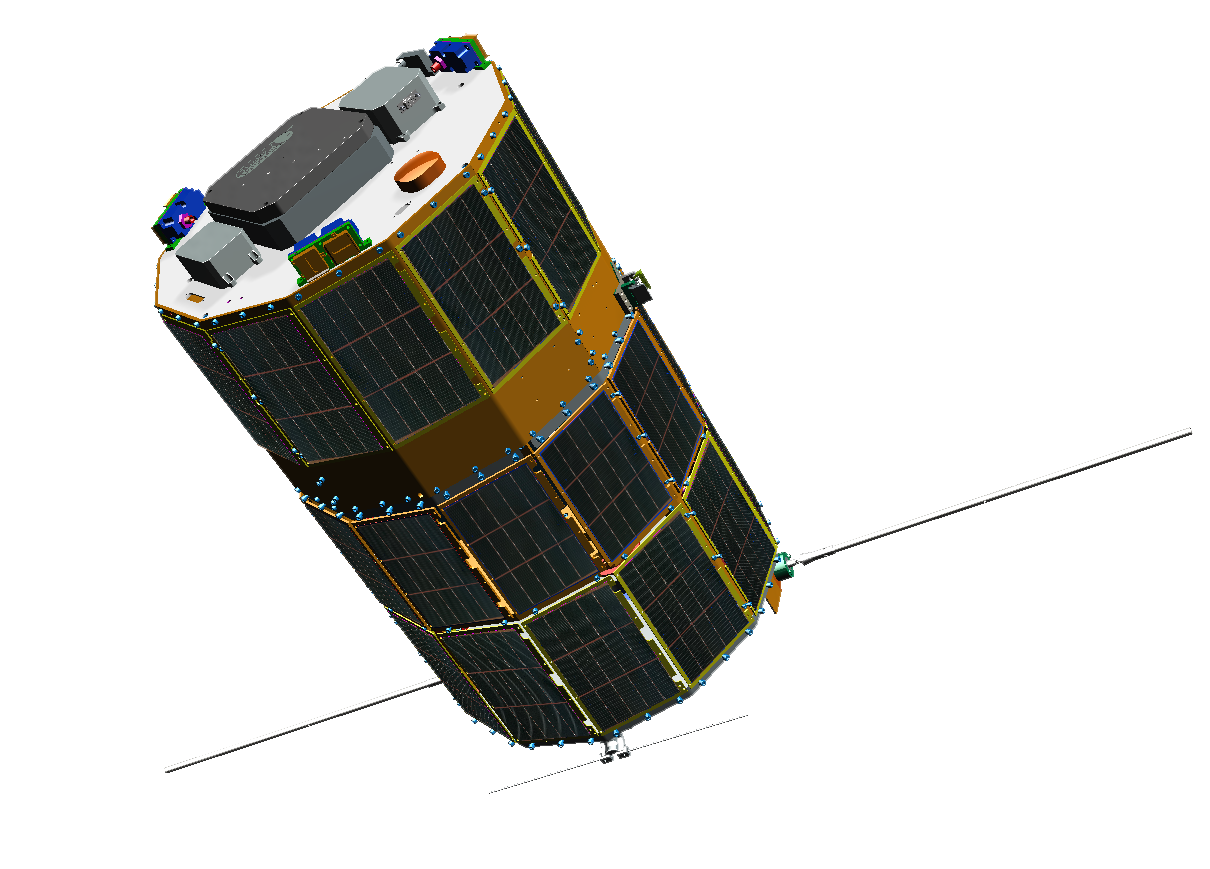 The NPSAT1 mission is a small satellite project manifested for launch aboard a Falcon Heavy launch vehicle as part of the Department of Defense (DOD) Space Test Program’s STP-2 mission.  The small, 86 kg (190 lbs), satellite will carry a number of space flight experiments to investigate space weather and the flight demonstration of space technology.  The experiments on-board include the following.

Two experiments are provided by the Naval Research Laboratory (NRL) to measure electron cloud densities in the ionosphere through radio wave propagation from the spacecraft to the earth;  as well as in-situ measurements of ions near the spacecraft.

Spacecraft technology will be flown to demonstrate configurable, fault-tolerant computer technology that can survive and operate in the harsh radiation environment of space.  Computing architectures will be tested to investigate means of correcting errors caused by radiation.  Modifications can be uploaded from the ground to test different configurations of fault tolerance.

Experimental solar cells will be flown along with a solar cell measurement system that will measure the performance of solar cells throughout the 18-month mission life, recording voltage, current, temperatures and solar incidence angles.
Commercial, off-the-shelf (COTS) technology experiments will demonstrate the suitability of commercial sensors and electronics for low-cost solutions to spacecraft technology demands.  Commercial technology such as memory devices, rate sensors and a low-cost digital camera will be flown and operated in space.

Once in orbit, the NPSAT1 spacecraft will provide a platform for experimentation for NPS Space Systems students as a space-based laboratory.  The spacecraft will continue to support graduate education and research, adding to the more than forty Master of Science graduates who have been involved with the project.

NPSAT1 will perform an uncontrolled atmospheric reentry at the end of its mission life.  An autonomous de-orbit module with its own timer will initiate a drag device to bring the spacecraft down to earth.  Analysis has shown that the spacecraft will break up upon reentry, and any debris that might survive would present a negligible risk upon impact.

The Naval Postgraduate School's NPSAT-1 small satellite was launched aboard a SpaceX Falcon Heavy launch vehicle out of the Kennedy Space Center's Launch Complex 39A (LC-39A) June 25th at 2:30 AM (EDT), integrated and flown by the Department of Defense (DoD) Space Test Program as part of the STP-2 mission. An hour and 22 minutes later, the NPSAT-1 space vehicle was deployed into a circular, 720 km altitude orbit at 24 deg inclination (the angle between the orbit plane and the earth's equatorial plane).  Ground operators at the Naval Postgraduate School (NPS) in Monterey, California were able to command the spacecraft for initial telemetry downloads and were able to verify that the spacecraft was transmitting.  Although, the signal could be detected, the signal strength was too week for data to be decoded.  A successful packet of data was demodulated by spacecraft operators at NPS on June 27th at 8:40 PM (PDT).

Integration of the NPSAT-1 spacecraft onto the STP-2 payload stack began May 27th, 2019 at the Cape Canaveral Air Force Station (CCAFS) with final remove-before-flight (RBF) activities occurring on June 13th, 2019. NPSAT1 Behind Ron and Dan