Occupation of Population: Agriculture, Labor, Animals, and some Trade.

Topographical Features: The Northeastern districts contain the foothills of the Hindu Kush and some large forested areas, while the Southwest is rockier and flatter towards the Daria Panshjir.

Kapisa Province is located in eastern Afghanistan, on the Afghanistan - Pakistan border. Kapisa is bordered by Panjshir in the north, Laghman in the east, Kabul in the south, and Parwan in the west. The Northeastern districts contain the foothills of the Hindu Kush and some large forested areas while the Southwest is rockier and flatter towards the Daria Panshjir.

The population of approximatley 365,000 are primarily Tajik, Pashtun, and Nuristani. Over 1100 provincial aid projects are planned in the area with over US$ 17 million in planned costs.

Kapisa's governor is Syed Mohammad Khalid Hashimi. Upon coming into office in June 2015, Hashimi identified eliminating graft and drugs, and instilling rule of law as his top three priorities.

Taliban Shadow Governor: Mawlawi Asef wields significant influence in the province. Local residents have reported that per Asef's instruction, Afghan National Security Forces are only permitted outside their camp at certain times and occaisons.9 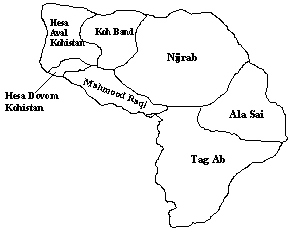 Occupy same areas, generally, as the Ghilzai Pashtun.  Tajiks are the second largest ethnic group in Afghanistan, after the Pashtuns and comprise between 25-30% of the population.  The Tajiks in Afghanistan tend to live in settled communities as opposed to a nomadic lifestyle.  They are of Iranian descent and primarily speak Dari.  The majority of Tajiks are Sunni Muslims.  Tajiks made up the majority of the Northern Alliance, both in terms of membership and leadership.  Tribal ties have largely broken down among the Tajiks; therefore, social organization is defined primarily by geography.  Despite their lack of cohesiveness the Tajiks are often brought together due to the perceived common threat posed by the Pashtuns. They mainly inhabit the Hesa Aval Kohistan, Hesa Dovom Kohistan, and Mahmood Raqi (Mahmud-e-Eraqi) districts. View the Tajik Tribal Tree

The largest single tribe of the Pashtun ethnicity, the Ghalji or Ghilzai, and in particular the Hotaki clan, formed the backbone of the Taliban movement. Long resentful of the power the Duranni tribe (of which Karzai and Zahir Shah are members), the Ghilzai are fiercely independent and often view themselves, as the largest grouping of Pashtuns in the country, as the rightful leaders of Afghanistan. That being said, they suffered much during the Soviet invasion, and must be included in any effort to secure and develop Ghazni Province. There are a multitude of sub-tribes and clans within the Ghilzai confederation. They mainly inhabit Tagab District. View the Ghilzai Tribal Tree

Primarily located in the Koh Band and Nijrab districts, their territory abuts that of every other ethnicity in Kapisa. Sometimes seen as a less-controversial compromise ethnicity that some of the others in Kapisa, half of the Wolesi Jirga members are Safi. Traditionally, the Safis historically have been one of the most independent tribes in Afghanistan, with a major uprising against the central government in 1945-1946.  The tribe is divided into three clans, the Gorbuz, the Massoud and the Wadir.  The three clans were divided politically during the communist era.  In large part the Wadir Safis were aligned with the communists and served in the government.  Many Safis mujahedin leaders came from the Gorbuz clan.  The Massoud clan, however, was split between both sides.6

Located primarily in Ala Sai and Nijrab districts, alongside Nuristani tribes.  There is very little useful data on the Pashai, outside of some intense research on their language.  They inhabit Nuristan, parts of Laghman, and northern Nangarhar, seemingly between the Pashtun and Nuristanis.  Many consider themselves Pashtun.  They speak a Dardic language referred to as Pashai.  Often they are associated with or referred to as Kohistani.

The Nuristani in Afghanistan primarily live in high elevations in northeast Afghanistan. In Kapisa, they primarily live in Ala Sai and Nijrab districts, alongside Pashai tribes, their linguistic cousins. Across the border in Pakistan they similarly live next to the Kohistani (as the Pashai are referred to in Pakistan). For centuries the Nuristanis were known as “kafirs,” or infidels (this is still a pejorative term for them). This has changed as most converted to Islam at the end of the 19th century and the beginning of the 20th. There are fifteen Nuristani tribes with numerous sub-groups. Five languages and numerous dialects are spoken by the Nuristani. They do not have overly positive relations with other Afghans or Pakistanis and a strong animosity toward Arabs. Two of the largest tribes, the Kamozi (or Kam) and the Kushtaz, have had a series of conflicts since the fall of the Taliban. Additionally, for over two decades foreign-funded Wahhabi preachers have been working to convert the tribes to their more hard-line interpretation of Islam. Nuristanis, however, remain protective of their distinctive culture. The tribes speak Dardic languages, often mutually unintelligible. Due to what many Nuristanis claim is Greek blood left over from the mighty armies of Alexander, many Nuristanis have distinctly European features, blue and green eyes, and blond or red hair. View the Nuristani Tribal Tree

One of the most important parties of the Meshrano Jirga, Hamnazar (Alliance), It mainly consists of pro-Karzai MPs, who are Western sympathizers. The group numbers some thirty parliamentarians and is led by Amin Zai. A doctor by profession, he is closely allied with Karzai who strongly supported him for this position.7

Mujahideen party active since the Soviet invasion; led by Gulbuddin Hekmatyar.  HiG was famous for its shifting loyalties, and was the favorite party of Pakistan’s ISI until the rise of the Taliban. Former members continue to wield considerable influence in the province. Actively opposed to US-led and Afghan national forces.  Hekmatyar is a Kharoti Ghilzai and, therefore, less influential than the much more respected and powerful Khugianis, such as Haji Din Mohammad and Anwarul Haq Mohammad.8

Led by Pir Ishaq Gailani.  Party promotes national unity, security and a national development plan.  Tied to the Maraboutic Sufi order; has considerable influence over the Khugiyani tribesmen. Has a reputation for moderate thought and the traditional mystical and introspective religious currents that characterize Sufism in that sect.