Transportation: Khost-Gardez highway (in poor condition), 4 provincial roads radiate out from Khost City into the surrounding districts, and there are also a number of secondary roads and cart tracks.4

Rivers and Bodies of Water: A number of streams.

Topographical Features: The province is dominated by the Khost Valley and the mountains that surround it. There are a number of streams throughout the province. Khost Valley and Bak areas sustain rain fed and intensively irrigated crops. Natural forests run along the border with Pakistan and Paktia. A large area of rangelands runs from Gorbuz district in the south to Jaji Maydan district in the north.6

Khost Province is located in eastern Afghanistan, on the Afghanistan - Pakistan border. The province is dominated by the Khost Valley and the mountains that surround it. Rangelands run from Gorbuz district in the south to Jaji Maydan district in the north. Khost Valley and Bak areas sustain rain fed and intensively irrigated crops. Natural forests run along the border with Pakistan and Paktia.

The population of approximately 487,000 are primarily Pashtun, with 1% Tajik and other various minorities. Governor Arsala Jumal was appointed governor in August 2006; he previously served as Chief Program Coordinator for Water and Sanitation at the Ministry of Rural Reconstruction and Development.  There are over 1200 provincial aid projects in Khost with a planned cost of US$ 17 million.

Governor Arsala was appointed in 2006, he previously served as Chief Program Coordinator for Water and Sanitation at the Ministry of Rural Reconstruction and Development.

In 2008, Arsala Jamal was replaced by Hamidullah Qalandarzai, an ethnic Pashtun.

Currently Hukum Khan Habibi (ethnic pashtun) serves as the Provincial Governor. Habibi was born in Logar province and is thought to have attended school in India. Since 2013, Habibi worked as deputy prime minister of economy until being appointed to the governorship by President Ashraf Ghani in June 2015.

Taliban Shadow Governor: Unknown - Though the current shadow governor in Khost is unknown, sources indicate that the person has considerable Haqqani network ties due to Khost's proximity to Haqqani strongholds throughout Pakistan's FATA region. 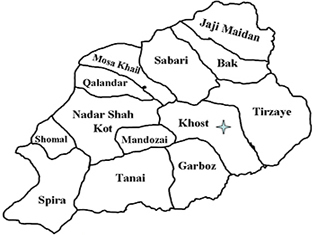 Various factions of the Khostwal tribe are dominant in the Tanai, Musa Khel, Mandozai, Tirzaye, Sabari and Bak districts.  Historically, the Khostwal tribal groups have combined with the Wazirs against their traditional enemies the Turi.  The Khostwal consider themselves Pashtun.7

Pashtun tribe, primarily located in Pakistan.  The Waziris in Khost live in the Garboz, Qalandar, and Nadar Shah Kot districts.

Pashtun tribe which resides in the Spira district with the Suleimankhel and in the Nadar Shah Kot and Qalandar districts with the Waziris. Pacha Khan Zadran, is a one of the most famous of the Zadran tribe, who controls the area near the Khost road. Jalaluddin Haqqani, another ACM leader (the Haqqani Network), is another influential member of the Zadran tribe. The Zadran also live in Paktika province.9

Originally a mujahideen group which broke away from Hekmatyar’s Hezb-e Islami under the leadership of Yunus Khalis. HiK was dominant in Nangarhar. Khalis died in 2005 or 2006, resulting in an internal power struggle for control of the party between Khalis’ son Anwarul Haq Mujahid and Haji Din Mohammad.  It appears that Mohammad was successful in consolidating his control over much of the party.  Recent and active political players in Nangarhar have connections to HiK.  Led by Haji Din Mohammad, current governor of Kabul.

1 The exact number of districts in Khost is unclear. Some credible maps indicated that existing districts have split into other districts.