Transportation: Primary highway from Jalalabad through Asadabadto Pakistan and Nuristan border. Majority of the highway is motorway, with portions in poor condition.2

Topographical Features: Dominated by the Kunar Valley bounded on the east and southeast by Kabul Tsappar range and on the northeast by the Kashmund range. The Korengal Valley to the west of the provincial capital, Asadabad, has been a key inflirtration/exfiltration route used by insurgents transiting through Kunar to and from the Nuristan border with Pakistan through the Nuristan districts of Kamdesh and Berg-e Matal. Primary sources of the Kunar River is a glacier on the south side of the Hindu Kush.3 River Valleys are irrigated for farming, with some rangeland in between. The vast majority of mountains ranges are covered in natural forest. Kunar has a 175 km border with Pakistan along the south and southeast.

Kunar Province is located in eastern Afghanistan, on the Afghanistan - Pakistan border. The population of approximately 380,000 is primarily Pashtun, with 5% Nuristani and other minorities. Owing to its unique geographical location, Kunar province is very important from the geo-political point of view. It has 175 kilometers long border with Pakistan at the south and southeast. The Kunar Valley is surrounded by Kabul Tsappar range on the east and southeast and the Kashmund range on the northeast. The Korengal Valley, to the west of the provincial capital Asadabad, lies a key infiltration/exfiltration route used by insurgents transitioning through Kunar. On the south side of the Hindu Kush on the Kunar River lies a glacier.

Governor Wahidullah Kalimzai, son of famous Afghan elder Mupatesh Kalimullah Shanezwal, took office in May 2015. He was born in Maidan Wardak in 1968 and was a commander in the struggle against the Soviet Union from 1988 to 1992. Kalimzai has an intelligence and law enforcement background, having worked as an intelligence officer in Kabul from 2004-2007. Prior to assuming the governorship, Kalimzai was the head of the Wardag province Tribal Shura and provincial director of the National Islamic Front in Wardag. He is fluent in Pasho, Dari, Arabic, and English.9

Taliban Shadow Governor: Unknown - The previous shadow governor (Kunar Omar Zadran) was killed in an airstrike in June 2015. His replacement is not currently known. 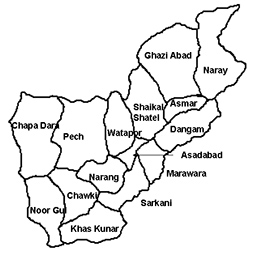 Located primarily in Chaparhar, Dih Bala, Achin, Shinwar, Nazyan, and Dur Baba districts.  History of opposing the British and the central government in Kabul.  A major thorn in the side of Amir Abdur Rahman Khan during the 1880s.  They are classified as Eastern, Sarbani Pashtuns.  Adamec suggests they were forcibly settled in valley above Narang by Abdur Rahman.4 View the Shinwari Tribal Tree

Kunar Safays are the largest and most powerful of the province’s Pashtun tribes and live primarily in the Pech Valley region.  The Safays historically have been one of the most dissident tribes in Afghanistan, with a major uprising against the central government in 1945-1946.  The tribe is divided into three clans, the Gorbuz, the Massoud and the Wadir.  The three clans were divided politically during the communist era.  In large part the Wadir Safays were aligned with the communists and served in the government.  Many Safay mujahideen leaders came from the Gorbuz clan.  The Massoud clan, however, was split between both sides.5

Nuristanis comprise a minority in parts of Kunar.  The Kom group of Nuristanis extend down into the Kunar Valley.7 View the Nuristani Tribal Tree

Originally a mujahideen group which was split with Hekmatyar’s Hezb-e Islami under the leadership of Yunus Khalis.  HiK was dominant in Nangarhar. Khalis died in 2005 or 2006, resulting in an internal power struggle for control of the party between Khalis’ son Anwarul Haq Mujahid and Haji Din Mohammad.  It appears that Mohammad was successful in consolidating his control over much of the party.  Recent and active political players in Nangarhar have connections to HiK.  Led by Haji Din Mohammad, current governor of Kabul.

Mujahideen party active since the Soviet invasion; led by Gulbuddin Hekmatyar.  Actively opposed to US-led and Afghan national forces.  Politically active in Sherzad, Surk Rod and Pachir Wa districts.  Hekmatyar is a Kharoti Ghilzai and, therefore, less influential than the much more respected and powerful Khugianis, such as Haji Din Mohammad and Anwarul Haq Mohammad.8

1 Actual number of districts is unclear, due to differences of opinion at the local, provincial, and national levels.