Availibility of Electricity: 33% of population has access; Little access to electricity outside of Gardez City, most electricity is private.

Rivers/Bodies of Water: Shamal. There are no large rivers as such in Paktya.

Paktya Province is located in eastern Afghanistan, on the Afghanistan - Pakistan border. The population of approximately 400,000 consists of 91% Pashtun and 9% Tajik; they live primarily in rural areas. There are over 1100 provincial aid projects at a cost of over US$ 12 million.

President Ashraf Ghani appointed Nasratullah (Arsala) as Governor in May 2015, succeeding Juma Khan Hamdard, who had served in the position for nearly eight years. Nasratullah, an ethnic Pashtun, was a political campaigner for President Ghani. He is a cousin of militia Commander Haji Zahir. Nasratullah vowed to "sack unfit officials" upon taking office and focused on nepotism in the police corps. The current Governor is Zalmai Weesa. 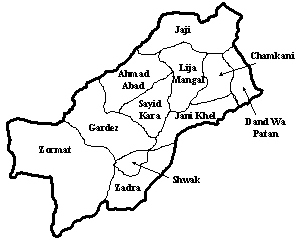 The Tajiks generally occupy the same areas as the Ghilzai Pashtun.  Tajiks are the second largest ethnic group in Afghanistan, after the Pashtuns and comprise between 25-30% of the population. The Tajiks in Afghanistan tend to live in settled communities as opposed to a nomadic lifestyle. They are of Iranian descent and primarily speak Dari. The majority of Tajiks are Sunni Muslims. Tajiks made up the majority of the Northern Alliance, both in terms of membership and leadership. Tribal ties have largely broken down among the Tajiks; therefore, social organization is defined primarily by geography. Despite their lack of cohesiveness the Tajiks are often brought together due to the perceived common threat posed by the Pashtuns.3 View the Tajik Tribal Tree

Not to be confused with Waziri Ahmadzais, these Ahmadzai are Ghilzais, a subset of the massive Sulieman Khel. Traditionally they controlled the Altimur Pass leading into Zormat, and ranged from Logar to Jalalabad.4 Traditionally a large portion of the tribe was Kuchi and nomadic. As such, they were often regarded as martial in nature. They are greatest in number in Paktia, Paktika, and Khost.5 View the Ahmadzai Tribal Tree

These Ghilzai Pashtuns form the majority of the population in Zormat District, and a large percentage of Gardez. In times past, the Suleimankhel provided large numbers of recruits for the Taliban.  As a result, the level of Anti-Coalition Militia activities remain high in areas dominated by Suleimankhel. The bias of some sub-tribes toward the Taliban in part may be explained by their proximity to the Pakistan border and the influx of insurgents and the radical politics.6 View the Suleimankhel Tribal Tree

Cousins of the Zadrans and Mangals, they now reside in Sayid Karam District in Paktia. They can be further divided into five clans: Musa Khel, Sultak, Ahmad Khel, Hasan Khel, and the Bobaki. Little else is known.7

Primarily found in Khost, the Khostwals occupy a small portion of the Jani Khel District along the Pakistani border. Known as fierce fighters, they had traditionally been at odds with the Waziri tribes to the south, except when they united to raid the Turi (traditionally Shi’ites) to the north. They have traditionally divided themselves into Tor Gundi and Spin Gundi factions.8 View the Khostwal Tribal Tree

Related to the Turis but Sunni in faith, the Jaji can be found primarily in Jaji District. They are a set of Khogyanis from the Karlanri supertribe of Pashtuns. They are divided into eight wands: Lehwani, Ada Khel, Petla (combined with the Allisemgeh), Husain Khel, Karaia Ahmad Khel, Ahmad Khel (combined with the Bayan Khel), Ali Khel, and the Jamu Khel. Hill men, they are famous for their dances and their war-cries.9 In more recent times, they have supported the likes of Abdul Sayyaf. The director of the BBC Pashtu service is a Jaji.

A Karlanri clan that can be further divided into Miran Khel, Khajuri, Gabar, Marghai, and Kamal Khel subdivisions. They are known for their independent nature and have a history of resisting British forces, central and provincial governments, Soviet forces, and Taliban forces. The latter has left them with a healthy memory of the Taliban and left a strong animosity between the two. They primarily reside in Lija Mangal, Chamkani, and Dand Wa Patan districts. In Chamkani in particular they have had significant conflict with the Taliban. View the Mangal Tribal Tree

Pashtun tribe which resides in the Zadran, Shwak, and Zurmat districts of Paktia.  Pacha Khan Zadran is a one of the most famous of the Zadran tribe, who controls the area near the Khost road.  He was appointed governor of Paktia in 2001, but never assumed the post after other tribes blocked his progress to Gardez. Jalaluddin Haqqani, another ACM leader (the Haqqani Network), is another influential member of the Zadran tribe. The Zadran also live in Khost and Paktika provinces.10

The Kharoti clan are within the Karlanri tribe of Pashtuns.  Generally, they do not cooperate with Anti-Coalition Militia (ACM) or participate in their activities.  Their political stance and support for the government is in part, at least, due to their rivalry with the Suleimankhel and the Waziris.  Notable members of the Kharoti clan include Gulbuddin Hekmatyar and Harakat, both of Hezb-e Islami Gulbuddin (HIG). Overall, however, the Kharoti are not supportive of HIG.  Former provincial governor of Paktika, Ghulab Mangal, considered the Kharoti among the most reliable of Ghilzai tribal groups.11

The largest single tribe of the Pashtun ethnicity, the Ghilzai or Ghalji formed the backbone of the Taliban movement. Long resentful of the power the Duranni tribe (of which Karzai and Zahir Shah are members), the Ghilzai are fiercely independent and often view themselves, as the largest grouping of Pashtuns in the country, as the rightful leaders of Afghanistan. View the Ghilzai Tribal Tree

A Ghilzai sub-tribe, the Andar had been known for their skill and usage of large karez. More concentrated in Ghazni Province, they have also a significant presence in Zormat district. During the 19th century they joined in the Ghilzai revolt and many were summarily sent into internal exile. Somewhat inexplicably, they allied themselves for a time with the Harakat-i Islami, originally a Shi’ite faction, during the anti-Soviet campaign.12

The Utmanzais represent the smaller, northern branch of the Waziri tribe, the larger faction being the Ahmadzai Waziris. Primarily located within the Pakistani Tribal Agency of North Waziristan across the Durand Line, the Utmanzai are known for their independent spirit, proficiency at smuggling, and the difficulty of their native terrain. Falling under the great Karlanri supertribe, they are hill people.

Originally a mujahideen group which split with Hekmatyar’s Hezb-e Islami under the leadership of Yunus Khalis.  HiK was dominant in Nangarhar. Khalis died in 2005 or 2006, resulting in an internal power struggle for control of the party between Khalis’ son Anwarul Haq Mujahid and Haji Din Mohammad.  It appears that Mohammad was successful in consolidating his control over much of the party.  Led by Haji Din Mohammad, current governor of Kabul.

The party of former Mujahid and prime minister Gulbuddin Hekmatyar, HiG was famous for its shifting loyalties, and was the favorite party of Pakistan’s ISI until the rise of the Taliban. Former members continue to wield considerable influence in the province. Faizanullah Faizan was an HiG commander during the civil war.

This party is under the guidance of Abdul Rasool Sayyaf, and has been since the anti-Soviet campaign. Despite ideological and cultural similarities with the Taliban, Sayyaf did not join them (for personal reasons) and went with the Northern Alliance. He follows strict Wahhabi interpretations of Islam, and is not known for tolerance. In the past this party has been known for its foreign supporters and followers; the former often Arab, the latter from places as diverse as the Southern Philippines, Chechnya, and Bosnia. In February 1993 government forces and members of the Ittihad-e Islami massacred over 700 Hazara in the Afshar district of West Kabul.

Primarily (but not exclusively) a Pashtun party, followers of the Sufi holy man Pir Gailani have a reputation for moderate thought and the traditional mystical and introspective religious currents that characterize Sufism in that sect.

One of the most important parties of the Meshrano Jirga, Hamnazar (Alliance), It mainly consists of pro-Karzai MPs, who are Western sympathizers. The group numbers some thirty parliamentarians and is led by Amin Zai. A doctor by profession, he is closely allied with Karzai who strongly supported him for this position.13