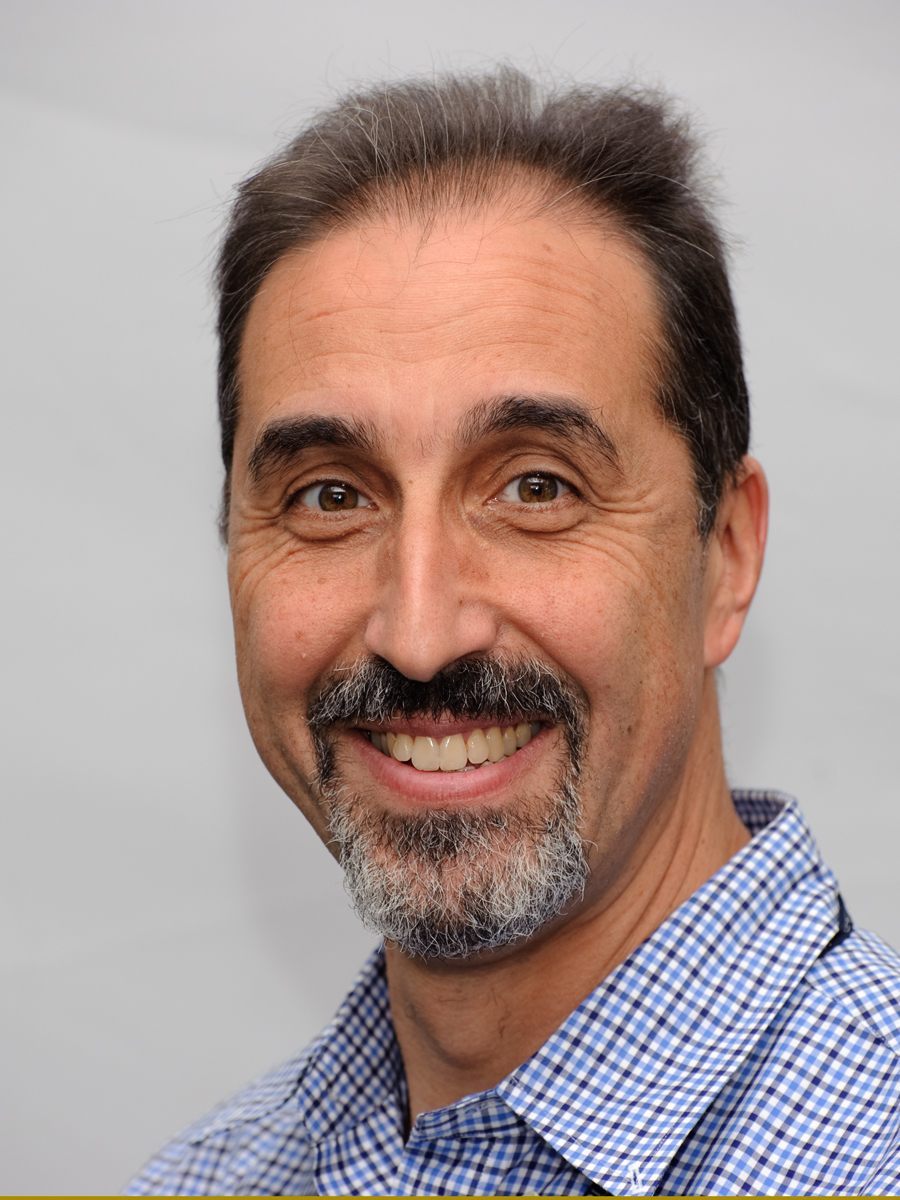 Prof. Narducci graduated with top honors in both physics and math from Drexel University in Philadelphia, Pa in 1989.  He then went to the University of Rochester to earn a Masters of Arts in 1991 and a Ph.D. in 1996. The late Prof. Leonard Mandel supervised his Ph.D. dissertation, entitled Photon correlations in single and multi-atoms systems.

Upon completion of his degree, he joined the Naval Air Systems Command as a staff physicist establishing his own research team to investigate effects in various atomic systems, including cold atom and warm cells. He served as a program manager for the Office of Naval Research from 2000-2003. He was elected a NavAir Associate Fellow in 2006 and a full NavAir Fellow in 2012. He won the Dolores Etter Award for Top Navy Scientist (Individual) in 2013 and become the Senior Science and Technology Manager: Position, Navigation and TimeKeeping. He joined the faculty of the Naval Postgraduate School in July 2017. He continues his research while teaching.

Also, "on the side", he has served as Associate Editor for Physical Review A (currently the longest serving editor) and Associate Editor for Physical Review Letters. He has also  guest edited a special issue of the Journal of Modern Optics for the last 10 or so years devoted to the Proceedings of the  Conference of The Physics of Quantum Electronics. 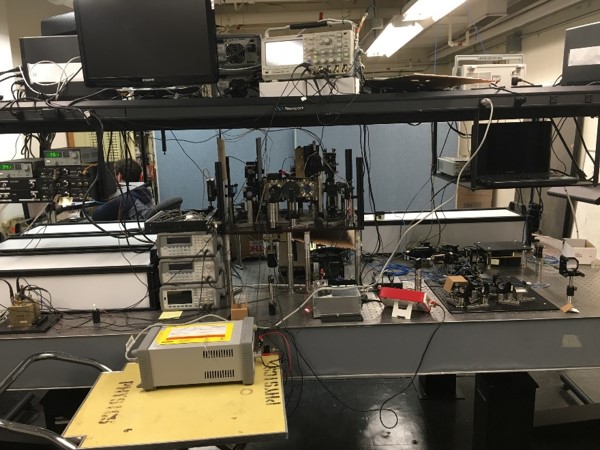 Long-time navigation in the absence of a signal from the Global Positioning System (GPS) is challenging. Many current Naval and DOD systems rely on GPS-like accuracy for position information. In GPS-denied or GPS-compromised environments, platforms need to rely on other sources for position information (e.g. celestial navigation, local signals, magnetic and gravitational maps, etc).  One such method is to use on-board inertial navigation sensors (accelerometers and gyroscopes) to simply keep track of a platforms 3 degrees of acceleration and 3 degrees of rotation rate and then integrate acceleration twice and rotation rate once to get position. However, these sensors are subject to drift and bias errors, resulting in cumulative errors upon integration.

Atom interferometers are quantum sensors that exploit wave-like properties of atoms for precision measurements. We first laser-cool atoms in what is called a 2-dimensional magneto-optical trap, which cools atoms in 2 dimensions, leaving the particles free to move in the third dimension. The particles enter the interferometry region, where they are subject to pulses of light which act like atomic beam splitters and mirrors, causes the matter waves to split and separate, change direction, and finally recombine. The physics is very reminiscent of an optical Mach-Zehnder interferometer (depicted below). When configured to measure rotation, the physics of this device -based on the Sagnac effect- is very similar to the physics of an optical gyroscope. 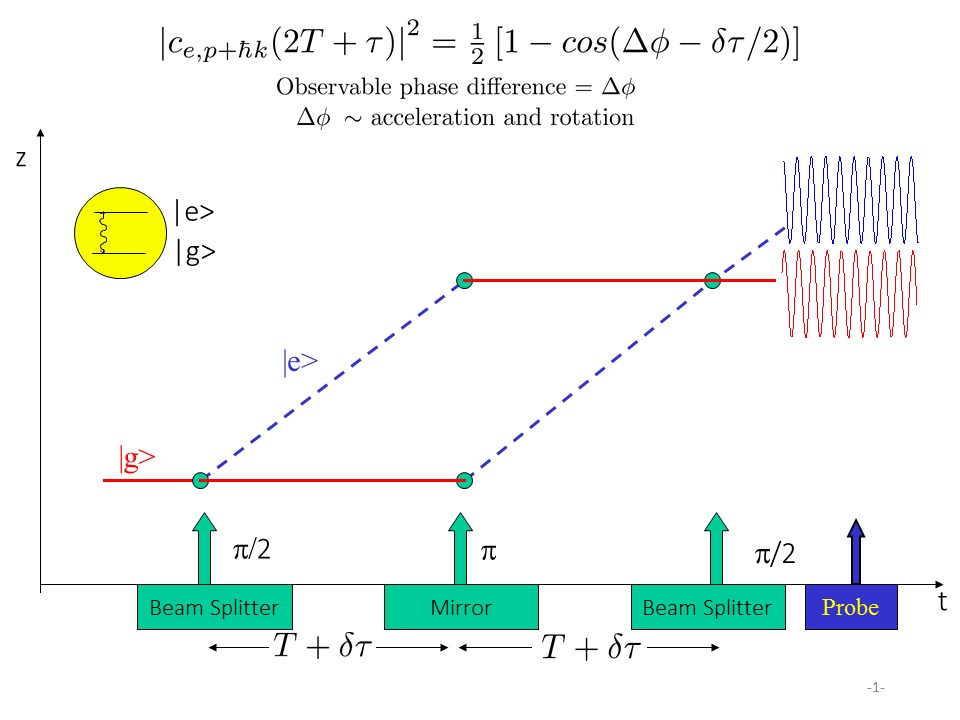 When configured to measure acceleration, the phase shift in the interferometer is given by ?? =  keff g T2 where k is the laser wave vector, a is the acceleration and T is the time between laser pulses. When configured to measure rotation, the phase shift is given  by (equation here), where O is the rotation rate, A is the enclosed area, m is the mass of the atom and hbar is the reduced Planck’s constant. The trouble occurs when you place the interferometer on a platform and witness a rotation. Was it caused by acceleration or rotation (or both)? How can you tell? With one atom interferometer, you cannot tell the difference, but with two you can. Notice that the area in the above equation is a vector. It changes sign when the direction of the atomic beam changes sign, changing the sign of the phase shift caused by rotation. The sign of the phase shift caused by acceleration does not change.

Depicted below is the gyroscope being tested on a rotation platform.

We are developing an interferometer who sensitivity scales as T3. It has the advantage of the faster scaling, as described above, but it has the drawback that, as currently designed, it uses magnetically sensitive transitions as compared to the usually used magnetically insensitive transitions. We are now challenged with having to control the magnetic field noise to a very high degree over a large region of space.

The experiments consist of laser cooling rubidium atoms to a temperature of approximately 100 mK or less, then “tossing” them up a vacuum chamber. Pulses of light are applied to make an interferometer and the resulting states of the atom is read out. Depicted below is a movie showing the tossing of the atoms and collecting of the interferometer data.

Dissertation: Construction and Characterization of a Dual Atomic Beam Accelerometer/Gyroscope

Many many research opportunities exist! Come talk to me.