NPS has supported the U.S. military undergraduate service academies through a broad range of internship opportunities over the past several years. High-performing service academy students work very closely with NPS faculty and researchers on a variety of projects. Areas of concentration for the summer programs span several NPS departments and academic groups, from cyber infrastructure and autonomous systems to aerospace engineering and space systems.

Service Academy interns are typically placed by academic discipline, with faculty at both NPS and the academy collaborating on specific programs of study, sponsorship details and defined responsibilities.

NPS also partners with the U.S. Naval Academy through the following Scholarship Programs:

West Point cadets have also been frequent interns on campus during the summer months.

Air Force Academy cadets are a relatively newer addition to campus over the past few years, but it is a partnership that is developing and growing.

For additional information on any of the current internship initiatives with the five DOD service academies, please contact the NPS Public Affairs Office at pao@nps.edu. 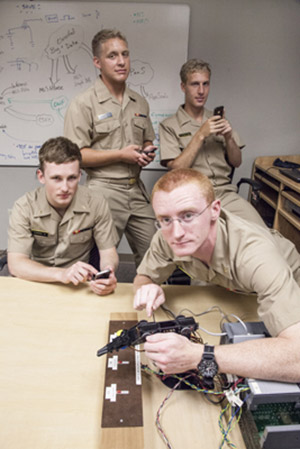 A small cadre of midshipmen from the U.S. Naval Academy in Annapolis are wrapping-up a weeks-long internship with Naval Postgraduate School Cyber Academic Group (CAG) faculty, June 18. Sponsored by the National Reconnaissance Office, the interns traveled to the West Coast during their school’s summer break to get hands-on experience in software engineering, cloud computing and computer-controlled systems.