Topographical Features: The majority of the province is mountainous. Kashmund range in the southeast; Kuhestan range in the north. Intensively cultivated land along river valleys. Forested areas in Alinger, Alishing, and Dawlat Shah districts. Lake in the Qarghayi district.4

Laghman Province is located in eastern Afghanistan, near the Afghanistan - Pakistan border. The province is bordered by Nuristan in the north, Kunar in the east, Nangarhar in the south, and Kabul / Kapisa in the west. The majority of the province is mountainous.  Kashmund range in the southeast; Kuhestan range in the north.  Laghman has intensively cultivated land along river valleys and forested areas in Alingar, Alishing, and Dawlat Shah districts. The population of approximately 375,000 are Pashtun, Tajik, Pashai, Kata, as well as other smaller minority groups. The primary occupations of the residents are agriculture, government, and day labor. Their are over 1100 provincial aid projects on-going at a cost of over $9 million.

Governor Abdul Jabbar Naimi replaced Fazlullah Mujadeddi on June 6 2015 as the governor of Laghman province. Naimi was previously the governor of Khost and Maidan Wardak before being appointed as the Provincial Governor for Lagman. Naimi, an ethnic Pashtun, was born in 1967 but lived in exile in Pakistan for several years. Since the fall of the Taliban government, Naimi returned to Afghanistan and served in the Afghan embassy in Pakistan.7

Taliban Shadow Governor: Maulvi Shaheed Khail, a former Taliban era Minister, was released from Afghan custody in 2008 and was appointed as the shadow governor the same year. He has a reputation for being "fierce but fair" among residents. Qari Muir formerly served as the deputy shadow governor for Laghman and chief of intelligence before he was killed in the village of Qal'eh-ye Jom-eh in Pul-e Alam district, August 2010. The current Taliban shadow governor is unknown. 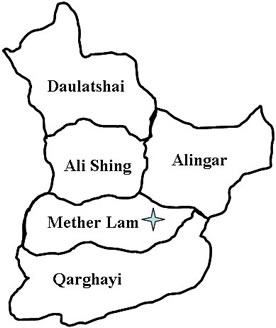 Comprise just over 50% of the population in Laghman.  Concentrated in Alingar, Mehterlam and Qarghayi districts. View the Ghilzai Tribal Tree

Occupy same areas, generally, as the Ghilzai Pashtun.  Tajiks are the second largest ethnic group in Afghanistan, after the Pashtuns and comprise between 25-30% of the population.  The Tajiks in Afghanistan tend to live in settled communities as opposed to a nomadic lifestyle.  They are of Iranian descent and primarily speak Dari.  The majority of Tajiks are Sunni Muslims.  Tajiks made up the majority of the Northern Alliance, both in terms of membership and leadership.  Tribal ties have largely broken down among the Tajiks; therefore, social organization is defined primarily by geography.  Despite their lack of cohesiveness the Tajiks are often brought together due to the perceived common threat posed by the Pashtuns. View the Tajik Tribal Tree

The Nuristani in Afghanistan primarily live in high elevations in northeast Afghanistan.  They trace their genealogy back to either the Greek forces of Alexander the great or to the tribes of Mecca which rejected Islam.  For centuries the Nuristanis were known as “kafirs”, or infidels.  This has changed as most have converted to Islam.  There are fifteen Nuristani tribes with numerous sub-groups.  Five languages and numerous dialects are spoken by the Nuristani.  Do not have overly positive relations with other Afghans or Pakistanis and a strong animosity toward Arabs. View the Nuristani Tribal Tree

Occupy the majority of Daulatshai and Alishing districts.  Also reside in parts of Alingar, Mehterlam and Qarghayi districts.  The Kata are a Nuristani tribe which speaks two dialects of Kamakata viri.

Also a Nuristani tribe, which with the Kata, live in the districts of Daulatshai and Alishing.

Concentrated in northern portion of Daulatshai District.  There is very little useful data on the Pashai, outside of some intense research on their language.  They inhabit Nuristan, parts of Laghman, and northern Nangarhar, seemingly between the Pashtun and Nuristanis.  Many consider themselves Pashtun.  They speak a Dardic language referred to as Pashai.  Often they are associated with or referred to as Kohistani.  The majority of Pashai in Laghman rely on the livestock and timber business.5

Originally a mujahideen group which broke away from Hekmatyar’s Hezb-e Islami under the leadership of Yunus Khalis.  HiK was dominant in Nangarhar. Khalis died in 2005 or 2006, resulting in an internal power struggle for control of the party between Khalis’ son Anwarul Haq Mujahid and Haji Din Mohammad.  It appears that Mohammad was successful in consolidating his control over much of the party.  Recent and active political players in Nangarhar have connections to HiK.  Led by Haji Din Mohammad, current governor of Kabul.

Led by Mohammad Yunus Qanuni.  Part of a political alliance called Jabahai Tafahim Millie or National Understanding Front.  Qanuni was the primary contender against Karzai for the presidency.  He is a Tajik who has been a mujahideen, spokesman for Ahmed Shah Massoud, and Minister of Interior and Education.  He was elected to parliament in 2005 and was chosen to lead the Wolesi Jirga.  Support for him and his party may be a political counter-weight to Karzai.

Mujahideen party active since the Soviet invasion; led by Gulbuddin Hekmatyar.  Actively opposed to US-led and Afghan national forces.  Politically active in Sherzad, Surk Rod and Pachir Wa Gam districts.  Hekmatyar is a Kharoti Ghilzai and, therefore, less influential than the much more respected and powerful Khugiyanis, such as Haji Din Mohammad and Anwarul Haq Mohammad.6