Rivers/Bodies of Water: Helmand, Kabul, Logar, and Maydan Rivers; one dam on the Logar River at Chak and Band Dana reservoir.6

Topographical Features: Wardak is a very mountainous province with the Kott-I Baba Range in the north and the Paghman Range in the east. The majority of the province is used as rangeland with some areas of irrigated and rain fed crops.5

Mayden Wardak Province is located in eastern Afghanistan. It is bordered in the north by Parwan / Bamiyan, in the east by Kabul and Logar, in the south by Ghazni, and the west by Bamyan. Wardak is a very mountainous province with the Kott-I Baba Range in the north and the Paghman Range in the east.  The majority of the province is used as rangeland with some areas of irrigated and rain fed crops.

The population of approximately 500,000 are composed of Hazara, Tajik, Pashtun, Kuchi, Qizilbash and other minority ethnicities. Their primary occupations tend to be agriculture, timber, and day labor. Their are just under 800 provincial aid projects in Mayden Wardak at a cost of over $8 million. 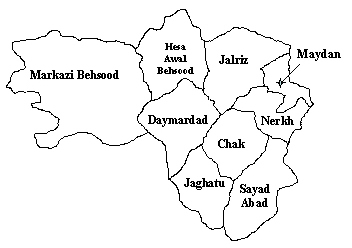 Some leaders of the Wardak Pashtun were notorious for their opposition to the British in 1879-1880.  The Wardak tribe is subdivided in the Mayar, Mirkehl (which may be the same as the Amir Khel), and the Nuri.7 There is some disagreement whether the Wardaks are Karlanri or Ghilzai Pashtun.  Most evidence suggests they are Karlanri.  The various Wardak sub-tribes live in each of the province’s districts except for Hesa Awal Behsood and Markazi Behsood.  Currently several Wardak Pashtuns hold important posts in the central government, including the Ministry of Defense (General Abdur Rahim Wardak), the Ministry of Information, Culture and Youth (Abdul Karim Khoram), and the Ministry of Parliamentary Affairs.

The largest single tribe of the Pashtun ethnicity, the Ghalji or Ghilzai, and in particular the Hotaki clan, formed the backbone of the Taliban movement. The Ghilzai are fiercely independent and often view themselves, as the largest grouping of Pashtuns in the country and the rightful leaders of Afghanistan. View the Ghilzai Tribal Tree

In Wardak, the Qizilbash primarily reside in Hesa Awal Behsood and Day Mirdad districts.  The Qizilbash are an Imami Shia group thought to be descended from Persian “mercenaries and administrators left behind by the Safavid Emperor Nadir Shah Afshar to govern the Afghan provinces."8 After the demise of the Safavid Empire in Afghanistan, the Qizilbash, due to their higher levels of education and experience as administrators, remained influential in the Afghan court and government bureaucracies.  Their Shia faith combined with their disproportionate political influence often resulted in resentment by large portions of the Sunni majority within Afghanistan.9 Also, they were used by the shahs as personal bodyguards and assigned to put down uprisings among the populace, which further alienated them from the Pashtun majority.  Due to the persecution, religious and political, the Qizilbash frequently resorted to the use of taqiyya, the practice of precautionary dissimulation or the adoption of a dual religious identity.  In order to play a role in government and society, the Qizilbash, like other Imami Shia, publicly portrayed themselves as Sunnis or Pashtuns while they privately maintained their Shia faith.10 In present day Afghanistan, the Qizilbash continue to practice taqiyya making it difficult to gain accurate census data.  It appears that they largely reside in urban centers and “tend to be predominantly urban professionals—doctors, teachers, engineers, and lawyers."11

The Tajiks in Wardak live around the capital Maydan and in Hesa Awal Behsood district.  Tajiks are the second largest ethnic group in Afghanistan, after the Pashtuns and comprise between 25-30% of the population.  The Tajiks in Afghanistan tend to live in settled communities as opposed to a nomadic lifestyle.  They are of Iranian descent and primarily speak Dari.  The majority of Tajiks are Sunni Muslims.  Tajiks made up the majority of the Northern Alliance, both in terms of membership and leadership.  Tribal ties have largely broken down among the Tajiks; therefore, social organization is defined primarily by geography. View the Tajik Tribal Tree

The Hazara in Wardak reside primarily in the Markazi Behsood, Jaghatu, Nerkh, and Day Mirdad districts. The Hazara, a distinct ethnic and religious group within the population of Afghanistan, have often been the target of discriminatory and violent repression.  Most likely descended from the Mongols of Genghis Khan, (there is also a strong argument that they are of Eastern Turkic origin), the Hazara are noticeably different in physical appearance when compared to the Pashtun majority.  In terms of religion, the vast majority of the Hazara are of the Shia Muslim faith, again in contrast to the Pashtuns who are Sunni Muslim.  Due to these differences, “the Hazara have experienced discrimination at the hands of the Pashtun-dominated government throughout the history of modern Afghanistan."12 As the traditional underclass of Afghan society, Hazara were exploited and made to work as servants and laborers.  As a result there tends to be an anti-government and anti-Pashtun bias among the Hazara.  In present day Afghanistan, the Hazara are divided geographically into two main groups: the Hazarajat Hazara and those who live outside the Hazarajat.  The Hazarajat is located in the Hindu Kush Mountains in central Afghanistan and is “centered around Bamiyan province and include[s] areas of Ghowr, Uruzgan, Wardak, and Ghazni province."13 The Hazara living outside of the Hazarajat live in and around Kabul, Herat, Mazar-e-Sharif and Samangan province. Due to atrocities committed against them by the Taliban, the Hazara by and large are opposed to the Taliban.  In August 1998, the Taliban massacred approximately 4,000 Hazara in Mazara-e-Sharif; this massacre was followed by another the next month when the Taliban killed another 500 Hazara in Bamiyan. The Hezb-e Wahdat (Islamic Unity Party of Afghanistan) is an umbrella political organization which commands the support of large numbers of Hazara.  The Hazara are also often at odds with the Kuchi population within the Hazarajat. View the Hazara Tribal Tree

Began as a Shia umbrella party led by Abdul Ali Mazari.  Abdul Ali Mazari died under mysterious circumstances while in custody of the Taliban.  During the Soviet invasion the party received support from Iran.  The party “remains the primary political force among the Hazara."14 During the period of Taliban rule, the party held on to the Hazarajat against the attempted blockade by the Taliban.  It is currently led by Mohammad Karim Khalili, who is currently the Second Vice President to Hamid Karzai.  For a time Haji Mohammad Mohaqeq was the military leader of the party under the political leadership of Khalili.  Mohaqeq and Khalili had a falling out, however, over Mohaqeq’s decision to run for president without the official approval of the party.  Subsequently, Mohaqeq split away and formed his own party, Hezb-e Wahdat-e Eslami-ye Mardom-e Afghanistan.15 The original Wahdat party has begun to lose influence and support among the Hazara, in part because of the pull of Mohaqeq’s new party and likely because Khalili’s position as Second Vice President distracts from his efforts to look after the needs of the Hazara.16

The party is led by Haji Mohammad Mohaqeq, a member of the Wolesi Jirga, and split from Khalili’s Hezb-e Wahdat.  The party seems to be in ascendancy compared to Khalili’s party.  Exact political differences between the two parties is difficult to surmise, but it appears that it is more a matter of leadership than of significant differences in political platforms.  Mohaqeq seems more focused on issues affecting the Hazara and the Hazarajat than his rival Khalili.17  As late as November 2005, Mohaqeq’s party was a part of Yunus Qanuni’s 14 party alliance.18

A Shi’a party originally led by Muhammad Asif Muhsini, the Harakat-e Islami fought the Soviets with support from Tehran. Known for having many Hazara as well as non-Hazara members, this Shi’ite party refused to join the Hazara coalition Hizb-i Wahdat in the ensuing civil war. Since 2005 they have been led by Hojjatolislam Seyyed Muhammad Ali Jawed, a minister in Karzai’s first cabinet.

This party is under the guidance of Abdul Rasool Sayyaf, and has been since the anti-Soviet campaign. Despite ideological and cultural similarities with the Taliban, Sayyaf did not join them (for personal reasons) and sided with the Northern Alliance. He follows strict Wahhabi interpretations of Islam, and is not known for tolerance. In the past this party has been known for its foreign supporters and followers; the former often Arab, the latter from places as diverse as the Southern Philippines, Chechnya, and Bosnia.  In February 1993, government forces and members of the Ittehad-e Islami massacred over 700 Hazara in the Afshar district of West Kabul.

The party of former Mujahid and prime minister Gulbuddin Hekmatyar, HiG was famous for its shifting loyalties, and was the favorite party of Pakistan’s ISI until the rise of the Taliban. Former members continue to wield considerable influence in the province. Faizanullah Faizan was an HiG commander during the civil war.  Several of the Wardak Pashtun religious leaders in the Wardak province have indicated membership or association with HiG.19

Originally a mujahideen group which split with Hekmatyar’s Hezb-e Islami under the leadership of Yunus Khalis.  HiK was dominant in Nangarhar. Khalis died in 2005 or 2006, resulting in an internal power struggle for control of the party between Khalis’ son Anwarul Haq Mujahid and Haji Din Mohammad.  It appears that Mohammad was successful in consolidating his control over much of the party.  Recent and active political players in Nangarhar have connections to HiK.  Led by Haji Din Mohammad, current governor of Kabul.

Primarily (but not exclusively) a Pashtun party, followers of the Sufi holy man Pir Sayed Ahmed Gailani have a reputation for moderate thought and the traditional mystical and introspective religious currents that characterize Sufism in that sect.

Led by Mohammad Yunus Qanuni.  Part of a political alliance called Jabahai Tafahim Millie or National Understanding Front.  Qanuni was the primary contender against Karzai for the presidency.  He is a Tajik who has been a mujahideen, spokesman for Ahmed Shah Massoud, and Minister of Interior and Education.  He was elected to parliament in 2005 and was chosen to lead the Wolesi Jirga.  Support for him and his party may be a political counter-weight to Karzai.

Led by Burhanuddin Rabbani.  It is predominately a Tajik political party which was active in the anti-Soviet jihad and a major political player in the Northern Alliance.  Today Rabbani supports Karzai.  Yunus Qanuni’s Hezb-e Afghanistan Naween broke away from Jamiat-e Islami.  Some of the religious leaders in Wardak have been or are associated with Jamiat-e Islami.

15 Institute for War and Peace Reporting, at Link.

19 Mirwais Wardak, Idrees Zaman, and Kanishka Nawabi, “The Role and Functions of Religious Civil Society in Afghanistan: Case Studies From Sayedabad & Kunduz,” Cooperation for Peace and Unity, July 2007: 16, at Link.