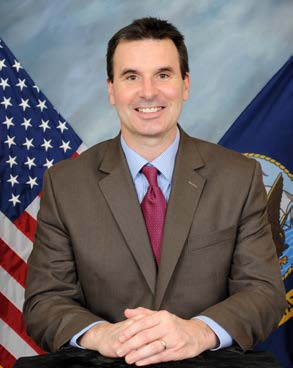 Former Deputy Assistant Secretary of the Navy for Energy

Improving energy efficiency and integrating alternative energy supplies can enhance combat capability, improve operational flexibility, and help better protect Soldiers, Sailors, Airmen, and Marines on the battlefield.  More than ten years ago, then-Lieutenant General James Mattis, coming out of Operation Iraqi Freedom, demanded that we “Unleash [ourselves] from the tether of fuel.”  In the intervening decade, advances in energy and information technology have created new opportunities for progress toward that objective.  Former Deputy Assistant Secretary of the Navy (DoN) for Energy Joe Bryan will discuss the potential for emerging energy technologies to enhance military capabilities, describe policies implemented by the DoN to encourage their adoption, and share his thoughts on potential future developments in energy.

Joseph M. Bryan was appointed as Deputy Assistant Secretary of the Navy for Energy in November 2014. Mr. Bryan served as the Secretariat focal point on all matters pertaining to the Department of Navy’s energy initiatives.

Mr. Bryan joined the Department of the Navy from the United States Senate where he served in several professional staff roles. Most recently, Mr. Bryan was the Investigations Team Lead for the Committee on Armed Services. During his tenure, the committee completed investigations into cyber intrusions affecting U.S. Transportation Command contractors, U.S. costs and allied contributions to support the U.S. military presence overseas, the presence of counterfeit electronic parts in the military supply chain, the use of private security contractors in Afghanistan, and the treatment of detainees in U.S. custody.

From 2005 to January 2007, Mr. Bryan served on the Select Committee on Intelligence, where he advised Senator Carl Levin on legal, policy, and programmatic issues affecting the U.S. Intelligence Community. He also represented Senator Levin in legislative negotiations and investigations into pre-Iraq war intelligence.

From 2001 to April 2005, he was responsible for legislative issues related to Senate Judiciary and Governmental Affairs Committees, including judicial nominations, criminal justice, legal reform, and federal employees.

Earlier in his career, Mr. Bryan worked at the University of Cape Town’s Energy and Development Research Center, Cape Town, South Africa. In this position, he coordinated research and briefings for Chairman of the South African Parliamentary Portfolio Committee on Minerals and Energy on the development and regulation of domestic energy industries. He also advised Namibian Ministry of Minerals and Energy on the development of a white paper to guide development of national energy policy.

Mr. Bryan earned his Bachelor of Arts degree in 1991 from Fordham University and a Master of Arts in Urban Affairs and Public Policy, with a focus on energy and environmental policy from the University of Delaware.