Topographical Features: Spin Ghar and Safed Mountain Ranges along the southern border; belt of forests along southern mountain ranges and in Dara-I-Nur District in north; Khyber Pass in Mahmund Dara District in east; rangleland, bare soil, and rocky outcrop dominate throughout center of the province.

Nangarhar Province is located in eastern Afghanistan, on the Afghanistan - Pakistan border. It is bordered by Kunar and Laghman provinces in the north, Pakistan in the east and south, and Kabul and Logar provinces in the west. Spin Ghar and Safed Mountain Ranges reside along the southern border; belts of forests are in the southern mountain ranges and in Dara-I-Nur District in the north. Khyber Pass is in Mahmund Dara District in the east. The topography is composed of rangeland, bare soil, and rocky outcrops dominate throughout the center of the province.

The 1.2 million Afghans are of primarily Pashtun ethnicity, with Tajiks, Arabs, Pashai, and other minority groups residing within the province. The primary occupations of the residents are agriculture, animal husbandry, day labor, and poppy trade. Their are over 2,000 provincial aid projects in the region with nearly $20 million in planned costs.

The Governor of Nangarhar is Gulab Mangal. At a recent meeting with several tribal elders, the former governor Salim Kunduzi declared he was receiving interference in his duties and could not properly conduct his work. As a result, he resigned from his position as of 2 Oct 2016. Kunduzi did not provide details on any issues or specifics around his resignation.6

Taliban Shadow Governor: Unknown - The previous shadow governor of Nangarhar Province was killed in June 2015 in Peshawar, Pakistan. His replacement is unknown. Furthermore, the Nargarhar Deputy Shadow Governor was arrested in May 2016 along with 7 other fighters.7 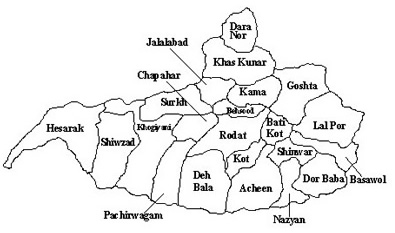 Located primarily in Chaparhar, Dih Bala, Achin, Shinwar, Nazyan, and Dur Baba districts.  Feud with Khogiani.  History of opposing the British and the central government in Kabul.  A major thorn in the side of Amir Abdur Rahman Khan during the 1880s.  They are classified as Eastern, Sarbani Pashtuns. View the Shinwari Tribal Tree

Located primarily in Sherzad, Khogiani, and Pachir Wa Agam districts. Feud with Shinwari and Ghilzai.  History of opposing the British.  They are classified as Karlanri and Hill Tribe Pashtuns. View the Khogiani Tribal Tree

Located primarily in Dara-I Nur and Kuz Kunar districts. Outside of references to Hazrat Ali, the Pashai are outside of most tribal genealogies. They inhabit northern Nangahar, Lagman, and especially Nuristan. Their native tongue is a Dardic language, Dardic being a language group that extends in the foothills of the Hindu Kush from Afghanistan to India. They are first spoken of by Herodotus as “Dardikae.” They straddle the divide between Pashtun and Nuristani, but most seem to consider themselves Pashtun, and it would be unwise to imply otherwise.

They are also often referred to as Kohistani, Kohistan being districts in Badakshan, Afghanistan, and Pakistan. By others they are also occasionally referred to as Shurrhi, a derisive term for “hillbilly"4 They are not known to be allied with any Pashtuns for anything other than expediency’s sake, and their tradition allies are for the most part their fellow hill-tribes such as the Kohistani.

Originally a mujahideen group which broke away from Hekmatyar’s Hezb-e Islami under the leadership of Yunus Khalis.  HiK was dominant in Nangarhar. Khalis died in 2005 or 2006, resulting in an internal power struggle for control of the party between Khalis’ son Anwarul Haq Mujahid and Haji Din Mohammad.  It appears that Mohammad was successful in consolidating his control over much of the party.  Recent and active political players in Nangarhar have connections to HiK.  Led by Haji Din Mohammad, current governor of Kabul.

Led by Anwarul Haq Mujahid.  The faction broke away from HiK following the death of Khalis and the power struggle between Mujahid and Din Mohammad.  The Tora Bora Military Front has openly declared its opposition to US-led forces.  According to the group’s spokesman Qari Sajjad has indicated that the group is under the operational control of Taliban.  For now it appears that the party’s activities are limited to Nangarhar and the surrounding area.

Mujahideen party active since the Soviet invasion; led by Gulbuddin Hekmatyar.  Actively opposed to US-led and Afghan national forces.  Politically active in Sherzad, Surk Rod and Pachir Wa districts.  Hekmatyar is a Kharoti Ghilzai and, therefore, less influential than the much more respected and powerful Khugianis, such as Haji Din Mohammad and Anwarul Haq Mohammad.5

5 Mirwais Wardak, Idrees Zaman, and Kanishka Nawabi, “The Role and Functions of Religious Civil Society in Afghanistan: Case Studies From Sayedabad & Kunduz,” Cooperation for Peace and Unity, (July 2007): 16, at Link.