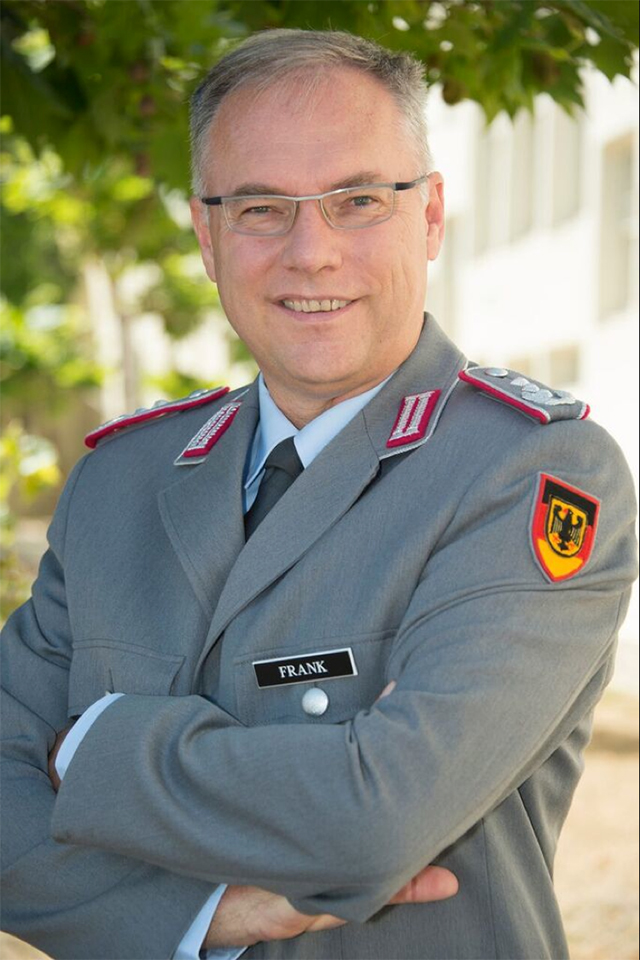 Colonel Frank has held a variety of national and international leadership and staff Positions at the tactical, operational und national ministerial level as well as in NATO operations.

As ACOS G3 Operations, Plans & Exercise, 1st Mountain Division – Munich, he deployed as Military Assistant (MA) COM SFOR, to Bosnia and Herzegovina (BiH), in 2001. From 2003 to 2006 he was assigned to the German Ministry of Defense (MoD) in Berlin as Assistant Branch Chief, Military Policy Issues and Representative of German Interests in NATO, where he gained experience in the military/political interface in the NATO and EU environment. After command of a Support and Transport Battalion, he became a lecturer at the Federal Armed Forces Command and Staff College in Hamburg and Senior Instructor in the German General Staff Course. From 2010 on he was a Military Assistant for the Under Secretary of Defense in the German MoD where he gained in depth experience at the senior most level of decision-making. As Head of the Planning Department (G5), 1st Panzer Division (DEU Army) – Hannover, he deployed operationally to the Balkans as the Assistant Chief of Staff in HQ KFOR - Pristina, responsible for Policy, Plans and Assessment in KFOR within the NATO operation in south eastern Europe. From 2014-2017, COL Frank was the NMR of the German Armed Forces for the Department of National Security Affairs. In October 2017, he became the Senior National Representative and Deputy Dean of Strategic Initiatives, Alumni, Research and Policy Analysis at the George C. Marshall European Center for Security Studies (Garmisch-Partenkirchen, Germany), and then was deployed as the Chief of Staff of the Office High Representative (OHR) in Sarajevo, BiH.