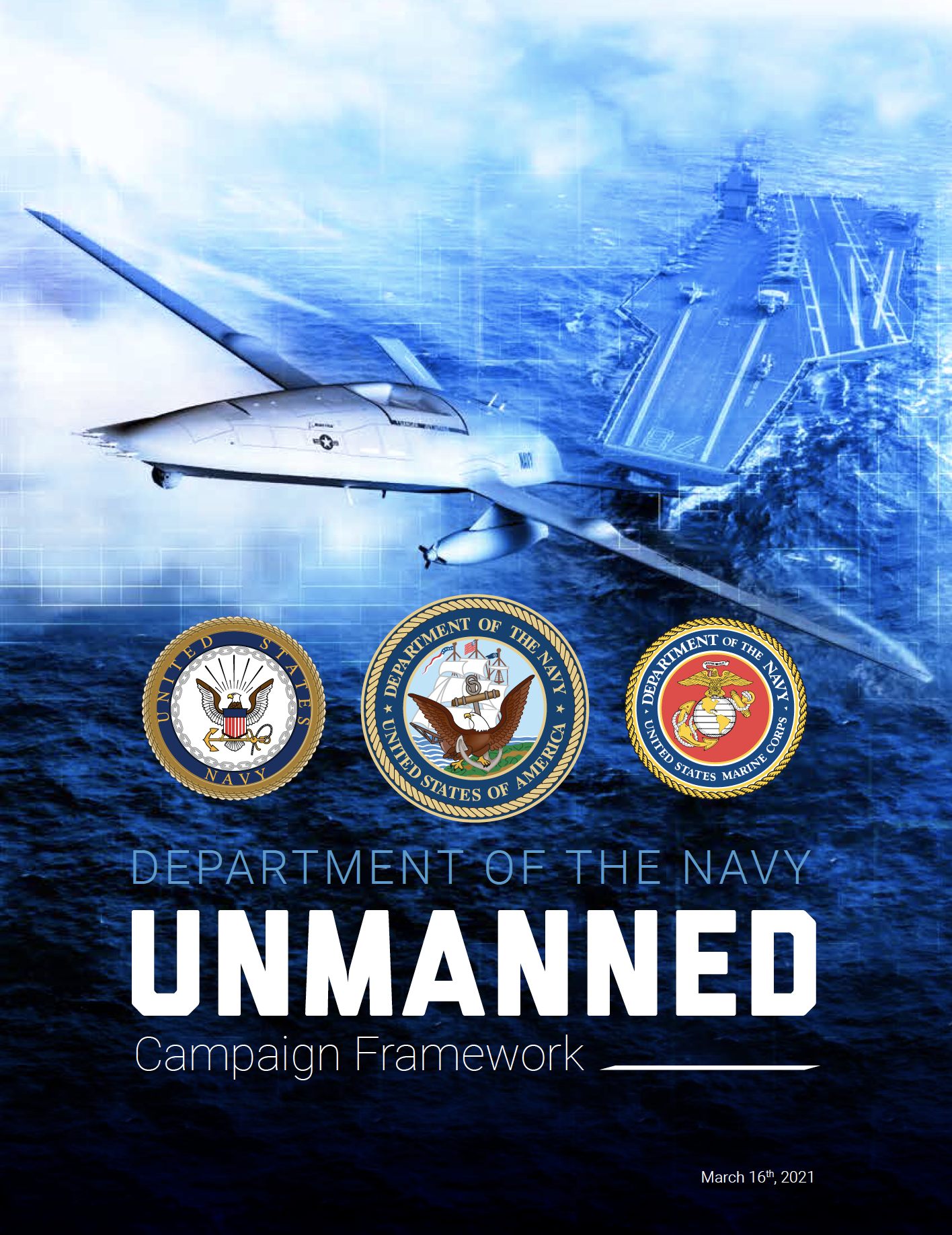 The Department of the Navy issued a new Unmanned Systems Campaign Framework for the Navy and Marine Corps on 16 March 2021.

The Navy and Marine Corps have now taken the next step by aligning our unmanned systems vision to execute Distributed Maritime Operations (DMO) and Littoral Operations in a Contested Environment (LOCE). To ensure success, the Navy and Marine Corps are tightly coupling our requirements, resources, and acquisition policies to develop, build, integrate and deploy effective unmanned systems faster.

The Department of the Navy’s unmanned campaign plan spans the entire doctrine, organization, training, materiel solutions, leadership and education, personnel, facilities and policy construct. This document provides the overarching framework for the campaign plan, and is supported by detailed implementation plans at a higher classification.  Together, they outline a concrete strategy rooted in a realistic assessment of each domain today. The path forward requires a holistic approach to developing and deploying unmanned systems, ensuring that individual technologies can operate within a broader architecture of networked warfighting systems, supported by the right people, policies, operational concepts, and other enablers.

Contributions by the Joint Interagency Field Experimentation Program (JIFX) and other autonomous systems research, development, and educational capabilities at the Naval Postgraduate School are mentioned in the Plan.  The Martin UAS V-BAT VTOL Unmanned Aircraft System, an alumnus of JIFX, is featured on pages 3 and 32.  Martin UAS observed,

JIFX was key to getting the technology noticed.  Access to the Camp Roberts restricted airspace was key for a commercial company with no government sponsor.   Without it we would never have been able to prove capabilities such as the altitude limit, the ability to fly at night, and exercise [Command and Control] at [Beyond the Line of Sight] ranges, none of which could have been demonstrated in the National Air Space without extreme delays and expense.  JIFX also brought several current customers to one place saving our tiny company scarce capital, customers who are currently using V-BATs in limited operational environments. [Emphasis added]

Updates will be posted to this blog entry as we have time to digest the Navy and Marine Corps Unmanned Campaign Framework.  Check back for additional information!

A copy is also available in the SLAMR Knowledge Store!

To the Top icon

The U.S. Navy Should Improve Its Approach to Uncrewed Systems Investments   |   April 11, 2022