CRUSER fulfills its chartered mission by:

CRUSER activities are structured along Innovation Threads starting with a concept generation workshop, through concept development, prototyping, and finally testing – most often in a field environment. Each Innovation Thread spans two years and reflects gaps and opportunities for The Fleet in robotics and autonomy.

Brian Bingham is an Associate Professor in the Mechanical and Aerospace Engineering Department.  Dr. Bingham received his PhD in mechanical engineering from MIT in 2003.  After a brief stint at the Ocean Institute in California, he was appointed to a post-doctoral position at the Woods Hole Oceanographic Institution, Deep Submergence Lab.  Dr. Bingham has served as a member of the faculty at the Franklin W. Olin College of Engineering from 2005-2009 and the University of Hawaii at Manoa from 2009-2015.  His research is on innovative tools for exploring, understanding and protecting the marine environment.  This work includes projects on underwater navigation, autonomous vehicles and sensor integration.

Mara Orescanin is an Assistant Professor in the Oceanography Department at the Naval Postgraduate School where she researches physical processes in the coastal ocean.  Dr. Orescanin received her PhD in 2015 in Mechanical and Ocean Engineering from the Massachusetts Institute of Technology and Woods Hole Oceanographic Institution Joint Program in Oceanography.  Before arriving at NPS in 2016, Dr. Orescanin worked in environmental consulting specializing in hydrodynamic modeling of coastal systems, including a flood risk assessment for the City of Boston.  Since arriving at NPS, Dr. Orescanin has focused on integrating unmanned systems and machine learning into observations of small coastal rivers.

Leo Blanken is an associate professor in the Defense Analysis Department at the Naval Postgraduate School, where his work focuses on special operations and military innovation. He is the author of Rational Empires: Institutional Incentives and Imperial Expansion (University of Chicago Press, 2012) and is co-editor of Assessing War: The Challenge of Measuring Success and Failure (Georgetown University Press, 2015). Leo collects and DJs rare soul and funk records from the 1960s."

Carl Oros is an Assistant Professor in the Information Sciences Department.  Carl is a retired Marine Corps assault support helicopter pilot and holds Master degrees from the USMC Command & Staff College (MMS) and the Naval Postgraduate School (Information Tech. Mgmt).  Prior to retiring in 2009, he served as Military Faculty in the IS Dept. (2004-2009) and ultimately as the NPS Senior Marine Corps Representative (2007-2009).  Since 2003, Carl has been actively engaged in tactical networking and command & control related research and has served as the Principle Investigator for several USMC funded research projects as Co-Investigator/Co-Researcher for the Joint Interagency Field Experimentation (JIFX) program.

Jean Ferreira is a Program Manager in the Information Sciences Department. Jean brings 30 years of experience providing business, fiscal, technical and operational management to government programs and private business enterprises to the position of Operations Manager for both the CRUSER and Field Experimentation research programs. She provides financial management and the development/execution of acquisition strategies to meet the mission of the funded research. She holds degrees in Biology, Chemistry and a Masters in Botany. Prior to her time with NPS, she provided policy and management strategy development and execution of research/restoration projects for the preservation and management of CA native flora on public and private lands.

CRUSER annual reports, available beginning with FY11, include a summary of activities for the year as well as seeded research project summaries. These reports, all processed as NPS Technical Reports, are available through the NPS Dudley Knox Library.

Who We Work With 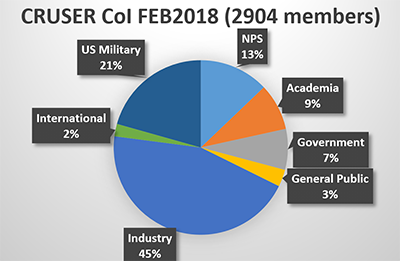