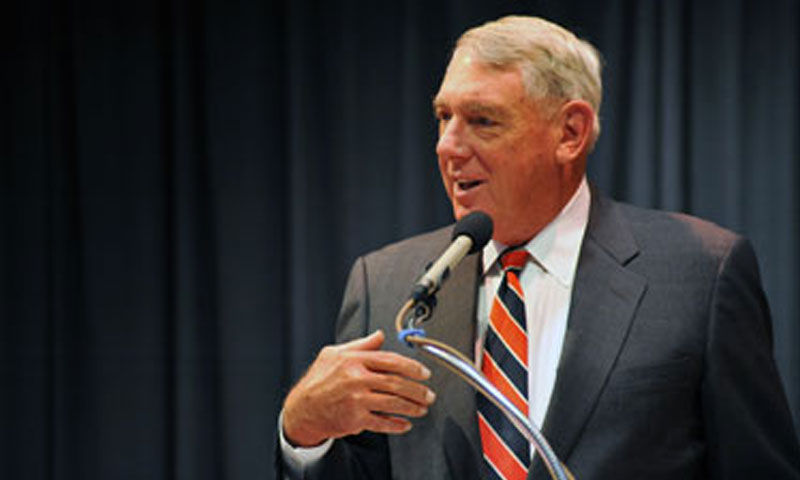 “Admiral Mauz commanded all U.S. naval forces and those of a dozen coalition navies in the Persian Gulf directly under General Schwarzkopf, and the carrier battle group that conducted operations against Libya in 1986 in response to terrorism,” Oliver noted. “He has been a great leader, mentor and friend over the 20 years since I first met him. There is no stronger supporter and proponent of the Naval Postgraduate School. Admiral Mauz is the single person most responsible for NPS being here after the Base Realignment and Closure Commission. We all owe him a great debt.”

“You’re graduating from one of the finest educational institutions in the country,” Mauz told the grads. “My NPS education did more for my career than all of my other degrees combined. It taught me how to make the hard decisions under time pressure with insufficient information using the analytical decision-making I learned here. It also says a lot that when I was [with] Allied Powers Europe in Belgium, my best military staffer by far was a German major who had graduated from NPS in Operations Research. He was a critical thinker and very hard worker who ran circles around the others on the staff.”

“As you leave the Naval Postgraduate School, remember that the American people honor the military over all the other professions, so if you have something to say, say it – they will listen. And in this society, more than in any other, one person can make a difference.”

Mauz shared some key ‘lessons learned’ with the graduates.

“I’ll close with a little career counseling,” he said. “Ask for the hardest job, where you can make the biggest contribution. Seek command at every opportunity, and prepare for it. If you’re serious about your career, go to Washington – it’s where the action is and where you can make the most difference. Keep expanding your mind and, especially, read the great biographies and read about the great battles. Measure yourself against the greatest figures of history and learn from them.

“If you want to know my personal hero, it’s Arleigh Burke, the longest serving Chief of Naval Operations,” Mauz revealed. “He was an inspirational, swashbuckling, aggressive, offensive kind of officer whose advice you should heed. ‘For a leader,’ he said, “it’s good to be colorful.’”

“Finally, as you leave NPS, remember that this school is a resource to you for the rest of your careers. Reach back to the faculty and staff, who are here to help you. You’ve enriched our lives immeasurably and we are better Americans because of you. God speed and God bless.”

Following the ceremony, the new alums and their family members walked through the Christmas-bedecked grand lobby of the Old Del Monte Hotel to gather in the Barbara McNitt Ballroom for the cutting of the class cake. Joining President Daniel Oliver, Executive Vice President and Provost Leonard Ferrari and Mauz for the ceremonial honors was top academic award winner Lt. Cmdr. Andrew Boyden, an intelligence officer studying special operations and irregular warfare in the Department of Defense analysis (DA). Boyden won the prestigious Monterey Council Navy League Award for Highest Academic Achievement for his thesis “Making the Case: What Is the Problem with Targeted Killing?”

“The Defense Analysis Department’s goal of producing critical thinkers best exemplifies the value of my NPS experience,” Boyden said. “The instruction – both formal and informal – on how to read, write, analyze and think critically will be an invaluable asset. I am truly indebted to the professors and staff for the quality of the education and mentoring they gave me over the past 18 months.”

Boyden was among a number of students and four faculty members who received special recognition at the Fall 2009 Graduate and Faculty Awards ceremony held earlier, on Dec. 8. The faculty honors were the Carl E. and Jesse W. Menneken Annual Faculty Award for Excellence in Scientific Research to Assistant Prof. Jamie MacMahan; the Louis D. Liskin Award for Teaching Excellence in the Graduate School of Business and Public Policy to Senior Lecturer Phillip Candreva; the Military Officers Association of America Joint Service Warfare Award to Col. Mark B. Chakwin; and the Rear Adm. Wayne E. Meyer Award for Teaching Excellence in Systems Engineering to Prof. Charles Calvano.

“I figured out a way to significantly increase the accuracy of inexpensive handheld GPS [Global Positioning System] devices from the usual 10-foot [resolution] – if all is going well – down to 40 centimeters,” MacMahan said when asked what he believed had earned him the Menneken research award. “And because they’re so inexpensive, we can afford to deploy ten times as many on drifters as we could before to obtain surf zone flow-field data, which we can now get in much greater detail.”

Of the 389 graduating in the morning ceremony, 264 were military officers – 122 Navy, 31 Marine Corps, 62 Air Force, 47 Army, one Army Reserve and one National Guard; 56 international students; and 70 Department of Defense civilians. Degrees awarded were 204 Master of Science, 106 Master of Arts, 84 Master of Business Administration, one Mechanical Engineer, one Astronautical Engineer and seven dual diplomas. Sixty students – most from a growing number distance learning programs – earned their degrees in absentia.

Graduation Coordinator Sonya Solomon contributed the information on the graduate and faculty awards.