Welcome to the Secretary of the Navy Guest Lecture series!

Guest speakers are an integral part of the student-learning experience at the Naval Postgraduate School. The Secretary of the Navy Guest Lecture (SGL) series exposes students to prominent speakers, recognized as distinguished leaders in their fields of expertise. 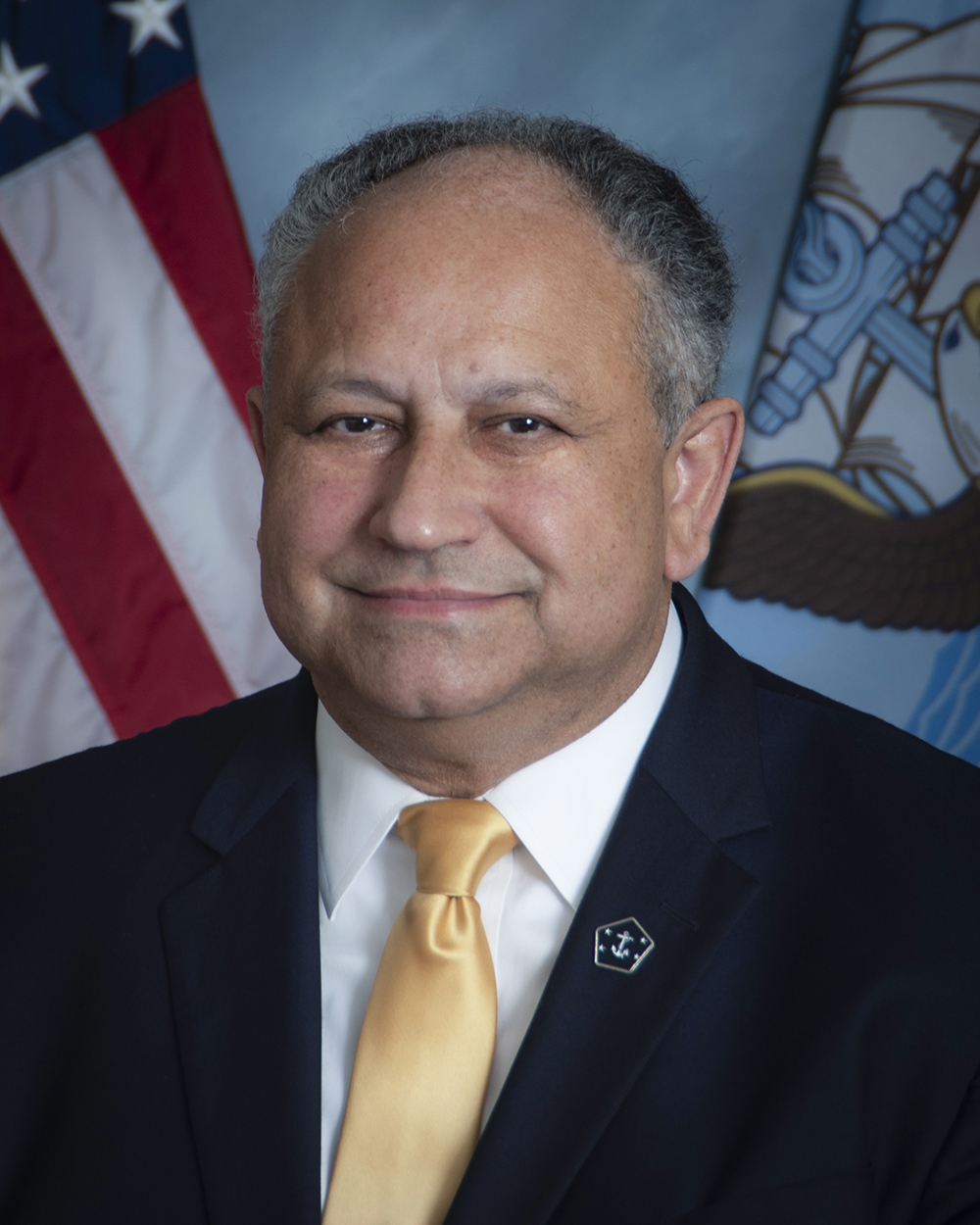 The Honorable Carlos Del Toro, 78th Secretary of the Navy

The Honorable Carlos Del Toro was sworn in as the 78th Secretary of the Navy August 9, 2021. As Secretary, he is responsible for over 900,000 Sailors, Marines, reservists, and civilian personnel and an annual budget exceeding $210 Billion. His priorities include securing the training and equipment successful naval operations demand and addressing the most pressing challenges confronting the US Navy and Marine Corps – China’s naval ambitions, climate instability, Covid’s ongoing impact, and strengthening a naval culture of inclusiveness and respect.

Born in Havana, Cuba, Del Toro immigrated to the U.S. with his family as refugees in 1962. Raised in the Hell’s Kitchen neighborhood of New York City, he attended public schools and received an appointment to the United States Naval Academy, where he earned a Bachelor of Science Degree in Electrical Engineering. Secretary Del Toro was commissioned as a Surface Warfare Officer upon his graduation in 1983. 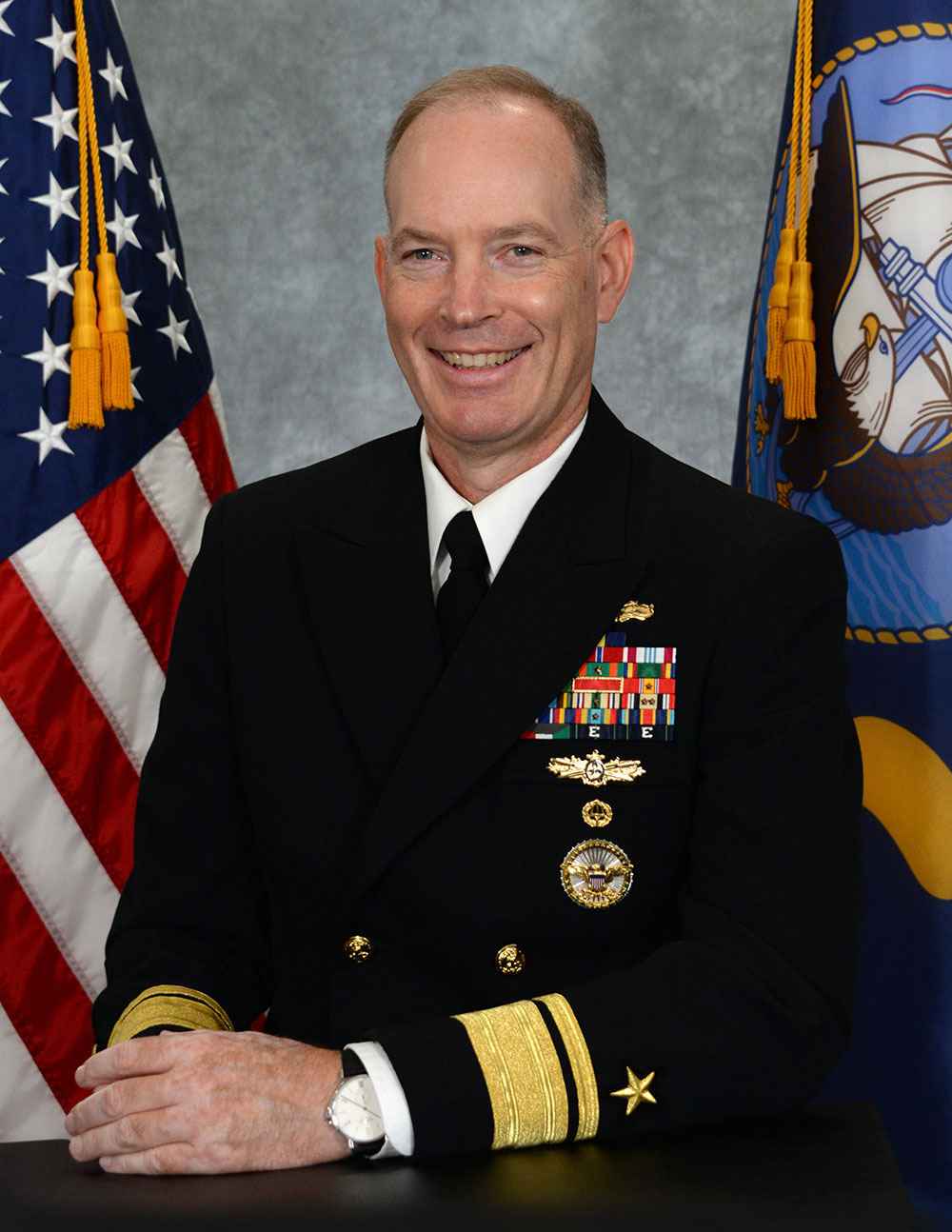 Rear Adm. Doug Small is a native of Birchwood, Wisconsin. He is a 1988 graduate of Marquette University in Milwaukee, Wisconsin, where he received a Bachelor of Science in Physics. He also holds a doctorate degree in physics from the Naval Postgraduate School in Monterey, California.
Small’s operational tours included mechanical division officer and main propulsion assistant on USS Camden (AOE 2), in which he deployed in support of Operation Desert Storm, as well as combat systems officer (plankowner) on USS Iwo Jima (LHD 7). During Operation Iraqi Freedom he served as the first technical director of Joint Crew Composite Squadron (JCCS) 1, assembled by the Navy to assist with defeating then-prevalent radio-controlled improvised explosive devices (IED).

An engineering duty officer since 1997, Small had a number of tours in acquisition, starting at the Naval Surface Warfare Center, Dahlgren Division and then the Missile Defense Agency. Moving to the Program Executive Office for Integrated Warfare Systems (PEO IWS), Small was the electronic warfare assistant and then the major program manager for above water sensors (PEO IWS 2), overseeing the development of improvements for the Navy in electronic warfare and radar. Following this tour he served as the executive assistant to the Assistant Secretary of the Navy for Research, Development and Acquisition. Read complete bio... 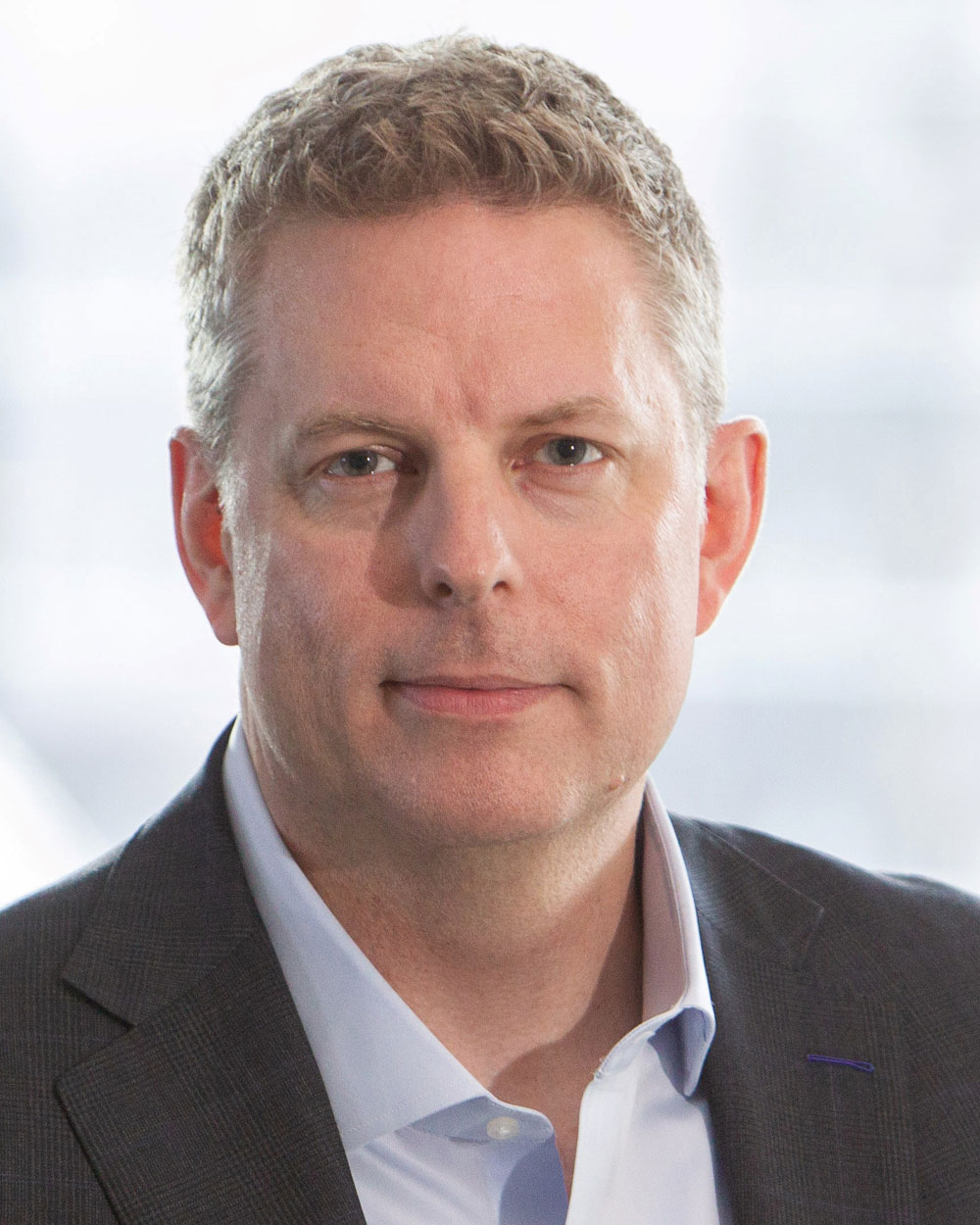 Jason Zander is the executive vice president of the Strategic Missions and Technologies division at Microsoft. In this role, he leads the engineering and sales field organizations incubating technical products and driving scientific discovery to create solutions with transformative potential for the future of cloud computing and continued company growth across telecommunications, Azure Space & Missions Engineering, quantum computing, and Microsoft Federal Sales and Delivery.

Mr. Zander led Microsoft Azure to become a global leader in hyperscale public and sovereign cloud computing, which now serves more than 95% of the Fortune 500. Under his leadership, Azure grew to millions of compute cores with exabytes of storage, while extending customer connectivity on and off the planet to an expanding data center footprint—constituting billions of dollars of capital investments—through a global fiber network and worldwide satellite connectivity. Mr. Zander continues to deliver technical innovation and holds nearly a dozen patents.

Mr. Zander also serves as the Chief Technology Advisor of Titletown Tech in Green Bay, Wisconsin, a partnership between the Green Bay Packers and Microsoft, to build and fund early-stage, high-growth business in the region, and formerly served as a board member of Athenea Health, a leading provider of network-enabled services and mobile apps for medical groups and healthcare systems. Mr. Zander holds a Bachelor of Science degree in Computer Science from Minnesota State University and lives in the Seattle area with his family.

Learn more about:  "Naval Postgraduate School Collaborates With Microsoft To Bring Emerging Technologies To The Fleet” 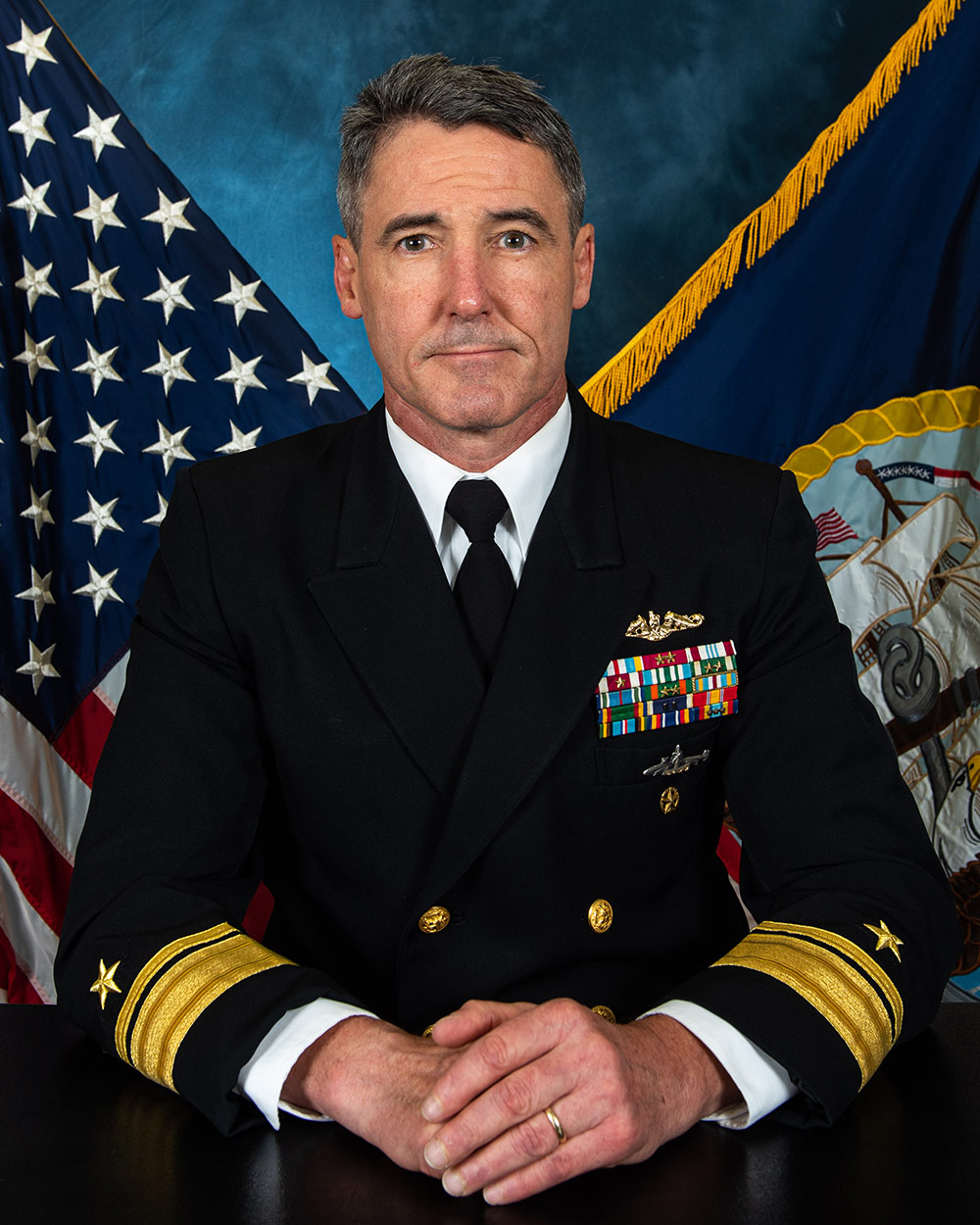 Lecture Topic: The Theory of the Fight: U.S. Pacific Fleet and Indo-Pacific Security

Rear Admiral Blake Converse is a native of Pennsylvania and graduated from Penn State University in 1987 with a Bachelor of Science in Mechanical Engineering. He also holds Master of Science degrees in Space Systems Engineering and Applied Physics from the Naval Postgraduate School.

Before becoming the Secretary of Defense, Dr. Gates was the President of Texas A&M University, the nation's seventh largest university. Prior to assuming the Texas A&M presidency, on August 1, 2002, he served as Interim Dean of the George Bush School of Government and Public Service at Texas A&M from 1999 to 2001.

Secretary Gates joined the Central Intelligence Agency in 1966 and spent nearly 27 years as an intelligence professional. During that period, he spent nearly nine years at the National Security Council, The White House, serving four presidents of both political parties.

Dr. Gates served as Director of Central Intelligence from 1991 until 1993. He is the only career officer in CIA's history to rise from entry-level employee to Director. He served as Deputy Director of Central Intelligence from 1986 until 1989 and as Assistant to the President and Deputy National Security Adviser at the White House from January 20, 1989, until November 6, 1991, for President George H.W. Bush.  Read complete bio...

May 23 - Vice Chief of Naval Operations Talks “Get Real, Get Better” During Latest SGL at NPS

FEB 2 - SECNAV76 Shares His Vision for the Future of NPS

October 12 - Admiral James G. Stavridis, USN (Ret.), Vice Chair, Global Affairs and Managing Director of The Carlyle Group and Chair of the Board of Trustees of the Rockefeller Foundation

April 27- Mr. Joseph Bryan, Senior Advisor on Climate to the Secretary of Defense

July 21- Retired General Keith B. Alexander, USA, Director of the National Security Agency (DIRNSA) and Chief of the Central Security Service (CHCSS) and was the first Commander to lead the United States Cyber Command

January 24- Dr. David Chu, President and CEO of the Institute for Defense Analyses

May 12- Mr. Mark Dankberg, Founder, Chairman and CEO of ViaSat

May 10- Honorable Mr. Robert O. Work, 31st Under Secretary of the Navy

May 18- Dr. Brenda Shaffer, Professor, School of Political Science and Department of Asian Studies at the University of Haifa

May 20- Dr. Charles McQueary, Director, Operational Test & Evaluation, with SECDEF at the DoD

April 29- Mr. Leonard Demi, President of the Defense Committee of the Albanian Parliament

March 11- Mr. Mario Mancuso, Former Under Secretary of Commerce of the United States