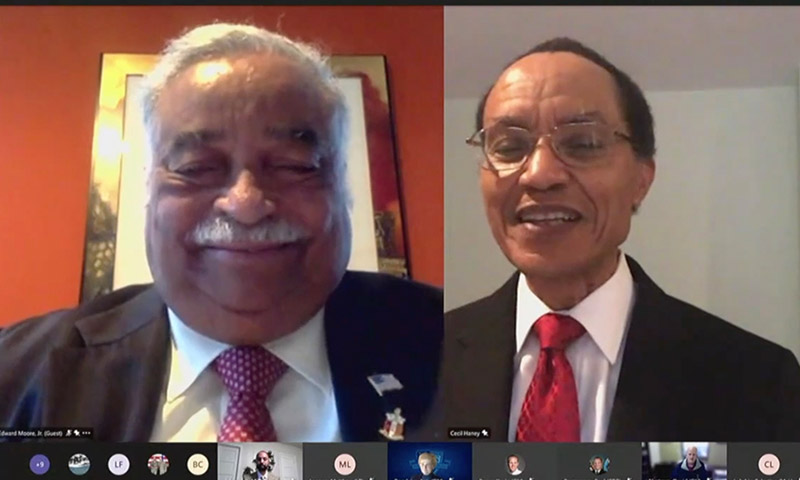 The Naval Postgraduate School (NPS) inducted its newest member, retired Vice Adm. Edward Moore Jr., into the university's prestigious Hall of Fame (HOF) during a virtual ceremony, Jan. 26, making him the 24th person to be welcomed into this revered community since 2001. As a unique addition to Moore’s induction, retired Adm. Cecil Haney presented Moore for induction following his SECNAV Guest Lecture to the university community.

Moore joined the U.S. Naval Reserves as an enlisted Sailor in 1963. In June 1968, he received his degree in Psychology at Southern Illinois University (SIU) and was commissioned as an officer. In 1974 he became a graduate of NPS when he completed his master’s degree in management.

According to Moore, his NPS education was beneficial in several ways, making him a stronger critical thinker and problem solver.

“I found myself using knowledge and analytical skills learned at NPS in most of my subsequent tours whether at sea or ashore, especially my Executive Officer and Commanding Officer tours, and my tour as the Personnel and Manpower division director for the Pacific Fleet,” said Moore.

Moore's service included commanding officer of USS Cowpens in 1989, where he was the ship’s first commander, and the first African American commanding officer of an Aegis-cruiser. While on the Cowpens, Moore led the ship, along with three other ships, in an attack on Iraqi nuclear weapons site in Baghdad on January 17, 1993.

He then went on to serve as commander of U.S Naval Forces in the Persian Gulf in 1996, commanding the Carl Vinson Task Group and Cruiser-Destroyer Group 3 with successful missile strikes against Iraqi military sites in Operation Desert Strike. Upon his promotion to Vice Admiral in 1998, he became the highest ranking African American Naval officer on active duty through his retirement in 2001.

Moore continued to serve the Navy in a different capacity following his retirement, becoming Vice President for Anteon, and later General Dynamics Information Technology, providing personnel to engineering support. He retired fully in 2012 from the business.

He now continues his legacy by giving back to the community. He volunteered at Four Seasons Hemet Veterans Support Group and California Alumni Chapter of Kappa Alpha Psi Fraternity, Inc., helping homeless veterans and youth in Riverside and San Bernardino counties in California. He has been on the board of directors of the San Diego Fleet Week Foundation, San Diego Armed Forces YMCA, Navy Federal Credit Union, Surface Navy Association, and National Boy Scouts of America.

"Amid the controversy surrounding the tearing down of confederate statues and the potential renaming of military bases, I came across an article that mentioned Carl Vinson and his historic support of segregation. It immediately dawned on me that my father, a man who attended school with the Little Rock 9 and their siblings during desegregation, had been stationed to command a ship named after a man who had directly opposed his equality," he wrote.

"It was important for him to be selected because it proves that when brought to the front line, in the light of nomination, people cannot deny great people of their quality of work and consistency regardless of race, religion, or creed," said U.S. Navy Lt. Brandon Carter, am NPS student. "For those who have been disenfranchised or marginalized, it demonstrates to them that the mindset of the powers that are shifting to become more accepting and understanding of hard-working men and women. Men and women who have had the energy to break down social and racial barriers while maintaining an extensive resume of sustained superior performance."

NPS President retired Vice Adm. Ann Rondeau noted that recognizing the incredible service and accomplishments of our most distinguished alumni is an inspiration to the university and all those who serve.

“As a leader, warfighter and trailblazer, it is an honor to formally commend and induct Vice Adm. Moore into our prestigious NPS Hall of Fame,” said Rondeau. “Showcasing individuals who have attained the highest levels of public service and made significant contributions to our Navy and our society can only set the standards for all of us serving who dare to do great and remarkable things.”

"VADM Moore is the epitome of resilience and mental toughness," added Carter. "He has gone from being an enlisted sailor to an officer, becoming the first black person to command an AEGIS Cruiser and reach the highest rank any black person in the Navy has seen and then continued to serve as a senior executive in the defense field. Even after all that, he has been able to still give back to his community because service has been that important to him."

In addition to his NPS Hall of Fame induction, Moore has also been inducted into the Arkansas Black HOF in 1999, SIU distinguished Graduate in 2003 and inducted to the Buffalo Soldiers Museum HOF in 2013.

“It is truly a humbling experience to be recognized by induction into the school’s Hall of Fame,” said Moore. “Thousands of students over the years have benefited from the educational, professional, cultural, social, and environmental skills imparted to them in their time here as a student. Most have probably applied what they learned in productive ways, personally and professionally. So, it is a clear honor to be singled out as having lived up to the expectations that the school has for all students.”

Watch the complete ceremony welcoming Moore into the university’s Hall of Fame on the NPS YouTube Channel.