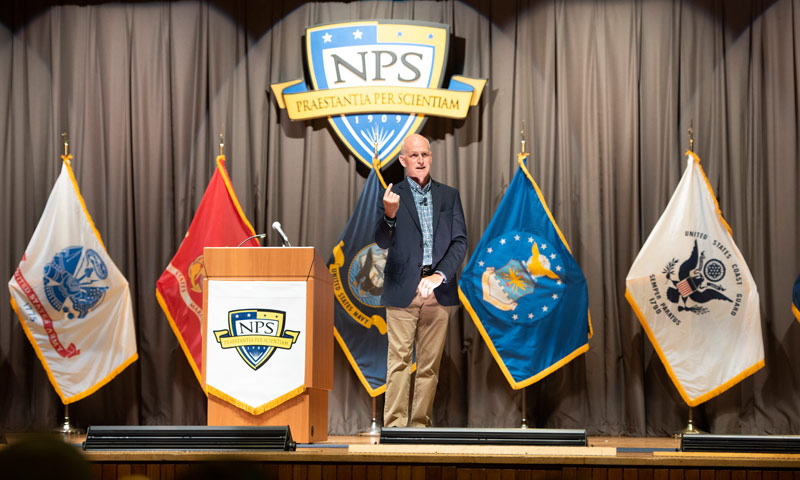 Smith represents the 9th District in the state of Washington, and was the youngest state senator in the nation when he took office in 1991. He has served on the HASC since ‘97, and with his current and former committee assignments, developed keen insight into critical national security issues and challenges. Smith shared some of these insights into how the nation can leverage emerging technologies for defense, recognizing the important role of officers and DOD civilians, well-educated in relevant studies, in achieving these goals.

Smith began his time on campus with a tour and briefings in NPS’ Large Experimentation Annex, a highlight of which is the first-of-its-kind Xerox ElemX 3D Liquid Metal Printer. He was interested in the research that NPS students were working on, using the advanced capabilities of the printer for naval purposes.

“It is important for us to demonstrate our work to people like Congressman Smith, because NPS is unique in that it has young officers like myself with fleet experience,” said U.S. Navy Lt. Jacob Magnusson, a Mechanical Engineering student who presented his thesis. Magnusson is using the ElemX printer to build hollow parts that could potentially be used in submarines to detect noise above the sound layer.

“We can use this fleet experience to identify problems and tailor our studies at NPS to help fix these problems and make the Navy and other Armed Service branches stronger,” Magnusson said.

“It was great show off what NPS can really do,” Magno said. “Congressman Smith seemed very receptive to what we had to say and seemed very interested in what we do.”

After observing some of the innovative efforts NPS students are working on, Smith began his SGL with a focus on innovation and how it serves as the driving force to improve defense technology.

“Everyone in this room knows that the history of warfare is driven in large part by new technologies, new capabilities, and as importantly, who figures out how to use these new capabiltiies best and first,” said Smith. “You’ve got to innovate and you’ve got to apply. It’s been that way back when somebody was the first to figure out how to uses horses in battle and had a tremendous advantage. We have got to be able to innovate and then use that innovation to meet our national security objectives.”

With his 20+ years of service with, and subsequent leadership of, the HASC and its jurisdiction over defense policy, ongoing military operations and acquisitions, Smith said he believes the U.S. has the resources to remain a global leader in tech innovation.

“I think we are still the best, most capable country in the world,” Smith continued. “ When you look at our universities and our capital markets, we have incredible strengths that we can use to meet the challenges that we face. We just have to understand what those challenges are and how to get better at it, specifically how to get better at the innovation and capabilities game.”

During his lecture, Smith covered several obstacles that block opportunities to develop technological leadership in the defense sector.

“One challenge is within the Pentagon, where incentives are somewhat misplaced, and there is not an incentive to innovate,” said Smith. “There is more of an incentive to follow the process and requirements. The culture within the military for a long time was about following a very strict set of rules and a strict set of processes. It lacked any sort of creative approach to problem solving.”

Smith suggested that the rigid culture of following processes needs to change to a more problem solving mindset, such as what NPS teaches its students.

“You’re presented with problems and you figure out how to solve them,” he continued. “Process and requirements don't dominate what you do. Creativity pushes you toward solutions. We have to change that culture within the military to get to that place.”

Another problem Smith referenced focused on the motivations of defense contractors, which can be focused on long-term financial commitments and growth over pure innovation.

“Large companies are capable of innovating, but they innovate when they are threatened,” observed Smith. “Our job in government is to force them to compete because they don’t want to compete, they want to win. … We policy makers, people at the Pentagon, we have got to constantly put the pressure on them to force them to change and force them to innovate.”

Smith observed how budgets may be rigidly committed to long term projects, which leaves no room for innovative research. He also said that Congress needs to be more flexible to not lock themselves into an idea that, just because it is a program that they created, they don’t have to keep sinking funds into it if it’s not producing results.

“The past 20 years have seen a long list of systems that wound up over budget, got canceled, or did not meet needs,” said Smith. “We’ve got to learn from those lessons in terms of how Congress conducts itself, how the Department of Defense conducts itself, how contractors conduct themselves, and get better about how we do it so that we can get more for the dollars that we are spending, meet the rapid pace of technological change, and deter our adversaries and protect this country.”

Whether countering drone swarms, defending against cyber attacks, or finding vulnerabilities in the information systems of adversaries, Smith proclaimed that creative and critical thinkers like the students at NPS are pivotal to the force that overcomes these obstacles to strengthen the country’s defensive technological advantage.

“That’s the type of creativity that we’re going to need to meet the national security needs right now and into the future,” concluded Smith. “Your education, with the teaching that they do here, teaching you to solve problems and be creative, is going to be absolutely crucial to what we’re trying to do.”

Following his lecture, Smith fielded several questions from the NPS student audience on a diverse range of topics, such as combating disinformation in security and policy; the role of legislation in fostering  change in tech innovation; and the role of partnerships in improving acquisition.

NPS President retired Vice Adm. Ann Rondeau thanked Smith for speaking at the first live SGL held on campus since the COVID-19 pandemic, which was also broadcast live online. She challenged the audience to remember and heed the Congressman’s lecture.

“The Chairman of the House Armed Services Committee used a number of words, a number of times: ‘creativity,’ ‘innovation,’ ‘culture,’ and ‘opportunity,”’ said Rondeau. “Those are the kind of words that guide who we are and what we do as you embark on your education and discoveries.”

“Our nation’s military requires advanced education to develop technically competent leaders who understand and can employ technology effectively in the all-domain battlespace: under, on and above the oceans, as well as ashore, in space and in cyberspace. Science and Technology research ensures the technological advantage.  Education drives intellectual dominance and cognitive agility.  Together, they create technological leadership. This is our mission here at NPS.”