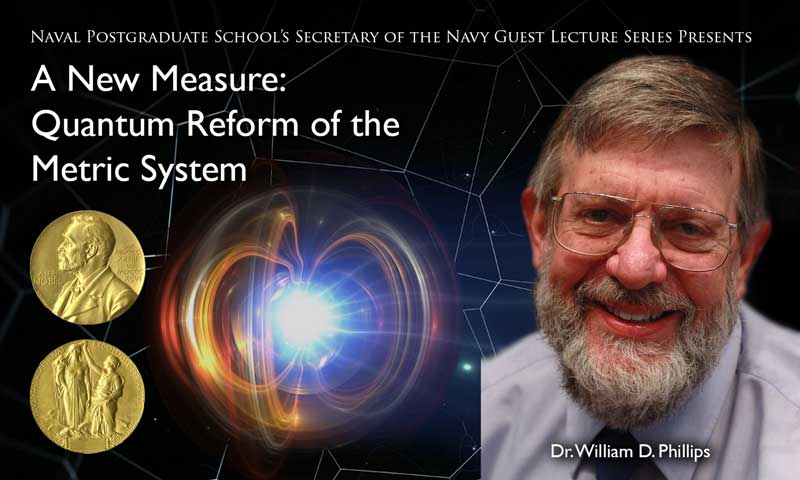 Nobel Prize recipient Dr. William Phillips, a pioneer of atomic timekeeping used by the Navy, spoke virtually to Naval Postgraduate School (NPS) students, faculty and staff on the topic of “Quantum Reform of the Metric System” and how the frontiers of metrology are important to the Navy during the latest Secretary of the Navy Guest Lecture (SGL) series, Feb. 16.

Over the years, Phillips has conducted extensive research at the National Institute of Standards and Technology (NIST), earning him the Nobel Prize in Physics as the leading researcher in the laser cooling and trapping of atoms, leading to new kinds of physics measurements and processes such as high-resolution spectroscopy, atomic clocks, atom optics and atom interferometry. Funded in part by the Office of Naval Research (ONR), Phillip’s work yielded many relevant Naval applications, in particular precision timekeeping, navigation and quantum information.

During the lecture, Phillips spoke on several modern advances in the world of metrology and physics. He explained, as he called it, “the biggest innovation since the French Revolution in measurement.”

“The nature of that revolution was that the international system of units, the modern metric system, was changed in a dramatic way,” said Phillips. “The international system of units bases all measurement on seven base units, the kilogram, the meter, the second, the ampere, the kelvin, the mole and the candela. And today, all of those base units are now defined by fixing values of fundamental constants of nature.”

One change that directly affected the Navy was atomic timekeeping. Now, instead of using a traditional timekeeping method, the United states uses atomic clocks to more accurately navigate the Earth.

“The reason atomic timekeeping is so important is because it improves the accuracy of satellite navigation systems,” said Phillips. “By receiving signals from those atomic clocks, ships at sea, aircraft and ground-based operations can tell not only what time it is, but where they are anywhere on the face of the Earth to within a few meters, almost instantaneously. This is huge for the Navy and huge for not just the rest of the military, but the civilian sector as well.”

Phillips believes that he will continue to work closely with the U.S. Navy and military writ large.

After his prepared remarks, Phillips spent time answering questions from NPS students who asked about fundamental constants, agreement within the scientific world on measurement standards, and validity of other scientific timekeeping methods.

U.S. Navy Lt. Nathan Redder asked, “How certain are we that fundamental constants remain constant after billions of years?” To which Phillips replied, “I believe a constant [with physical dimensions] will remain the same because it has been defined already, and we should be thinking about [dimensionless] constants as possibly changing. But there are smart people who I respect who disagree with me, and there is still room for discussion about this.”

Another student, U.S. Navy Lt. Sasha Barnett asked about the struggles that Phillips and his peers have faced trying to get the world to agree on measurement standards. Phillips responded by saying, “It wasn’t easy. We had to get the United States, China, Russia, England, India, Pakistan and multiple other countries to agree, and they all did. I think that is a testament to scientists from around the world who came together and agreed on something. I think it also gives us hope for the future.”