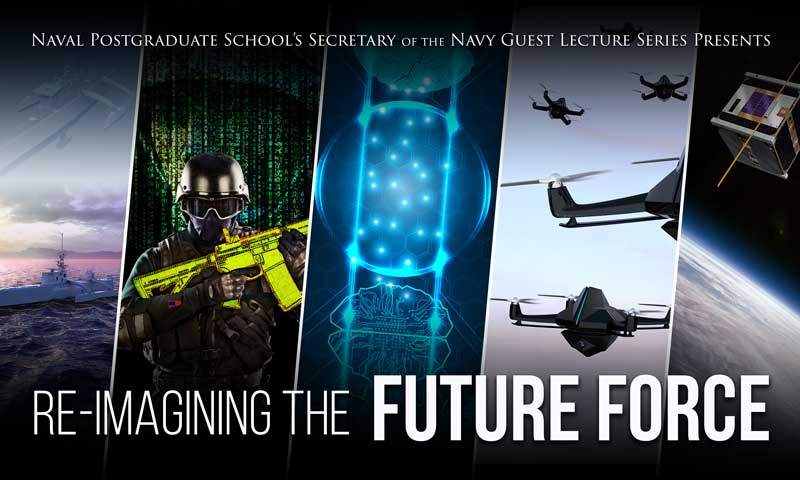 Chief of Naval Research Rear Adm. Lorin C. Selby spoke virtually to Naval Postgraduate School (NPS) students, faculty and staff about “Re-Imagining the Future Force,” and how the United States military is changing and forging ahead in the modern era of Great Power Competition during the latest Secretary of the Navy Guest Lecture (SGL), May 25.

He spoke about many of the large transitions throughout history resulting from innovations. From early humans learning how to preserve food and domesticate farm animals, to the invention of steam engines and eventually wireless commination. He believes that we are on the verge of the next big revolution in technology.

“We are at a pivotal moment in history,” said Selby. “We are in the middle of a new transition in technology, and I think we have to adapt rapidly in order to be successful in the new world that we are entering.”

Selby noted that one of the biggest obstacles the Department of Defense faces is in the acquisition field, saying that things are being invented faster than we can get them to the warfighter.

“I’ve been on a journey for several years trying to figure out how we can keep up with this technology that is racing ahead at its current pace,” said Selby. “This is no longer about changing the acquisition process, it is about restructuring and streamlining the [whole] process.”

Selby spoke about past innovations that were, in his own words, “disruptive technologies,” such as smart phones and nuclear-powered ships, that have forever changed the way people live and militaries operate.

“What’s the next disruptive technology that we can give to the warfighter that will increase their effectiveness?,” asked Selby. “That’s what we are looking for at the Office of Naval Research. We want to put these state-of-the-art things in the hands of the warfighter and ensure that we never have to fight fair with anyone.”

After his prepared remarks, Selby fielded questions from select NPS students, posing questions on everything from the future of directed energy to changes in training pipelines in order to stay current with the latest technologies.

U.S. Marine Corps Capt. Mike Gannon, a student in NPS’ manpower system analysis program, asked, “What is the number one research priority that we cannot afford to fall behind on in this era of Great Power Competition?”

Selby responded by saying, “I think it’s very dangerous to bet on even one new technology. We like to look at a vast array of information because you just never know which may come to fruition in the future. We find it’s better to have a wider, and maybe a little shallower depth to our investments rather than going really deep into one.”

U.S. Navy Lt. Cmdr. Brian Curran, a Ph.D student in applied physics, inquired about the role of directed energy and how it may change the way the Navy fights.

“I think in 20 years you’ll find directed energy on every combatant in the fleet, as well as on noncomabtants and shore locations around the planet,” noted Selby. “While lasers are phenomenal, this is just one of the solutions we’ll have, it’s one arrow in the quiver. The quiver of defensive and offensive assets will be very diverse, and the key will be prioritizing which arrow in your quiver will take on which threat.”

U.S. Air Force Maj. Sean Batson, a student in the Northeast Asia Foreign Area Officer program, asked, “How can the Naval Research Enterprise be able to integrate open mission standards to improve interoperability between the different branches of the armed forces?”

Selby answered by saying, “I think digital engineering needs to be foundational to everything we do. That way we could maintain configuration control and can ensure that the standards that are used at the interface is understood by those that need to understand and not everybody.”

Selby closed with some useful thoughts about leadership and the future.

“Don’t be shy,” Selby advised the students. “We are in a technological race, and it is a race that will be decided in the next 10 years. All of you with bright minds out there who have ideas, I value your input. If you’ve got an idea, throw it on the table, because that idea may be the one that wins the day. If your idea is right, you could be a future disruptor.”

For a deeper dive into future technologies, check out the U.S. Naval Institute’s interview with Selby, where he discusses quantum technology, lasers, research and STEM education.

And check out Selby’s full lecture on the NPS YouTube Channel.