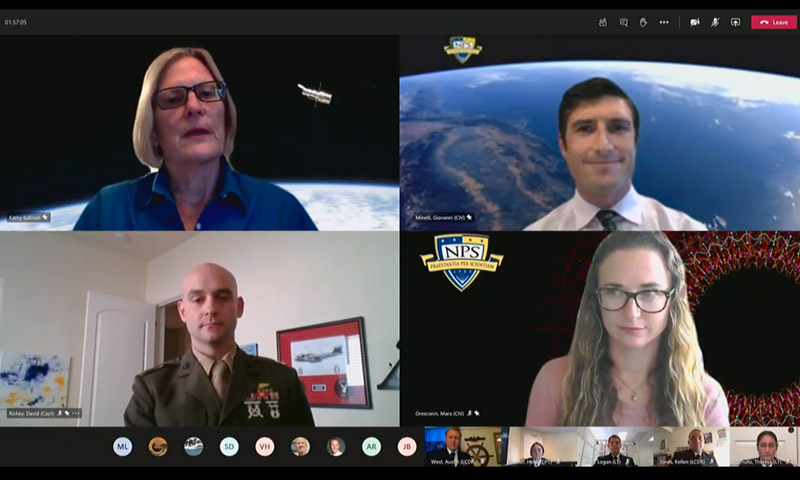 Dr. Kathryn Sullivan, renowned scientist and explorer, who became the first American woman to walk in space and dive to the Earth’s deepest point, spoke virtually to students, faculty and staff about her experiences and lessons learned in space and in the depths of the Marianas Trench during the Naval Postgraduate School’s (NPS) latest virtual Secretary of the Navy Guest Lecture (SGL), held online, Aug. 25.

Sullivan was one of the first six women to join the NASA astronaut corps in 1978 and flew three missions and logged 532 hours in space. Her submersible dive to the Challenger Deep in June of 2020 made her the first person to both orbit the planet and reach its deepest point.

Her lecture titled, “From Sea to Space and Back Again: Lessons from an Unconventional Leadership Journey,” characterized her pursuits as an astronaut and aquanaut as her way to better understand the planet, and encapsulated the leadership lessons needed to work together with others to do it.

“Understanding this planet has always been my quest,” opened Sullivan. “The reason I applied to become an astronaut in the first place was principally because I would get to see the Earth with my own eyes.

“[My motivation] to better understand this planet is to develop and deliver data and information that can help all of us that are living on the planet do so more wisely, more successfully, and more sustainably,” she continued.

Sullivan acknowledged that while she is most known for her time as an astronaut, it’s her journey to the depths of the Marianas Trench in June aboard the deep submergent vehicle (DSV) named Limiting Factor and the technology that is increasing capability for that journey that is forefront in her mind.

“It’s a novel capability and it represents a radical change in mankind’s ability to access the deepest parts of our ocean,” stated Sullivan. “I think it’s not much of a stretch to say that the Limiting Factor and the exploration system it supports is to oceanography of the past like what a moonshot was to space faring in the 60s. In fact, the frequency with which Limiting Factor can reach the bottom or any part of the deep sea is like having the ability to do a moonshot a week. It’s really quite a radical experience.”

Using an infographic, Sullivan showed the depth of the Marianas Trench, which is approximately 10,994 meters, which would be higher than Mt. Everest, and even comparable to the common cruising altitude of a commercial airliners.

“I’ve got a couple thousand hours flying small jets at that altitude, but it never felt quite so high as it did after going all the way to the bottom of the Marianas Trench,” commented Sullivan.

According to Sullivan, seeing something with your own eyes allows for another dimension of understanding. When you experience an environment, like space or the ocean depths, the physical presence creates a deeper level of understanding.

“[During my time aboard] three dives and nine lander deployments in seven days is a tremendous scientific capacity in these deep regions compared to anything that has existed before,” said Sullivan. “It’s a tremendous step forward to do scientific observations on the bottom, with sediment samples, and biological observations via video, and water samples. We’re starting to get the eDNA of the water column in these deep hadal regions and it’s never been done before. The scientific value of just knowing what the bottoms of these trenches are like and how they affect the geology and the biology actually matters.”

After her remarks, Sullivan answered questions from NPS students – Navy, Marine Corps and Army officers – which were moderated by Drs. Mara Orescanin, assistant professor of Oceanography and Giovanni Minelli faculty associate in Space Systems. Faculty and student questions focused on her motivations, and her unconventional way of learning to lead.

Sullivan recalled being in the iconic, visible role as an astronaut yet not having any one directly reporting to her nor having any real authority. However, the responsibilities laid on her and other astronauts carried major significance, such as signing their names on paperwork stating space shuttle systems would bring everyone back alive and ensure mission success. Sullivan noted that those responsibilities revolve very much around that position and the person in it, and it was here where she learned a key distinction between styles of leadership.

“This [position] was where I learned the difference between leading and managing,” said Sullivan. “You have to learn how to bring people along by force of argument, by abundance of data, by mastery of your subject matter, but also by understanding what other people’s leverage points are, what motivates them, and how to engage them because you could yell, scream and throw a tantrum, but no one actually reported to you or had to obey anything that you said. Not every situation is a hammer and nail type of scenario and the same motivation technique will not work for everyone.”

In her final remarks to NPS, Sullivan urged people to never stop learning, and to use mistakes as tools for continual learning. Sullivan, a children’s book author in her own right, expressed something she holds close to her heart is the motto of the character Mrs. Frizzle from the television program, The Magic School Bus, “take chances, make mistakes, and get messy.”

Listen to podcast by USNI with Dr. Sullivan "World's Most Vertical Person"