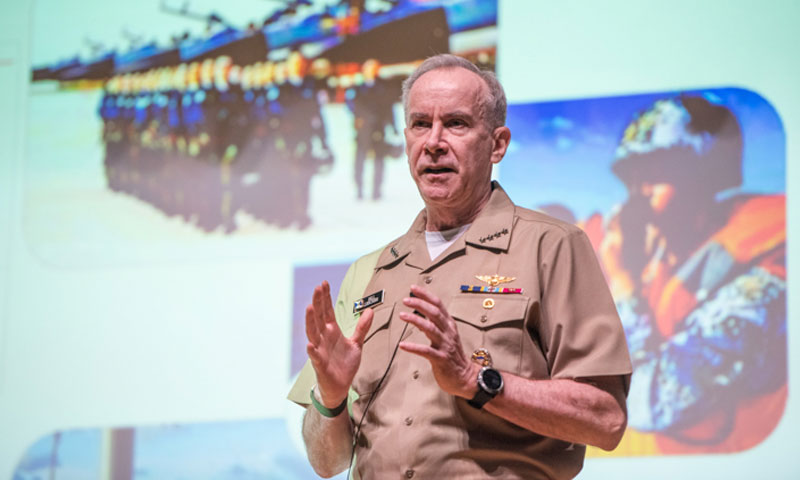 Vice Chief of Naval Operations Adm. William Lescher spoke to Naval Postgraduate School (NPS) students, faculty and staff about the Navy’s “Get Real, Get Better” initiative and how the Navy plans to stay ahead in today’s era of strategic competition during the latest Secretary of the Navy Guest Lecture (SGL), May 4.

Lescher, an NPS graduate who completed his master’s degree in aeronautical engineering while attending the Naval Test Pilot School, spoke about the Navy’s path forward as it transitions from supporting troops deployed into a land-locked region to addressing near-peer competitors such as China and Russia.

“We are going through a change in our strategic context,” said Lescher, who has served as VCNO since May 2020. “We are pivoting from supporting forces ashore for the last 20 years to the new challenge of great power competition.”

Lescher then turned to the emphasis of his message to the NPS community … detailing the Navy’s “Get Real, Get Better” (GRGB) initiative, first announced by Chief of Naval Operations Adm. Michael Gilday in January 2022. GRGB is a call to action for every Navy leader to apply a set of Navy-proven leadership and problem-solving best practices that empower personnel to achieve exceptional performance.

Gilday shared more about the effort at the recent 2022 Surface Navy Association Symposium.

“History shows the navy which adapts, learns, and improves the fastest gains an enduring warfighting advantage. The essential element is fostering an ecosystem – a culture – that assesses, corrects, and innovates better than the opposition,” he said.

The GRGB initiative plans to do just that.

Over the last several years, upper-echelon Navy leaders have spent countless hours observing and taking notes on industry leaders outside of the Department of Defense (DOD) in an effort to improve the Navy’s warfighting ability. They have worked with commercial airlines and studied their maintenance routines and how they consistently have their planes ready. And they have monitored corporate giants like Microsoft and learned how they get technology and innovation moving forward.

“We’ve spent the better part of four years thinking hard, with our heads down, quietly learning about how we can make the Navy better,” Lescher said.

After several years of learning, the Navy created the GRGB structure.

“First, the Navy must get real,” Lescher said. “We have to self-assess and be our own toughest critics. We need to be honest about our abilities and be fully transparent about our performance. Once we ‘embrace the red,’ we will be able to identify solutions and more realistically predict our mission readiness.”

“Secondly, we must get better,” he continued. “We need to be able to self-correct by continuously fixing small problems at the lowest level before they become a large issue. We must identify and fix root causes rather than adapting to issues that arise. And we need to clearly identify people who are accountable at every level.”

After his presentation, Lescher fielded several questions from NPS students regarding the details of the new program and how they can affect change as mid-career officers advancing their effectiveness through graduate education.

More than once, Lescher reiterated to students that they should be courageous, speak truth to power, and be a driving force forward to make the Navy’s processes and assets serve as examples of “world-class performance.”