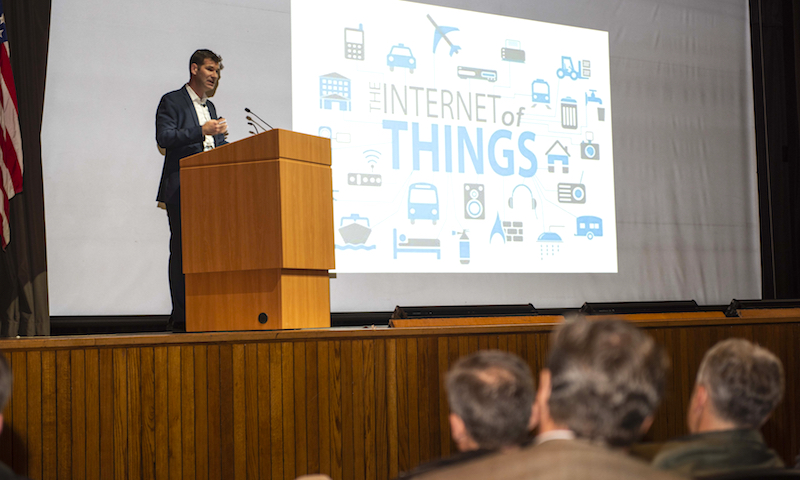 Dr. Peter Singer, senior fellow with the New America Foundation, offers an outlook on future defense challenges and opportunitie to a packed King Auditorium for the latest Secretary of the Navy Guest Lecture (SGL), Jan. 15.

The Naval Postgraduate School (NPS) community took an electrifying journey back to the future Tuesday with one of the nation’s premier technology strategists at the helm.

Dr. Peter Singer, senior fellow with the New America Foundation, spoke with hundreds of NPS students, faculty, and staff about future challenges - and opportunities - in the future of military conflict in a jam-packed King Auditorium for the latest Secretary of the Navy Guest Lecture (SGL) series, Jan. 15.

Through his hourlong presentation, entitled ‘NextWar: Tech Trends Shaping 21st Century Conflict’, Singer implored the audience to embrace the profound technological sea changes the U.S. military will face in the near term.

“Given the amount of change in everything from technology to its implications for doctrine, nations, organizations, and individuals that choose to stand still - that choose not to react to these trends - are making a deliberate choice through their inaction,” he stressed. “They are making a choice to lose the future and I hope none of us do that.”

Singer outlined a series of changes that he argued are not evolutionary in nature, such as missiles or jets that go slightly faster, but are truly game-changing technologies on par with the steam engine in the 1820s, the airplane in the 1920s, or the computer in the 1980s.

What makes them “revolutionary” or “disruptive” is not that they solve any existing problems, but raise a host of fundamental questions that we simply don’t have the answers to, questions that were recently the fodder for science fiction, but now have to be posed by the nation’s government and military officers. These issues encompassed both what was possible that wasn’t possible before, and also new issues of right and wrong.

The most visible changes come in the realm of hardware, especially with the rise of autonomous robotics.

Whether large, centralized craft such as Boeing’s MQ-25 Stingray carrier-based unmanned aerial refueling drone or small, networked swarms of unmanned aerial systems, these systems are able to accomplish a range of tasks, from close air support to logistical resupply and intelligence collection.

“What is fascinating to me with these smaller systems is that individually, the robot is not that smart, but, by being brought together in a system, it can still do highly complex tasks, it can still be highly intelligent,” Singer said. “We are seeing all sorts of interesting examples of this.”

More significantly, underpinning this brave new world are seismic expansions in software and Internet capabilities which run and connect these systems to create an ever-expanding network of networks.

This year marks the 50th anniversary of the creation of ARPANET, which marked the beginning of the information era: computers became not merely calculating devices but the fulcrum of global communications, changing the story of everything from politics to entertainment and military affairs.

Increasingly, everyday items are linked to the Internet which extends our interconnectivity beyond smartphones; an estimated nine billion objects are now part of the ‘Internet of Things’ - toasters, automobiles, power grids, Barbie dolls - and this number is expected to triple over the next five years.

“There are all sorts of things that come out of that, from massive amounts of efficiencies to change in marketplaces, but there’s one problem,” warned Singer. “We are recreating every single one of the mistakes that we made with cybersecurity in the first wave of connected objects: there is zero regulation, basic liability hasn’t been figured out, the linked devices don’t have even the most basic security features, and customers are largely unaware of what they can and are supposed to do.”

Even more, each of these objects, every computer, every smartphone has become a sensor, and every Facebook post, every photograph, and every tweet has become a broadcaster, feeding information into the river of artificial intelligence-driven Big Data, from a hackable Barbie doll to the President of the United States.

This is the subject of Singer’s most recent published book, “LikeWar: the Weaponization of Social Media,” which explores the intersection of military conflict, politics and social media.

“While the truth may be out there, it can be buried underneath a sea of lies like never before,” Singer explained. “This back and forth between the truth and lies has implications not just for our awareness, but it’s shaping everything from the outcome of battles - like the battle of Mosul - to the outcome of elections. It is creating a new kind of power.”

With this in mind, the U.S. military now confronts a paradigm shift and must determine the way forward. It’s too early to have all of the answers, Singer noted, but there are discernable trends to light the way.

“Unlike past technology revolutions, none of these technology areas are inherently governmental, military, or civilian,” he said. “They mix, match and cross whether you’re talking about who designs them, who buys them, or who uses them.”

This opens the door to inherently low barriers to entry and mass proliferation, meaning advanced weapons and technology can readily be in the hands of non-state actors or even individuals; the U.S. and its allies may have to confront adversaries of equal or greater capability, not unlike the Soviet military suddenly facing a mujahadeen bristling with Stinger anti-aircraft missiles in Afghanistan in the 1980s.

Future conflicts will also necessarily be multi-domain, with actions in the cyber or space realm having decisive impacts on land, air or sea, and technologies once thought dominant might suddenly find themselves every bit as outdated and irrelevant as aircraft mounted on battleships in the 1930s.

Age-old debates of quantity vs. quality will also re-emerge, and the tempo of operations will shift in new ways, as seen in the current conflict in Ukraine: the most important battle in its cyber war played out before the first rifle cracks echoed across the Donbass.

Perhaps most significantly, reality itself is under new forms of attack. Singer cited the recent experience of merchant ships in the Black Sea that found their GPS location had been altered, leading the captains to distrust their equipment.

This will also play out on social media. Singer quoted Gen. Stanley McChrystal on how what happens on social media will now be crucial to any debate, battle or war.