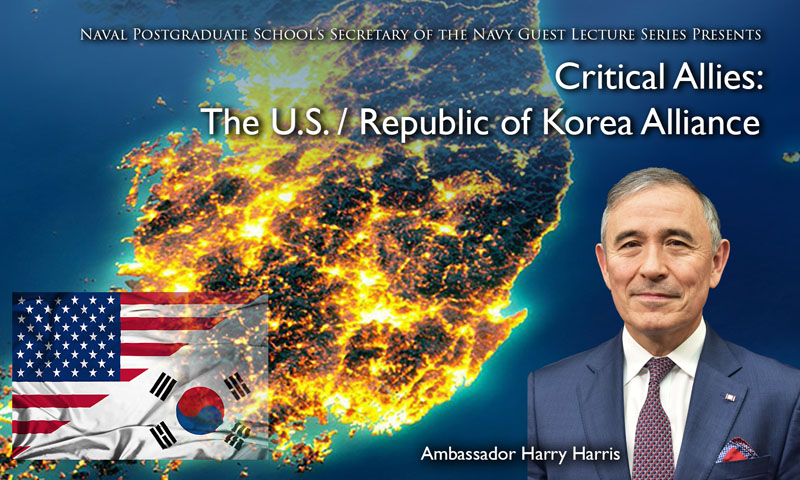 U.S. Ambassador Harry Harris, lauded leader and diplomat, who became the first Asian American to hold four-star rank in the U.S. Navy and is the former commander of U.S. Pacific Command (PACOM), spoke virtually to students, staff and faculty of the Naval Postgraduate School (NPS) about the U.S./Korea Alliance and about his experiences transcending from military service into statesmanship during NPS’ latest virtual Secretary of the Navy Guest Lecture (SGL), held Nov. 17.

While his lecture, titled, “Critical Allies: The U.S. / Republic of Korea Alliance,” explored the many dimensions of the relationship and history of the two countries, the question and answer session afterward focused on contrasting his experiences in the Department of Defense and the State Department, with NPS students – the military’s future leaders – asking the questions.

“Whether you wear the uniform or the suit of a diplomat, alliances are an integral part of U.S. foreign policy,” said Harris to open the lecture. “The U.S./ROK Alliance is dynamic and we have built a multi-dimensional partnership reinforced by shared values, shared concerns and shared economic interest. It’s lasted generations and will continue to thrive for generations to come as long as we together nurture it, resource it, and remain committed to it.”

While recently commemorating the 70th anniversary of the start of the Korean War in June, Harris, born in Japan and raised in Tennessee and Florida, reflected on how the U.S./ROK alliance was forged in battle and would become the lynchpin for stability and security of east Asia.

“Our relationship has grown to encompass many dimensions including trade, people to people ties, and cooperation across a broad range of disciplines,” said Harris. “In addition to our shared history of a blood-forged alliance, the U.S. and ROK continue to develop a strategic partnership supporting our shared interests, objectives, and values in this region and beyond.”

Harris then reflected on when he was the USPACOM Commander (now USINDOPACOM) describing his concerns of the Indo-Pacific’s security environment and how they compared to his concerns today as an ambassador.

“When I was USPACOM Commander, I thought about the proliferation of weapons of mass destruction, an assertive China, a resurgent Russia, as well as the [Democratic People’s Republic of Korea] unresolved history, natural disasters and hazards, and the increasing importance of space and cyber as well as the accelerating rates of change,” said Harris. “Taking a look at what I think about every day in Korea, not much has changed.”

In addition to talking about the strengthening the defense of the Indo-Pacific against mutual threats, Harris talked about Korea’s innovations and benchmark policies in combatting the COVID-19 pandemic, in which the Korean government’s measures to contain the spread of COVID-19 has become a global model for other countries to follow.

“As a recent example of the U.S./ROK partnership, [Korea] has demonstrated the firsthand advantages of partnering in science and technology with an innovative nation,” Harris stated. “Koreans, Americans, and the rest of the world for that matter have all directly benefited from the ROK’s successful response to COVID-19. Korean companies, sister cities, and provinces have shown great generosity in the early months of the pandemic.”

“There are many more South Korean companies that are proactively contributing to the health and well-being of the American communities in which they live and operate,” continued Harris. “We maintain close contact with partners at the Korea Disease Control and Prevention Agency. There is such strong international cooperation. I believe this will ultimately defeat this disease globally.”

In addition to sharing strategies for COVID-19 containment, Korea and the U.S. share in the responsibilities in maintaining strength in the region. Harris noted that the Indo-Pacific region contains four of the world’s six largest economies, and that more people live in this region than all the other world regions combined.

“America has a vested interest in the Indo-Pacific region, and as rival countries compete in the Great Power Competition to flex control of the region, the U.S. seeks to strengthen relationships based on respect, an equal footing, and a fair exchange,” said Harris. “The network of U.S. alliances and partnerships has been at the core of a stable and peaceful Indo-Pacific. No country can shape the future of the region in isolation and no vision for the region is complete without a robust network of sovereign countries cooperating to secure their collective interests.”

After his prepared remarks, Harris spent time answering a series of questions from NPS students – Navy, Marine Corps, Space Force, Coast Guard and international officers – who asked about his transition from the Defense department to State Department, challenges in the region with regards to China and the DPRK, and for words of wisdom.

“I’ll make an observation that I noticed when I was in uniform,” said Harris. “The military has no monopoly on courage. We see foreign service professionals who are on the front lines of diplomacy. They’re running Provincial Reconstruction Teams in Afghanistan and in Iraq. An IED will kill a Foreign Service Officer just as quickly as it would kill a uniformed service member.

The final question of the day belonged to Coast Guard Lt. Cmdr. James Reilly, who asked if Harris had any words of wisdom he’d like to impart to NPS’ mid-career officer students.

“Civility and cheerfulness matters,” imparted Harris. “I tend to take a cheerful and positive attitude into the jobs I take. But the most important thing is, whether you fly airplanes, drive ships, space ships or launch missiles, competence matters more than anything else.

“You need to be an expert in your warfare specialty first before you can become a geo-political thinker,” noted Harris. “So become the expert in your field and then branch out to bigger things.”

To watch the complete lecture and student Q&A session with Ambassador Harris, visit the SGL website or NPS YouTube channel.