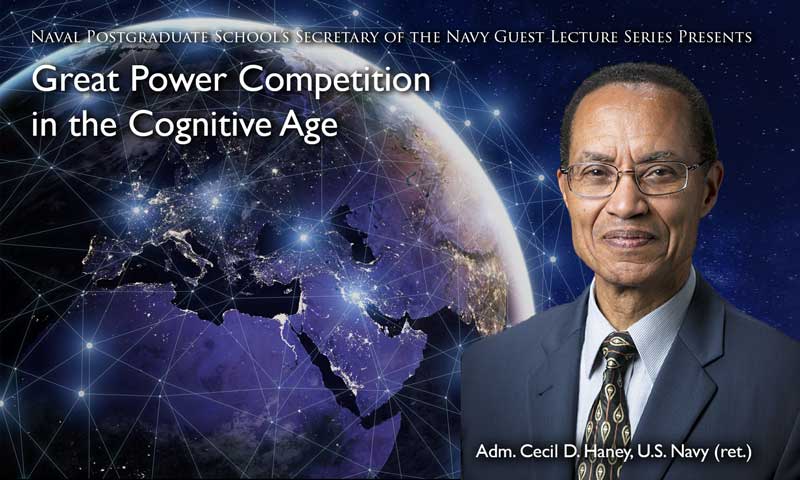 Haney explored the strategic objectives of China and Russia – peer competitors of the U.S.– and why there must be a continued emphasis on strategic deterrence. Due to the recently published Tri-Service Maritime Strategy, which aligns the U.S. Navy, Marine Corps and Coast Guard to achieve an “advantage at sea” over China and Russia, Haney’s guest lecture is another example of NPS fostering cognitive and intellectual advantage by discussing the strategies, problem sets and potential solutions associated with Great Power Competition.

“The global security environment today is more complex, dynamic and volatile than at any other time in our history,” noted Haney. “We must take advantage of the Naval Postgraduate School environment to expand your knowledge of the competitor nations, their culture, their perspective, their ideology, and their objectives, holistically. The dangers presented by this unpredictable security environment are compounded by the continued propagation of asymmetric methods, unprecedented proliferation of advancing technologies, and the dual use nature of the acceleration of technical development outside normal national security channels in the commercial and academic circles.”

“Now Russia and China are investing in long term military modernization programs that could pose an existential threat to the United States,” continued Haney. “Russia seeks to reassert itself as a great power and at the cost of its neighbors and regional stability. Even with its strained economy, Russia continues to modernize its triad of nuclear forces while China is pursuing regional dominance in the East and South China Seas and also continues to make significant military investments to its nuclear and conventional capabilities.”

With these existential threats in mind, Haney stressed the familiar concept of deterrence. He suggested that we master deterrence to ensure no adversary is able to escalate their way out of a failed conflict and they understand that we can and will, if necessary, respond in a time, place and manner of our choosing.

“Deterrence is fundamentally a human endeavor, firmly rooted in psychology and social behavior,” said Haney. “The first is an aggressor‘s recognition that unacceptable costs may be imposed for taking an action, and recognition that foregoing this action may result in lesser costs. The second is an aggressor’s belief that the contemplated action will not produce its perceived benefit, or that not acting will produce a greater benefit.”

Put another way, deterrence is creating a risk to our adversaries that is not worth any potential gain by aggressive actions.

“Today, as we craft meaningful strategic and operational plans and carry out strategic operations, the key to deterrence is maximizing leadership decision space, particularly that of the President of the United States,” said Haney.

He went on to explain that this requires timely intelligence, command and control to move information to decision makers, synthesis of dedicated sensors, and a robust combination of missile defense, conventional forces, cyberspace architecture and credible nuclear weapons that inform polices, treaties and plans that link and knit organizations and capabilities together that provide leaders with options.

“Taken together this deterrent capability must ensure that even in crisis, strategic stability will remain intact and ensure that any adversary understands they will not get the benefits they seek and the cost will be too much to bear if they employ nuclear weapons.”

After his prepared remarks, Haney spent time answering a series of questions from NPS students from the Navy, Marine Corps and Air Force – who asked about increasing partnerships at strategic choke points, adversaries weaponizing information on a strategic scale, and using artificial intelligence to augment sensors.

The cognitive aptitude of the students did not disappoint Haney.

“The Naval Postgraduate School and advanced education is so important now, and in the future,” said Haney. “[NPS] develops the critical thinkers in so many areas, and develops new concept of operations and capabilities to address the threats in this 21st century in a collaborative and free-thinking way.”

Following the lecture, Haney joined NPS President retired Vice Adm. Ann Rondeau to induct retired Vice Adm. Edward Moore Jr. into the university's prestigious Hall of Fame (HOF) during a virtual induction ceremony. Moore was a trailblazer who at the time of his retirement in 2001 was the highest-ranking black officer in the Navy.

The university has also launched a number of GPC-focused educational initiatives, including a seminar course and multiple graduate certificate programs, with more planned offerings in development.