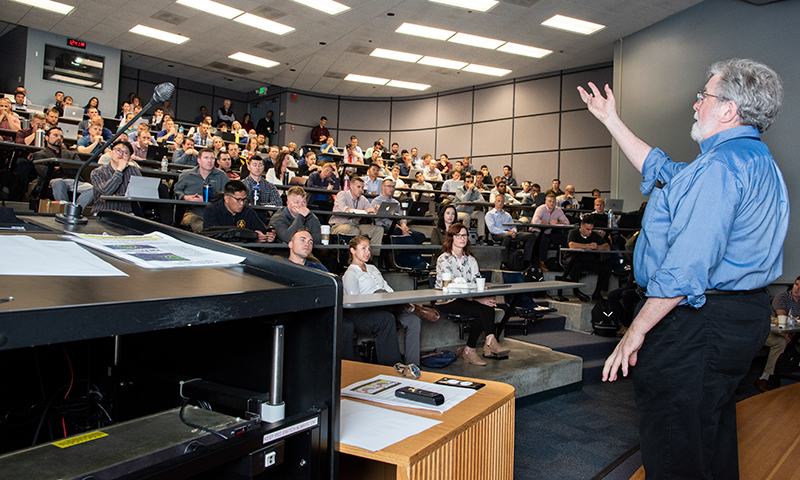 NPS Professor Daniel Moran holds the first of 20 lectures, July 8, for an all-new course seeking to advance the NPS student community’s understanding of the history and nuance of Great Power Competition (GPC). Responding to a direct leadership request to integrate more GPC studies into its curriculum, the university launched the course open to all interested students, faculty and staff.

The Naval Postgraduate School’s (NPS) Department of National Security Affairs (NSA) has launched an initiative to help students from every curriculum better understand the history and nuances behind Great Power Competition (GPC).

NS4000 held its first open lecture on the first day of the Summer quarter, July 8, to a packed auditorium on hand for the seminar-style, one unit course intended to provide a broader understanding of the challenges facing the U.S. in the 21st century by peer adversaries.

According to NSA Program Officer Cmdr. Paul Rasmussen, the course supports the 2018 National Defense Strategy, and is in direct response to the March 2019 program review with senior Navy leadership.

“During the NSA department’s last curriculum review, our main sponsor, Director, Global Integration and Engagement Office of the CNO Rear Adm. Will Pennington, said we needed to have more GPC in our curriculum,” said NSA Program Officer Cmdr. Paul Rasmussen.

NSA Department Chair Clay Moltz took the lead on developing the course, providing leadership with a proposal outlining the essential elements. It was reviewed by NPS’ academic council and given the green light to be organized as a one-credit course.

NSA Professor Daniel Moran opened the inaugural lecture with his brief overview of the underlying dynamics of GPC historically, its Cold War manifestations in the bipolar arms race, and what has changed in the new century. Moran’s expertise includes modern international and military history, strategic theory and he’s an authority on the works of Carl von Clausewitz.

Moran is one of 14 NSA expert lecturers who will examine the political, economic and military drivers that have contributed to this current security environment. Over the next three months, lectures will discuss Chinese and Russian efforts to extend their influence into critical regions of the world, as well as the challenges this behavior poses to U.S. interests. The course will later focus on GPC dynamics in several key functional areas, such as economics, cyber, space and energy. Finally, the course concludes with a discussion of possible future outcomes in the context of varied U.S. and allied responses.

On hand to introduce the new course, Moltz explained the importance of understanding American adversaries’ race for influence and superiority around the globe.

“Just within the last five years, Chinese revisionism and Russian revanchism have posed a series of threats to the U.S. and to our allies,” said Moltz.

He pointed to the recent decision in China to remove its constitutional two-term limit for the presidency, clearing the way for Xi Jinping to rule beyond 2023, a move which came as a surprise to the world, Moltz noted. He also discussed similar aggressive actions and policy changes in Russia that could provide Vladimir Putin with an opportunity to serve a fourth term, setting the stage for the discussions to follow.

The new course will meet from 12 noon to 1:00 p.m. on Mondays and Wednesdays throughout the Summer quarter. In order to receive credit, NPS students who registered for the one unit course are required to attend all 20 sessions and do the course readings for each lecture. In the future this course may be expanded to a wider DOD audience through distance learning and have graduate level writing requirements. The course is also open to all NPS students, faculty and staff who wish to attend individual lectures they might be interested in. For more information, contact the NS4000 course coordinator, Angela Archambault.