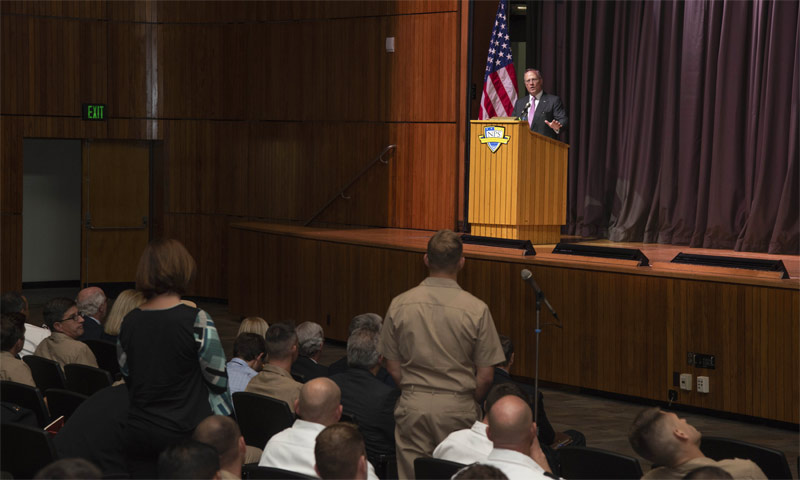 “It is certainly a tremendous honor to be with you here today,” said Perot, who came to NPS through the new NPS Foundation speaker’s initiative. “This crowd is a very talented group of men and women, and some of the finest citizens our nation has. One of my goals is to really listen to you, and try to get an idea of what is on your mind in hopes that some of my insights in business around the world can help.”

An aviator, Perot continued in his family’s history of military service, joining the Air Force as a pilot in 1983, serving for eight years. Perot also garnered widespread recognition when he circumnavigated the globe while co-piloting a Bell 206 L-1 Long Ranger II helicopter named ‘The Spirit of Texas’ over a 30-day period.

Perot, however, began his presentation with a discussion of his father, Ross Perot, who gained nationwide notoriety during his presidential campaigns in 1992 and 1996.

“The military has meant a huge amount to my family,” said Perot Jr. “If you look back and look at the history of my father, the first break he had in life is when he was appointed to the Naval Academy.

“[Years later] he was on the bridge of a destroyer and an IBM executive was talking to him. He said, ‘Young man, when you leave the Navy, I would like to offer you a job at IBM,’” he continued. “My father left the Navy, moved to Dallas/Fort Worth and would go on to become the top IBM salesmen in the nation.”

Perot then took the time to cover the long and extensive business career of his father, who would leave IBM in 1963 to create Electronic Data Systems (EDS) in Dallas, courting large corporations for his data processing services. During his time at EDS, he received lucrative contracts from the U.S. government to computerize Medicare records until the company was partially bought by General Motors for $2.4 billion in 1984.

“A big lesson I learned from my father’s success is that, when you are involved in these big organizations with big bureaucracies, do not be afraid to change. Don’t be afraid to go against conventional wisdom,” said Perot. “If you look at the success that my father and my family has had, it has always been as a result of going against conventional wisdom.”

Perot would go on to describe his father’s motivations. Although he became widely successful as a businessman, Perot noted his father was far more driven by a desire to serve the nation, and to help the men and woman of the military.

“My father began talking to the wives of prisoners of war from the Vietnam War era. They did not know if their husbands were alive, and had not communicated with them for years,” Perot said.

Compelled to do something about it, he continued, “My father picked up the cause and he started a nationwide effort to focus on the plight of the POWs in Vietnam.”

Perot also discussed his father’s reaction to the imprisonment of two EDS employees in Iran in the late 1970s, and the harrowing rescue that brought them home. “This is the kind of activity that I saw growing up, with my four sisters and I watching my father,” said Perot.

Perot then shifted his discussion to his perspective on business, and some of the innovative efforts his Perot Group company is involved in.

“We are now one of the larger developers for Amazon in the country. As they continue to innovate to stay ahead of the competition, we are rapidly changing in order to meet those demands,” he noted.

Continuing on topic with Amazon and the changing nature of industry, Perot turned his attention to the privatization of space. In particular, how private sector competition “is causing one of the great revolutions of our world that will make low earth orbit affordable and continue to change our lives.”

“We are also looking at partnerships with Uber, and in particular their vision for Uber Elevate,” said Perot. “They want to build 20,000 autonomous flying vehicles across the United States with the goal that, at the push of an app, a completely electric flying vehicle can be anywhere at any time.”

While there are certainly challenges in bringing this kind of service to market, it is much closer to reality than those in the audience might think, he noted.

Perot also discussed the ever-changing role of industry and business in diplomatic affairs, including the buildup of oil pipelines by the Russians and Chinese in Iraq to get a foot hold in the middle east, as well as shifting economic alliances including increasing economic cooperation with India. He connected these economic issues to the topical studies of the university’s students, especially those examining the dynamics of soft power and foreign policy.

“What you are learning in this school, and where you are going in your careers, at the end of the day, critical importance will placed on soft power,” said Perot. “It is our diplomatic power, and your ability to get along with your counterparts, that will be the key to maintain peace in the world.”

Perot spent a great deal of his time with the NPS community to field questions from the audience on a wide range of topics, including trade policies, wages, automation, presidential politics, American values and even his ownership of the basketball franchise, the Dallas Mavericks.

“When our values and our systems come to other countries, we make those countries better,” said Perot while answering a question on competing with Chinese influence and their ‘One belt, one road’ strategy, which seeks to improve cooperation between China and other Eurasian countries.

“Most enlightened leaders know this, and if they want corruption and Chinese money they will take it,” he continued. “Our economic power, our military power, our system of government, our cultures and our values are second to none, and if you factor in all of that these countries will want us and want to be like us.”

This was the first of the SGL series to be sponsored by the NPS Foundation speaker’s initiative, designed to enrich the university’s SGL program through unique engagements. The longstanding SGL program provides a series of professional lectures by senior leaders throughout defense, government, industry and academia designed to help the university's students and faculty link their studies, teaching and research efforts to the defense needs of the nation.