A Message From the NPS President: Women’s History Month

A Message From the NPS President: Women’s History Month 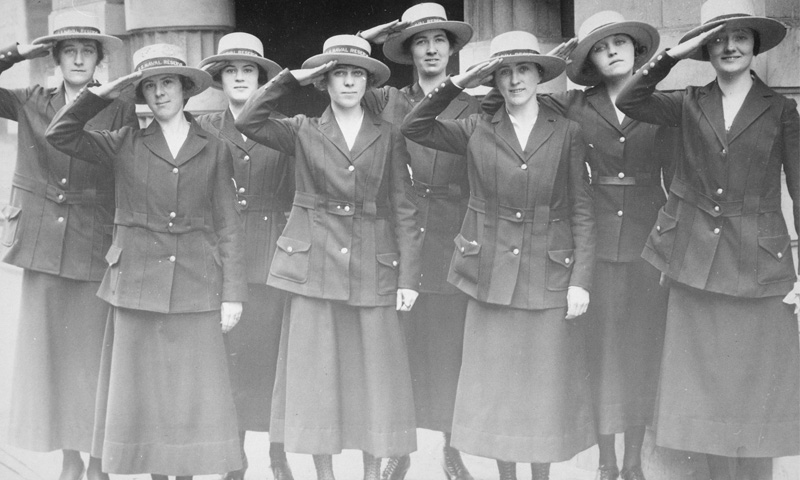 Eight female yeomen attached to the Naval Reserve stand together in uniform saluting, San Francisco, California, June, 1918. Image courtesy National Archives. By the signing of the 11 November 1918 armistice between the Allies and Germany, a total of 11,275 Yeomen (F) had served in the Navy.

Today marks the 104th anniversary of when women were first authorized to enlist in the U.S Navy. As we celebrate Women’s History Month, I want to take this opportunity to be mindful of the leaders who came before us, the legacy we inherit, and the responsibility we all have as leaders to lower barriers and strengthen others thereby raising everyone’s potential to contribute their best to benefit all.

Women have volunteered to serve our country during every war or conflict since the American Revolution, but on 19 March 1917, Secretary of the Navy Josephus Daniels made it official and enabled women to enlist to alleviate a then projected shortage of clerical workers. Two days later, Loretta Perfectus Walsh of Olyphant, Pennsylvania, became the first woman to enlist, and by the time war with Germany was officially declared on 6 April, over 200 women had joined her, all serving under Class 4 of the 1916 United States Naval Reserve Force. The positions they filled included work as couriers, draftsmen, fingerprint experts, masters-at-arms, mess attendants, paymasters, recruiters, switchboard operators, and translators. A select few worked overseas at base hospitals in France and in naval intelligence in Puerto Rico. Female reservists also participated in Victory Loan Drives and parades. No basic training was available to women at the time, so the enlisted women took classes and learned how to drill in the evenings. By the signing of the 11 November 1918 armistice between the Allies and Germany, a total of 11,275 Yeomen (F) had served in the Navy.

The impact and importance of women service members continued to grow.  On 30 July 1942, the Navy established the women’s reserve program and paved the way for officer and enlisted women to expand their ability to serve. By 19 October 1944, with the President’s authorization, the Navy announced the decision to consolidate its female reserve program. The first African-American WAVES reported for training on 28 December 1944 at Hunter College in New York City. Coming from the North and the South—Minnesota, Massachusetts, Illinois, New York, Georgia, and Alabama—the first recruits entered on a fully integrated basis.

Leadership opportunities for women grew, and on 22 February 1974, the Navy designated the first woman aviator. Then, on 7 March 1994, the Navy issued the first orders for women to be assigned aboard a combatant ship, the USS Dwight D. Eisenhower (CVN-69).  Since then, 11 naval ships have been named in honor of notable women. In 2014, Michelle Howard became the first woman to earn the rank of four-star admiral when she took over as Vice Chief of Naval Operations. Then, in 2015, women were permitted to serve in direct ground combat roles, a historic change that opened up hundreds of thousands of jobs for women in the military. Today, about 17 percent of active duty military are women and 53,000 of them are in the Navy supporting an array of traditional and non-traditional ratings or careers, and in every rank and every job from combat systems specialists to deep-sea divers.

NPS has built its distinguished legacy with that of the Navy and Marine Corps and provided opportunities for generations of women to hone leadership skills that prepare them to forge new futures, frame new perspectives, and continue their record of exceptional service. Beginning in 1951, when the School’s first female graduate, Lt Elinor Jane Writt, earned her M.S. in Aerological Engineering, a cadre of distinguished women have graduated from NPS, including retired Vice Adm. Patricia Tracey, the first female to earn three stars in the Navy; retired Vice Adm. Jan Tighe, the first female to serve as a Numbered Fleet Commander when she became Commander, U.S. TENTH FLEET/Fleet Cyber Command, both Hall of Fame recipients; and USMC Major Jasmin Moghbeli, a NASA astronaut who may very well become the first female to walk on the moon.

As we look back to recognize yesterday’s achievements, let them inspire us as we look ahead to tomorrow. NPS is proud to be a welcoming institution where talented leaders from across the Naval service, DOD, federal government, and allied nations from around the world, come to flourish, no matter their gender, backgrounds, ethnicity, and life experiences. This month, please join me in saluting our women leaders here in our NPS community, in our military, and across our nation as we honor and celebrate women’s history.