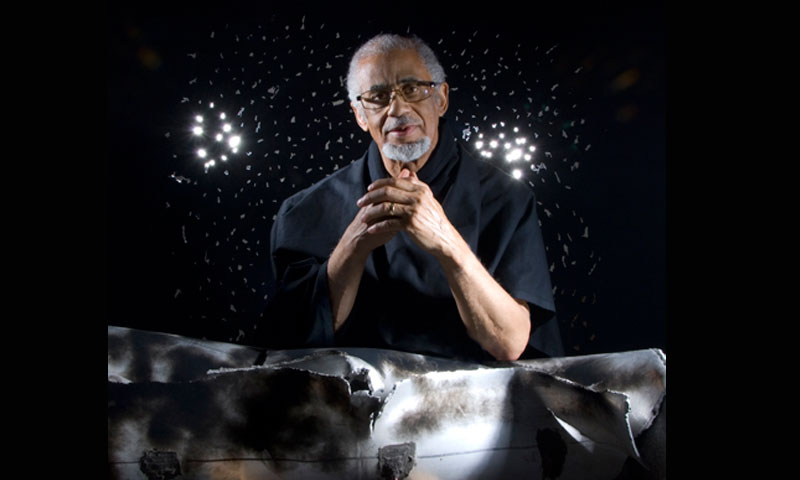 Physics Research Professor Ron Brown poses with the remnants of a torpedo casing similar to those he spent years developing in the aerospace industry. Brown was honored with the 2011 Richard W. Hamming Annual Faculty Award for Interdisciplinary Achievement during a ceremony, Mar. 15.

Brown began work at NPS in 2002 after retiring from a 40-year career in the aerospace industry as a way to fulfill his lifelong dream of teaching. His work is focused on modeling explosive detonation processes, shaped-charge jet formation, and high-velocity impact phenomena.

The award is named after NPS Professor Emeritus Dr. Richard W. Hamming and highlights a faculty member annually for their commitment to interdisciplinary achievement.

“Dr. Brown's contributions to the success and reputation of NPS go beyond his teaching and research contributions,” said NPS Executive Vice President and Provost Dr. Leonard Ferrari. “A true leader in his field, Research Professor Brown exemplifies Professor Hamming's commitment to interdisciplinary scholarship and is well deserving of this prestigious award.”

Ferrari pointed out Brown's collaboration in interdisciplinary projects and student mentorship such as his service as a primary advisor for 38 NPS thesis students in applied physics, mechanical engineering, electrical engineering, and operations research. He also mentioned his interdisciplinary projects like the lightweight torpedo and improvised explosives, as well as his current co-instructing of a counter IED (improvised explosive device) course offered in the operations research department.

“I am overjoyed with the acknowledgement of my work,” said Brown. “I’m very grateful for the opportunities provided here at the Naval Postgraduate School to follow a lifelong dream of teaching and, recently in life, a desire for contributing to the education and critical decision-making of our fine armed forces members.”

In a broader spectrum, Dr. Brown’s work has lead to the development of warheads for many NATO weapon systems, including improvements for the U.S. and Swiss DRAGON Anti-Armor, the MK50 Torpedo, and the Instalaza C-90RB man-portable, anti-armor system. Just prior to his retirement from BAE Systems, he worked on the development of the Mongoose wide field area minefield neutralizer, for which Dr. Brown holds a U.S. patent for the shaped-charge explosive neutralizer.

He continues to do research on shaped charges and other projects that have a significant impact on explosive behavior. One of his projects has led to the development of a universal technique for accelerating detonation. He recently applied this technology for enhancing explosive warhead performance and for initiating extremely insensitive materials (IM) to high-order detonation. IMs are materials that can be handled very freely without the fear of detonation under normal conditions.

“Some of these explosives are extremely insensitive,” said Brown. “You can bounce them on the floor and they won’t go off, you can hit them with an explosive and they won’t go off – but we can apply our process to them and essentially get performance out of them that is greater than you get with high energy explosives.”

He has an active collaboration with workers at the University of Illinois. Brown’s enthusiasm for teaching and interest in research has also taken him overseas where he teaches at Helmut Schmidt University, one of the universities of the German Federal Armed Forces in Hamburg. Brown teaches in the mechanical engineering department and conducts hypervelocity impact research at the Ernst Mach Institut in Freiburg, Germany.

Brown stated that working with students was an important aspect of his work at NPS. He said that one of his driving forces was helping students understand the technical aspects of his field but more importantly to focus on where they get their information and how to process it. He attributes his success to all of these aspects.

“The contributions cited in this award,” said Brown, “resulted from close working relationships with dedicated and well-motivated student researchers and very rewarding collaborations here and abroad, and by the continuous support from the Office of Naval Research.”

Brown’s contributions to NPS research and education are significant, but before he joined the university he was on a completely different path. He was just retired from his career in the aerospace industry and on his way to start a new life in Arizona when he got the offer to work at NPS. It was an opportunity to fulfill that lifelong dream of teaching, and he accepted it immediately.

But it did come with a price … He now he shares his time between Monterey and Tucson. When asked how long he intends to continue this life, he says with a smile, “I guess I can convince my wife to let me keep doing this a little while longer.”