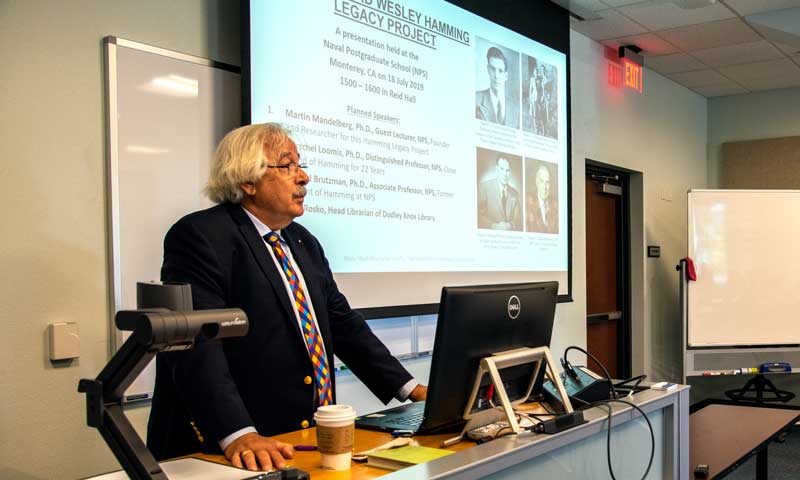 NPS alumnus Dr. Martin Mandelberg presents the Richard Wesley Hamming Legacy Project during a campus presentation, July 18. The 30-month project includes a select compilation of 30,000 pages of the iconic professor’s research findings, an online archive of lectures on video and much more.

Mandelberg, who was Hamming’s only doctoral advisee, reflected on Hamming’s teaching career and mentorship, which spanned 22 years at the university from 1976-1998.

“He developed early on the skills, knowledge and insights to mentor people,” said Mandelberg. “He liked being the research mathematician that helped you with your problem. He was a perfect professor to help people with their master’s thesis because he could hop from problem to problem.

“You should be rewarded for what you attempt because there are things to be learned in failure, and Hamming knew that,” he continued.

“[Hamming] is a great role model to set the standard,” said Lt. Ashton Miller, an NPS electrical engineering student who is looking forward to the great resource that will be available to him and the rest of the student body in the near future.

“Hamming was a good and valued friend,” said Dr. Herschel Loomis, NPS Distinguished Professor and a colleague of Hamming. “One of the great privileges of my career was to be able to work with this intellectual giant on a daily basis.”

Hamming was one of the world’s most distinguished computer scientists, best known for his work in coding and information theory developing innovations known as the Hamming code and the Hamming spectral window. He was director of the Manhattan Project Computing Facility, and later at Bell Labs, he introduced error-correcting codes and performed pioneering work in operating systems and programing languages.

The donated contents of the Richard Wesley Hamming Legacy Project will join the current Richard W. Hamming Collection at the Dudley Knox Library that includes his annotated papers from 1947-1997, scientific medals and awards such as the Piore Award, Turing Prize and Institute of Electrical and Electronics Engineers Hamming Medal, lecture videos, diaries and photographs.