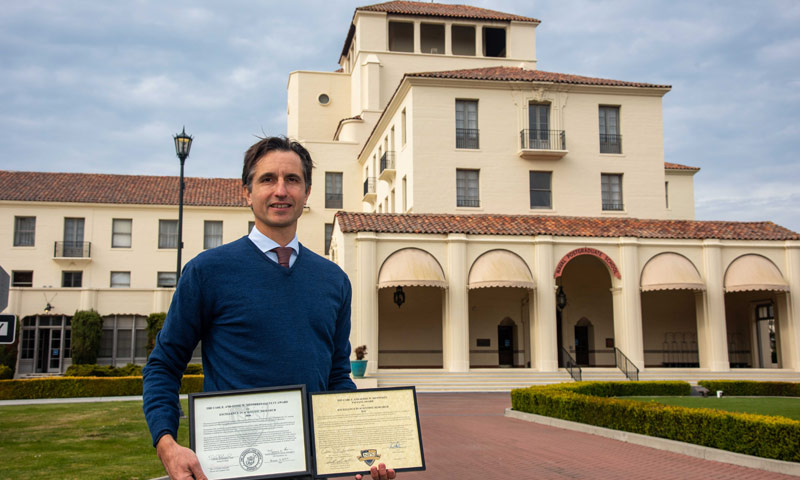 With the announcement of the 2021 winners of the Menneken Awards for Excellence in Scientific Research, Dr. Marcello Romano became a rare dual winner, recognized for sustained contributions this year and in 2006 as a junior faculty member. Romano joins Dr. Di Zhang of the Electrical and Computer Engineering Department as the latest winners of the prestigious research award.

Dr. Marcello Romano of the Department of Mechanical and Aerospace Engineering, and Dr. Di Zhang of the Department of Electrical and Computer Engineering, have been named the 2021 winners of the Carl E. and Jessie W. Menneken Research Awards. Presented annually, the Menneken awards recognize two Naval Postgraduate School (NPS) faculty for exceptional scholarly research that has a direct impact on Navy and defense operations.

The Menneken Award for Highly Meritorious Research, won by Zhang, recognizes a junior NPS faculty member who has exhibited outstanding research achievement in science, engineering or technology. Zhang’s research involves the development of power electronics and energy conversion systems for the Navy’s most advanced shipboard applications. He has been issued 35 U.S. patents with three pending patent applications, published 22 papers in top IEEE journals, and presented 22 papers at leading international conferences.

“It’s a great honor and also kind of a surprise,” said Zhang. “My mentoring team really gave me a lot of support and encouragement. They told me that based on what we have achieved, maybe I can submit a package and I might just win it.”

The Menneken Award for Significant and Sustained Contributions, presented to Romano, is given to a senior faculty member whose work represents a sustained impact on the effectiveness of the U.S. Navy and DOD.

Romano has been a staple at NPS since joining the faculty in 2004. He is a member of NPS’ Space Systems Academic Group (SSAG), is a founding director of the university’s Spacecraft Robotics Laboratory and serves as a lead for NPS on NASA’s Astrobatics Project.

He is also a rare two-time winner of the Menneken, receiving the award for Highly Meritorious Research as a junior faculty member 15 years ago.

“It's a very meaningful achievement for me,” said Romano. “Especially considering that at the beginning of my career in 2006, I won the junior Menneken Award. The first one was a very important push for my career and a great energizing event, and now winning the senior one kind of ties my career back and it comes full circle.”

Romano’s award-winning research has focused on the areas of spacecraft proximity maneuvering and orbital robotics, which are of critical importance with direct applications to defense activities in space.

The Astrobatics project aims at developing and testing new dynamic models, and guidance and control algorithms for the maneuvering of autonomous robotic spacecraft. The project utilizes NASA’s “Astrobee” free-flying robotic vehicle inside the International Space Station, with the ultimate goal of developing autonomous robotic assistants for future NASA astronauts.

The Astrobatics Engineering and Operations team lead, Dr. Jennifer Hudson, SSAG Research Associate Professor, has worked very closely with Romano for the last few years, and says he is very deserving of the award.

“He's great,” Hudson said. “He's really well respected within the international research community and has mentored a lot of students who have gone on to have pretty impressive careers in their own right. He's been a great mentor for a lot of people, and sort of spread his influence throughout the research community.”

Romano attributes his success to those that have helped him along the way and says that he could not have replicated his achievements anywhere else in the world.

“I sincerely think that NPS is a unique environment,” he said. “And what I have achieved, the way I have achieved it, would have not been possible elsewhere because of the professionalism and the self-motivation of our students.”

Established in 1988, the Carl E. and Jessie W. Menneken Awards for Excellence in Scientific Research are sponsored by the Naval Postgraduate School Foundation. The Menneken Endowment is used to provide annual awards to faculty, recognizing highly meritorious research with identifiable impact on the Navy and DOD technology.