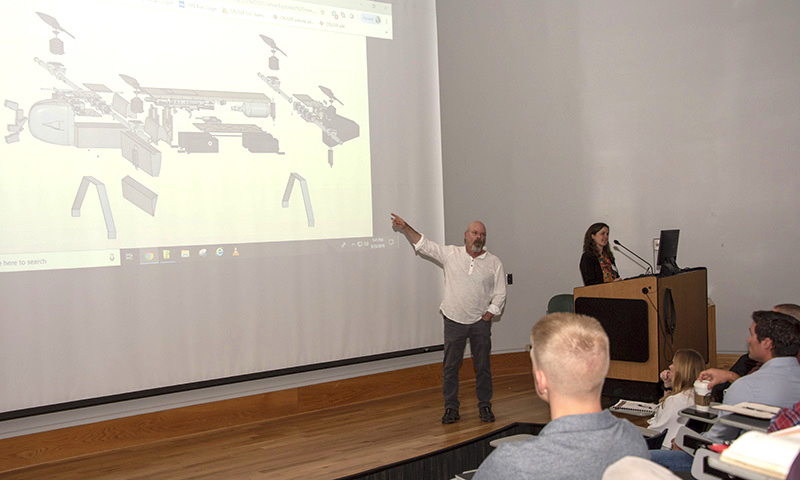 Hosted by the Consortium for Robotics and Unmanned Systems Education and Research (CRUSER), the workshop positions the officers and engineers as military planners in small teams to compete in a hypothetical war in the year 2030.

The challenge … Ethically and effectively utilize autonomous warfare systems in an urban, littoral environment. The workshop scenario then allows the teams to brainstorm, propose new technologies, and offer employment concepts based on the given scenario.

“The WIC workshop is not just a seminar, workshop, or wargame. It’s kind of a hybrid of all three,” said retired Navy Capt. Jeff Kline, coordinator for the WIC workshop and a Professor of Practice for NPS’ Operations Research department. “Where most innovative workshops focus on one or two particular problems or products, we use design-based thinking and design-based thinking facilitators, with a real scenario backdrop to net all kinds of diverse ideas to address complex problems.”

The participants’ brainstorming sessions and theoretical plans for a simulated scenario aren’t just left on a whiteboard in the NPS classroom. A realistic sense of urgency is conveyed, as concepts leaving the WIC become ideas to direct further research.

“We have two products that come out of this workshop that are about shaping the future of naval warfare,” said CRUSER Director Dr. Brian Bingham. “One product is the concept generation produced throughout the workshop. The other product is everyone involved who has been challenged to think about how to solve big hairy problems, while working with a bunch of people they don’t know from different backgrounds.

“The worldwide conflict of the workshop’s scenario challenges sea lines of communication between the United States across the Atlantic and Pacific,” he continued. “What makes it challenging is that our sea lines of communications haven’t been challenged by a peer competitor since World War II. We haven’t had a conflict where our sea lines have been seriously challenged, but that’s no longer true. The force structure that we built in WWII to counter Japan and Germany is gone now, so we have to look for new ways of conducting logistics to support combat operations worldwide.”

Attendance for the WIC workshop has grown over the years due to the real-world relevance of its simulated scenarios.

“This year was the largest workshop we’ve had in 10 years,” said Kline. “We’ve had more commands represented than we ever had before because logistics is an issue that touches everything from the Pacific to the Atlantic.”

The WIC workshop included presenters from the fleet, industry and academia – all subject matter experts who briefed participants on current logistics and projects in development. Even a celebrity, for those fans of the Discovery network, was part of the lineup, M5 Industries co-owner and former “MythBusters” host Jamie Hyneman, who presented a prototype counter drone system.

“The teams got a chance to talk to those people who made the presentations and could perhaps incorporate those ideas and concepts into their plans,” said Kline. “The participants now have a much better appreciation for the complexity of the logistics problem, and they can go back to their various laboratories, classrooms or careers to start thinking about ways to tackle problems. We’ve even had several students participate specifically to gain ideas to prototype specific technologies that should mature over the next 12 to 18 months.”

According to Kline, NPS is one of the few institutions that combines student ideas, industry ingenuity and military objectives in its approach to solving complex challenges.

“Many concepts and ideas can be addressed in a lot of places, but NPS has the unique environment where we have both the operational experience, the tactical experience, and the technology research to blend them together to develop new concepts and technologies that lead to solutions.”