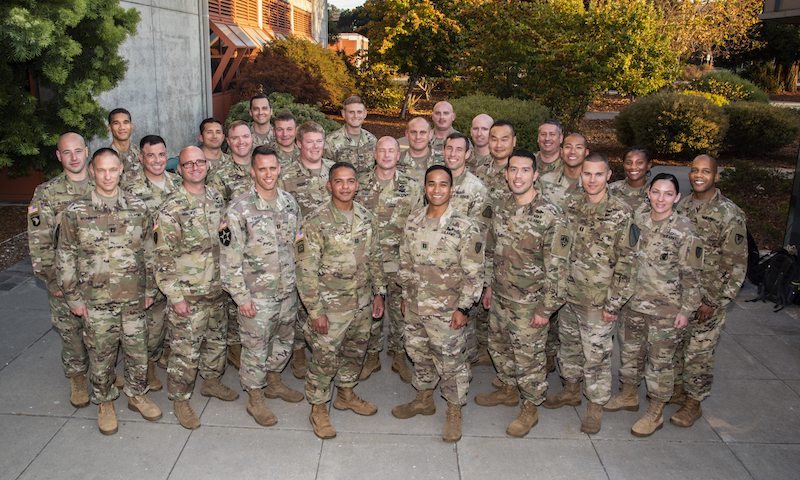 A cohort of 30 Army Acquisition Corps officers will be the first graduates from NPS’ new curriculum 522 in Systems Engineering Management. Developed with direct input from senior Army acquisition leaders, the modified curriculum represents a critical shift in advanced acquisition education.

On December 20, the first cohort of 30 Army Acquisition Corps Officers will graduate from a new degree curriculum, called 522, at NPS with a Master of Science Degree in Systems Engineering Management. In addition, most of those graduates will have completed their Joint Professional Military Education (JPME) and Army intermediate-level education at the Naval War College’s Monterey satellite campus.

Over the course of their graduate studies at NPS, students receive 34 different Defense Acquisition University course equivalencies as a concurrent benefit that saves them valuable time away from the acquisition work that needs to be done.

Those 30 officers can credit their new systems engineering management degrees to Lt. Gen Paul Ostrowski, the principal military deputy to the assistant secretary of the Army for acquisition, logistics and technology and NPS President, retired Vice Adm. Ann Rondeau, who sought for and steered the changes to the NPS curriculum in Army acquisition.

It was a big ask. And Ostrowski wasn't the first principal military deputy to request a technological upgrade to the program. Starting in 2011, three successive principal military deputies to the assistant secretary of the Army for acquisition logistics and technology (ASA(AL&T)) had asked for more science, technology, engineering and mathematics (STEM) in the systems acquisition management curricula at NPS, which has been sponsored by the Army since 1991. But it was Lt. Gen. Paul Ostrowski who really pushed for it to come about in 2017, collaborating closely with Rondeau.

Despite pushing for the technological upgrade to the NPS graduate education, Ostrowski said it was Rondeau and her faculty who were the real change agents. It took some heavy lifting by the systems engineering faculty and the proponency office of the U.S. Army Acquisition Support Center as well. Several iterations of combined courses were staffed and modified for optimal composition and sequencing. It was a great example of how the relationship between the university and a curriculum sponsor can partner to advance education programs at NPS.

The two flag officers met face-to-face at NPS and immediately struck a partnership for the restructuring. We transformed the curricula from purely organizational dynamics to engineering reasoning applied in science and technology pursuits, while keeping the needed methodologies in contract and program management. Our end goals haven’t changed for the broader objectives of improved critical thinking, enhanced decision making and a larger professional network among the workforce.

Ostrowski is a 1996 alumnus of NPS, and a former student of mine. As we discussed proposed changes, he told me, “We have to recalibrate our graduate education at NPS.” He wanted NPS to focus more on product than process, emphasizing new capabilities over policies.

“We need more technical, less managerial. Our folks already know how to lead people. What they really have to manage in the acquisition arena is complexity,” he said. Recent studies of military capacity to execute national security and defense strategies showed a shrinking technological edge over our near-peer threats.

Realizing there weren’t many officers in the ranks with highly technical or engineering undergraduate degrees, the Army’s academic advisors at NPS observed that specialized degrees like engineering management were the fastest growing graduate education segments in the USA, while nonspecialized management programs were precipitously declining.

Also, the Government Accountability Office specifically cited a lack of systems engineering in many high-profile weapon system program failures. Large program cancellations of the past ten years included Future Combat System ($18.1B), Comanche ($7.9B) and Crusader ($2.2B).  Everything pointed to a need for more skills in the areas of systems engineering as well as the acquisition essentials of contracting, program management, and test and evaluation. A long-standing degree at NPS was the Systems Engineering Management degree for folks without an engineering undergraduate degree. With that as our foundation, we could easily integrate courses from across the campus.

MORE THAN BUSINESS AS USUAL
Over the next year, the NPS Department of Systems Engineering assembled the needed courses and faculty members to modernize and satisfy our sponsor’s shifting educational needs. With a palpable sense of urgency coming from the Pentagon and global challenges on the horizon, the Army’s 18-month master’s degree program at NPS reorganized to provide Level III Defense Acquisition Workforce Improvement Act (DAWIA) training equivalencies in three different disciplines: systems engineering, program management and contract management; with Level II in test and evaluation.

Ostrowski often says of the new programs, “This is what right looks like!” and added, “President Rondeau understands our current national security environment and helped us forge the path to meeting our new educational requirements.”

Since the first cohort, he has sent three additional groups of Army Acquisition Corps officers, arriving twice per year. There’ll be two more groups coming in January and June 2020, so even with the departure of this first large cohort, there’ll be around 80 officers on the ground in Monterey. That’s the biggest Army Acquisition footprint ever seen at NPS.

BIGGER AND BETTER
NPS leadership not only welcomed the changes Ostrowski requested, but also helped build a correlated distance learning program, curriculum 722, and awarding the same degree, for the Army’s multifunctional career field civilians in acquisition. As a part-time, 24-month degree program, it delivers DAWIA Level III certified training equivalencies in program management and systems engineering, along with Level II in test and evaluation and contracting fundamentals. More than 40 AAC civilians have already enrolled in that program, being centrally selected by the Office of the Army Director of Acquisition Career Management (DACM) within the U.S. Army Acquisition Support Center.

One of the striking aspects of both the resident and distance learning programs is the Capstone Thesis Project – and how it differs from a traditional master’s thesis. Projects are selected by the Army and other services, who “sponsor” the five-person student teams as they solve real-world problems with a time-phased, systems engineering approach. A pair of faculty project advisors is assigned to each five-person team to coach them through the six-month process of architecting solutions. In the end, the clients, the Systems Engineering department faculty and all of the other AAC students are briefed by each team on their project results.

Another NPS graduate, Lt. Gen. L. Neil Thurgood, director for hypersonics, directed energy, space and rapid acquisition and director of the Rapid Capabilities and Critical Technologies Office, visited NPS last June, and gave one of our six student teams their Capstone Thesis Project: to find an affordable radar that can be mounted on a ground combat vehicle and track targets on the move. This study directly supports what his team is doing at Redstone Arsenal to demonstrate a directed energy weapon system mounted on a Stryker combat vehicle in 2021. His message to our 62 assembled AAC officers was that the new 522 program was going to be extremely advantageous for them, because of their resulting qualifications to serve in either 51A and 51C assignments. Another high-achieving alumnus, he advised them that diversity of knowledge is often more important in acquisition than depth in any single field.

The other five teams conducted their capstone projects studying topics such as: multiple concepts of operations for swarms of unmanned aerial systems; an acquisition value model for SOF materiel, an analysis of contracting transactions in deployed vs. garrison environments; and, prioritizing Army Community Services funds allocation; and field experimentation of the Soldier-Borne Sensor for optimal display size.

CONCLUSION
The latest investment by the Army at NPS is the establishment of a new military position on the faculty, the Systems Engineering and Army Acquisition Chair, to help administer the Army’s programs and oversee them for the military deputy and DACM. Col. Joyce B. Stewart will be the first in the position, arriving in April of 2020. Coming from the Army’s Office of the Chief Systems Engineer and a seasoned program manager. COL Stewart will bring Army relevance and current perspectives from her recent experiences. Welcomed by President Rondeau as an NPS asset, she will help us move into the next decade, in support of all Army acquisition students at the school.

Overall, the new 522 and 722 degree programs deliver what Army leadership asked for: more technological relevance in an era of increasing threats, with students actually using the tools they’ve acquired before they leave for their follow-on acquisition assignments. Qualified to serve in a larger variety of assignments than ever before, our graduates are going to be able to contribute to warfighting readiness in the newest technological fields. They’ll be well-equipped to equip the warfighters.